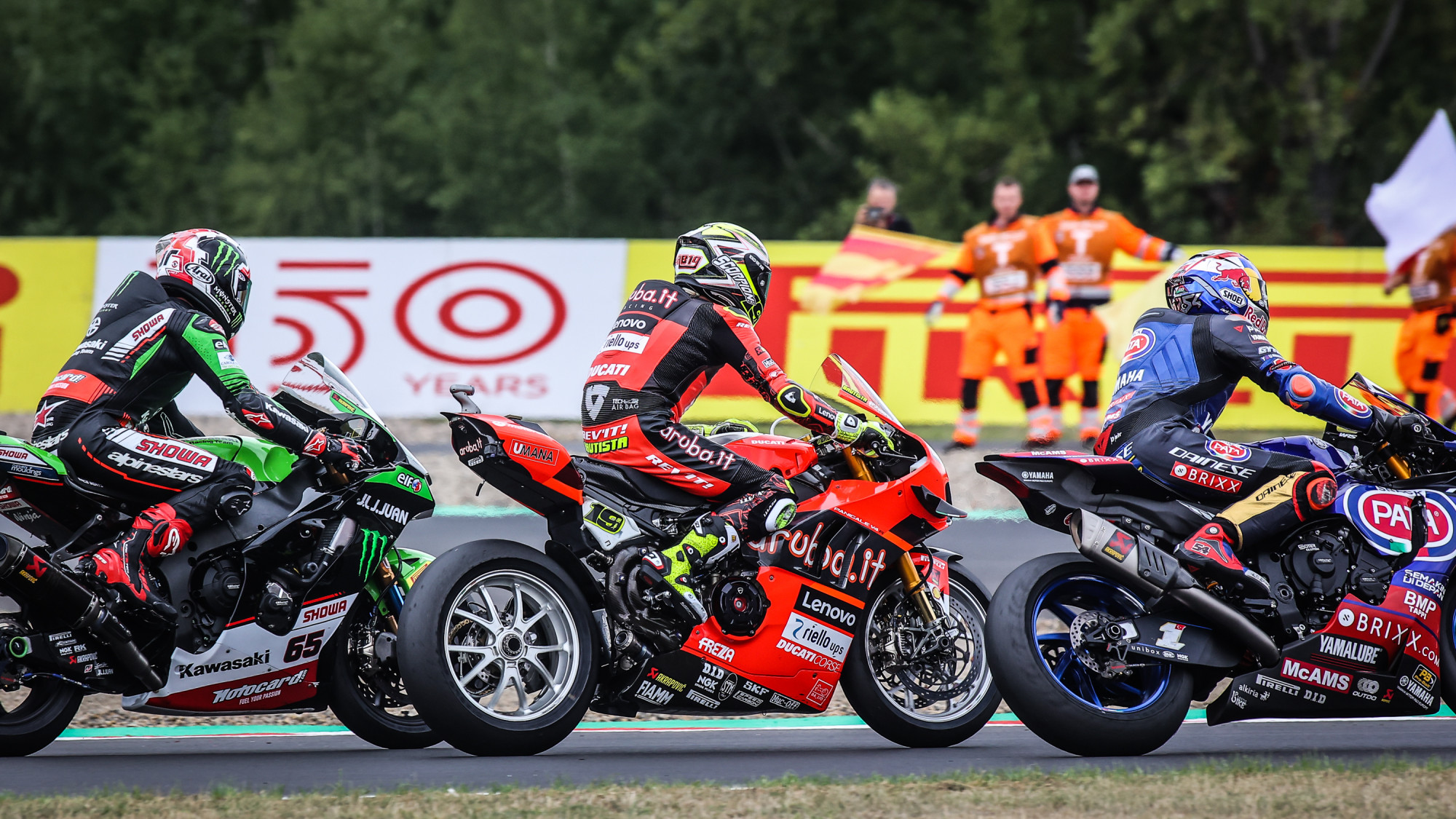 A fierce fight for the title has given plenty of stories, but there’ve been other chapters along the way

The 2022 MOTUL FIM Superbike World Championship enjoyed a well-deserved summer break but that doesn’t mean that we can’t take a quick lesson from the first part of the season. From tussles to tumbles, final lap thriller to outright domination, technical innovation to tyre development, we delve deep into WorldSBK’s findings from the opening six rounds of an enthralling season so far.

They’ve been battling all year and they’re the three riders who are the favourites for the Championship, it’s just anyone’s guess as to who it will be who clinches it. The titanic trio of 2022 have raised the bar, but the battles have been fierce too. Alvaro Bautista (Aruba.it Racing – Ducati) leads the Championship standings after seven wins so far, but he’s had to fight for them with six-time World Champion Jonathan Rea (Kawasaki Racing Team WorldSBK) and reigning World Champion Toprak Razgatlioglu (Pata Yamaha with Brixx WorldSBK). Rea took on Bautista in Race 1 of the year to triumph, whilst at Assen, arch-rivals Razgatlioglu and Rea collided and crashed together. At Estoril, all three faced each other in head-to-head final lap fights, whilst Bautista was the man to beat at Misano and Razgatlioglu achieved a career-first triple at Donington Park, whereas Most was totally unpredictable and saw all three fight for victory. All three are covered by 38 points going into the second half of 2022 and with all three set to continue in 2023, the story is only just beginning.

Four third places from the first four races of the year, a second and then a crash with his main rival; Razgatlioglu hadn’t got off to the best title defence and he was robbed of victory on the last lap twice at Estoril. However, a dominant first win of the season in the Superpole Race at Misano saw Razgatlioglu return to the top, and a magical hat-trick at Donington Park saw him deliver his rivals a Great British Sunday roast. A double at Most too, the gap has come down from a high of 79 points to 38 and whilst there’s a long way to go (in terms of races and in terms of points to the Championship lead), anything can happen – as was the case in 2021. The Turkish star has shown he can fight back and that he’s willing to lay it all on the line to retain the title, but can he go on to do it?

TYRE TALK: more crucial than ever in 2022

The SCQ tyre’s arrival in WorldSBK has seen lap records tumble and it’s also been a race winner, with Toprak Razgatlioglu dominating the Superpole Race at Donington Park. However, tyre choice has also been critical, with the SCX tyre featuring two development options at Misano, as well as two evolutions of the front SC1. The latest development was for Most and a new SC0 rear, which many riders seemed to like, with development tyres have worked well so far. Of all the races won, 11 have come with a development front whilst on the rear, five races – although development rear tyres have only been available since the continental summer kicked in at Misano. Razgatlioglu has won all of his races with the SCX standard tyre, in which the SCX in general has won 14 – including two wins for the SCXB tyre at Misano. The SC0 has won three races, of which two came at Most when it was the softest available in the full races. So, after all that data, we can say that the tyre evolution throughout the season is seeing teams do their homework and make sure all options are covered. We can expect that to continue as Pirelli keep developing in the second half of 2022.

BMW MAKE GAINS: dark horses for the second half of the season

One thing we’ve learnt from the start of the season to the mid-way point is that BMW are definitely keen to get to the front, as you’d expect. However, now they’re right there, with plenty of positivity emitting from the garage at Donington Park and again at Most. The German manufacturer endured a torrid start to the season, with Scott Redding (BMW Motorrad WorldSBK Team) is on record as ‘questioning his decision’ after scoring a single point from the first round. However, hard work, tenacity and development of parts away from the track has seen Redding at the front once again, with a first podium in Donington Park’s Tissot Superpole Race as well two further top fives that weekend, whilst a first full-race podium came in Most’s Race 1, where he beat Jonathan Rea (Kawasaki Racing Team WorldSBK) in a final lap shootout. BMW’s new swingarm, which debuted at Donington Park, and the subsequent geometry changes have seen them rise and Michael van der Mark (BMW Motorrad WorldSBK Team) hasn’t even returned yet… exciting times ahead.

The first half of 2022 has actually been a tale of two halves at Team HRC. At the start of the year, Iker Lecuona was on mighty form and bagged a podium in just his sixth race in Race 2 at Assen, and he was quick despite a mudguard failure at Estoril too. Then, bouncing back from injury, teammate Xavi Vierge was in the top five at Estoril, whilst he was battling for a podium with Jonathan Rea in Misano’s Superpole Race after a gamble on the SCQ tyre paid off. However, Vierge picked up an injury in Race 2 at Misano after a collision with Axel Bassani (Motocorsa Racing), whereas Donington Park and Most were brand new circuits for both riders. A new swingarm has been brought and whilst not a major change, it’s an evolution, as the project continues to make steps. After relative success at the Suzuka 8 Hours and team manager Leon Camier previously stating that we should ‘expect to see gains’ in the second half of 2022, could we see Honda and BMW be regular podium contenders?

As is always in WorldSBK, the Independent teams have the chance to mix it up with the factory outfits. So far, it’s going well for Axel Bassani and the Italian youngster has made no bones about it that he wants to beat Michael Ruben Rinaldi (Aruba.it Racing – Ducati) for a factory ride in 2023. Then there’s Loris Baz (Bonovo Action BMW), who has been doing a good job and is in a big fight for the top ten overall, although Bassani is 50 points ahead as he chases a top six. Garrett Gerloff (GYTR GRT Yamaha WorldSBK Team) continues to be enigmatic in the races despite pace in Free Practice, whilst Philipp Oettl (Team Goeleven) has shown potential but is yet to consistently convert it. Expect to see the likes of Luca Bernardi (BARNI Spark Racing Team) and Lucas Mahias (Kawasaki Puccetti Racing) come good in the second half of 2022, particularly Bernardi who took a first top ten at Most.

2023 SILLY SEASON: rumours, gossip and done deals for next year

With it being that time of year and a lengthy summer break in August, most teams have decided to announce line-ups either side. However, the factory Yamahas, Kawasakis and BMWs are already signed up and there’s no change; the 2022 line-up rolls over for 2023. Championship leader Bautista will remain in the Bologna red of Ducati, whilst Iker Lecuona has a deal already in place at Honda. However, the second seats at both of those manufacturers are up for grabs. Independent teams have been a bit behind the factories (as is the usual way in the market), but Philipp Oettl and Luca Bernardi are already in for next year, having signed two-year deals when they graduated at the start of this year. Eugene Laverty (Bonovo Action BMW) will retire as a rider but will remain an integral part of his current team, where he’ll be co-owner as well as rider coach and undertaking test rides and marketing activities. You can get a full look at how 2023 is shaping up with all the rumours here!

Enjoy all of 2022’s battles LIVE and OnDemand wherever you are with the WorldSBK VideoPass!