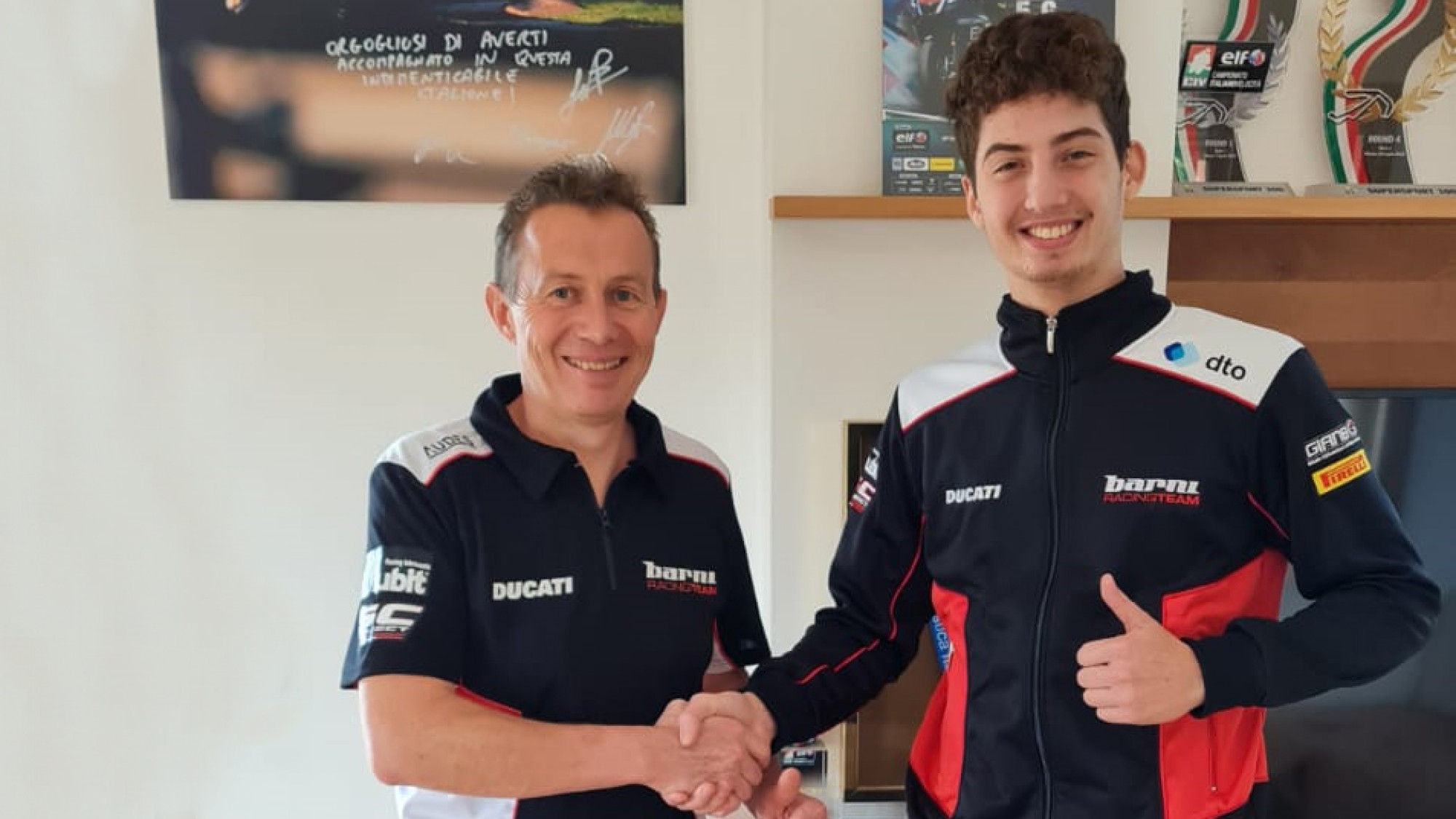 With the 2021 MOTUL FIM Superbike World Championship coming into its closing stages, the 2022 grid is filling up and the latest addition to form part of the 2022 line-up is Luca Bernardi, with the Sammarinese youngster stepping up to the class with the Barni Racing Team. Bernardi has been one of the stand-out riders in his rookie WorldSSP season and has impressed enough to earn himself a ride in the world’s fastest production-based World Championship. Bernardi will also make history in the WorldSBK paddock, becoming the first rider from the 21st century to race in WorldSBK, given his birthday is 29th August, 2001.

Bernardi first came into the WorldSBK paddock in 2017 in World Supersport 300 as a wildcard at Imola, where he achieved a respectable seventh. Later that year, he won the Italian Supersport 300 championship before stepping up to World Supersport 300 in 2018, scoring two top five finishes with a fourth at Misano and a fifth at Magny-Cours. However, after moving to the CIV Supersport class in 2019 and taking a pole and a podium, he clinched the crown in 2020 with four wins and seven podiums, never once qualifying outside of the first two places on the grid. He took five podiums in his rookie World Supersport campaign before it was cut short by injury at Magny-Cours, where he took his first ever pole position.

Graduating to the Barni Racing Team, Bernardi is one of WorldSBK's hottest prospects: “Racing in Superbike is a dream that has come true. I decided to accept the offer from the Barni Racing Team because they proved to me that they believe in my growth more than anyone else. Marco Barnabo stood by me even after the Magny-Cours crash, and he decided to bet on me even after the accident. I want to thank him for this opportunity, and I’ll try to adapt quickly to the bike, trying to be competitive as soon as possible. I'm looking forward to getting to know the team and I hope to start working with them very soon.”

Team principal Marco Barnabo is also excited and hopes that his team can once again challenge for the Best Independent award, something his team won back in 2018: “I have been following Luca since the beginning of the season and his performance has impressed me since the first rounds. His growth has been steady, but also very fast. He immediately went strong in World Supersport, even on tracks he had never seen before, and this convinced me to invest in him. In the next two years, we want to give him the opportunity to grow with the right time to prove his worth and our team will invest providing him a bike with the same components as the Ducati factory team.”

Bernardi is the latest rider to join the WorldSBK grid for 2022, and you can read all about it here, with the latest signings and rumours ahead of the remainder of the year. Of the seats that remain available or unannounced, there’s both Team HRC bikes, as well as Team GoEleven, Kawasaki Puccetti Racing ride, Orelac Racing VerdNatura Kawasaki, MIE Honda, Bonovo MGM Racing BMW, Motocorsa Racing Ducati, Gil Motor Sport Yamaha and one OUTDO TPR Team Pedercini Racing Kawasaki.

Watch the 2021 season unfold in the last two rounds with the WorldSBK VideoPass!