The 2021 MOTUL FIM Superbike World Championship is already being prepared and the rider signings are being penned down, as Isaac Viñales will step up to the WorldSBK category with the ORELAC Racing VerdNatura. The Valencian team enjoyed top ten success with Chilean rider Maximilian Scheib in 2020 but it’ll be a new rider who will spearhead their charge for the best Independent team in the upcoming year.

Viñales, born in Llansa, Spain, was in the Moto3™ World Championship from 2012 but a breakthrough the year in 2014 saw him take podiums. He stepped up to Moto2™ in 2016 but with only a few top ten results, came to WorldSSP in 2019, joining the Finnish Kallio Racing Yamaha team. Podiums have earnt him a place in graduating to the premier class for 2021, with a team that in the past have enjoyed battling for the top six and who look forward to returning to that with the 26-year-old.

Speaking about the deal, Viñales said: “I am very happy to be part of ORELAC Racing VerdNatura for the 2021 season. After the progression of this last year, it is a challenge for me to make the leap to WorldSBK and have the opportunity to show my full potential. I am enormously grateful to all the people who make up the team, who have placed their trust in me, and I am sure that together we will work and achieve great success.”

Follow all of the trials and tribulations of the off-season and watch all the big-battle classics with the WorldSBK VideoPass! 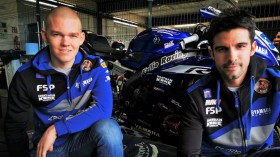