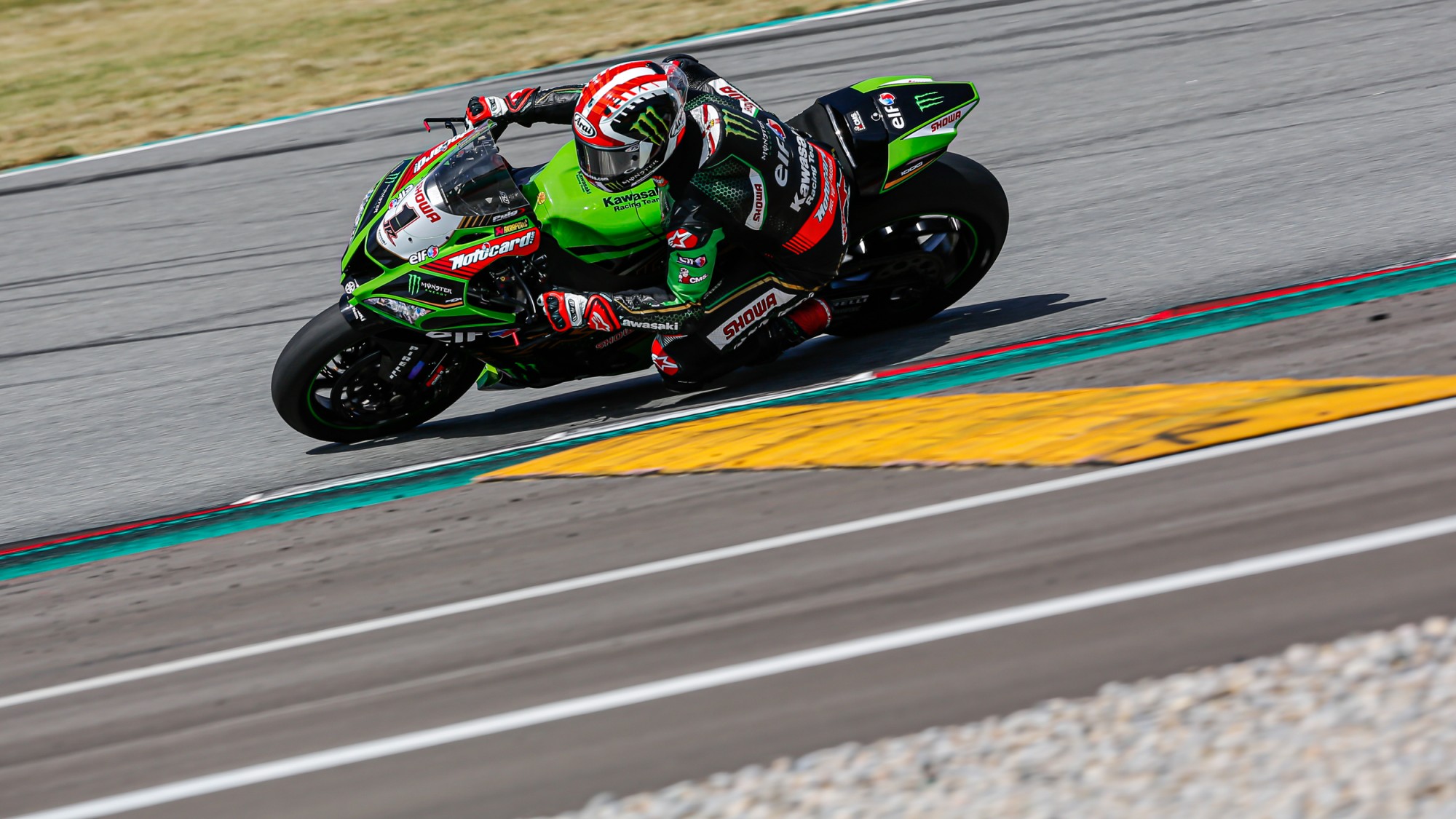 The two-day test at the Circuit de Barcelona-Catalunya for the MOTUL FIM Superbike World Championship teams and riders has concluded with many talking points before the first round. The scorching heat, high track temperature and slippery circuit meant that crashes and Red Flags were in abundance and that times for the top ten didn’t improve on this morning’s session, leaving Jonathan Rea (Kawasaki Racing Team WorldSBK) as the rider to beat, albeit by the slimmest of margins.

After times failed to improve in the afternoon, Jonathan Rea leads the way on exit from Montmelo. The Ulsterman set a blistering lap in the morning session that was never headed, meaning he leaves the test with a good feeling aboard his ZX-10RR. Teammate Alex Lowes backed up the team’s efforts with fourth as the Championship leader continued his adaptation from Yamaha to Kawasaki. Working on rear end set-up and acclimatising to the changes of direction, Lowes has already built on refining his braking style from day one. All in all, a strong showing for the Spanish-run squad.

With track temperatures almost hitting 50°C today five times WorldSBK champion Rea finished up with a best lap of 1.41.911. First year Kawasaki signing Lowes, the championship leader after the opening round in Australia, set a best of 1’42.318. One more day of testing remains at the 4.627km long circuit located within a stone’s throw of the team’s headquarters in Granollers.

It was another British rider in second place as Scott Redding (ARUBA.IT Racing – Ducati) led Ducati’s charge in Catalunya. The rookie was top in the afternoon session and come the close of day one and was a mere 0.156s behind Rea overall after day two. His goal was to work on the bike’s performance in hot conditions, although this was hampered by two technical gremlins throughout the day; one in the morning and one in the afternoon. Chaz Davies (ARUBA.IT Racing – Ducati) worked on chassis direction was fourth this afternoon and finished ninth overall, although race pace looks good.

The BMW Motorrad WorldSBK Team had a very strong showing on day two, with Tom Sykes leading their charge in third place. The 2013 World Champion was one of just three riders in the 1’40s after the morning session and enjoyed his first time out at the circuit, doing plenty of race simulations. Teammate Eugene Laverty was also right in the mix and concluded the top six overall and was just over a second from top spot, despite a crash in the morning on the Q tyre. Neither finished inside the top ten during the hotter afternoon session as both worked on race pace, eager to get the bike dialled in on the new circuit.

The first Yamaha on the timesheets was in fifth place and Toprak Razgatlioglu (PATA YAMAHA WorldSBK Official Team). The tenacious Turk wrestled his Yamaha into position after getting back up to speed, although a morning crash at Turn 7 and afternoon technical issues suggested that it wasn’t all plain sailing. Teammate Michael van der Mark also had a morning technical problem as he concluded the test on seventh. The aim for the Dutchman was to focus on rear grip whilst both riders aimed at just getting laps under their belt.

The first of the Independent riders came home in eighth place overall and that was Loris Baz. The French star was on the pace on his 2020 Yamaha R1 and focussed on tyre life in hot conditions and his work gave him third in the afternoon on day two. However, Leandro Mercado (Motocorsa Racing) made it two Independent teams in the top ten and despite an afternoon tumble between Turn 2 and 3, was seventh in the afternoon and tenth overall. It was a great afternoon showing for Garrett Gerloff (GRT Yamaha WorldSBK Junior Team) and teammate Federico Caricasulo; they were eighth and eleventh this afternoon, with Gerloff just missing out on an overall top ten.

After missing much of the entire morning session, Team HRC were out on track in the afternoon heat. Leon Haslam was up inside the top five after lunch but finished in ninth, whilst Alvaro Bautista was cemented to 15th, and whilst not testing any new parts, electronics refinement was key. Haslam would end up 12th overall whilst Bautista was 15th but not a full day on track, the potential is yet to be reached for the team and its new Honda CBR1000RR-R.

In World Supersport, it was Jules Cluzel (GMT94 Yamaha) who shone the brightest as he got his YZF R6 into a good position at a circuit he knows extremely well. Steven Odendaal (EAB Ten Kate Racing) was second ahead Cluzel’s teammate, Corentin Perolari, who suffered a small crash in the morning session but was otherwise OK.

Get ready for the return to action as World Superbike awaits the first green light in five months with the WorldSBK VideoPass!