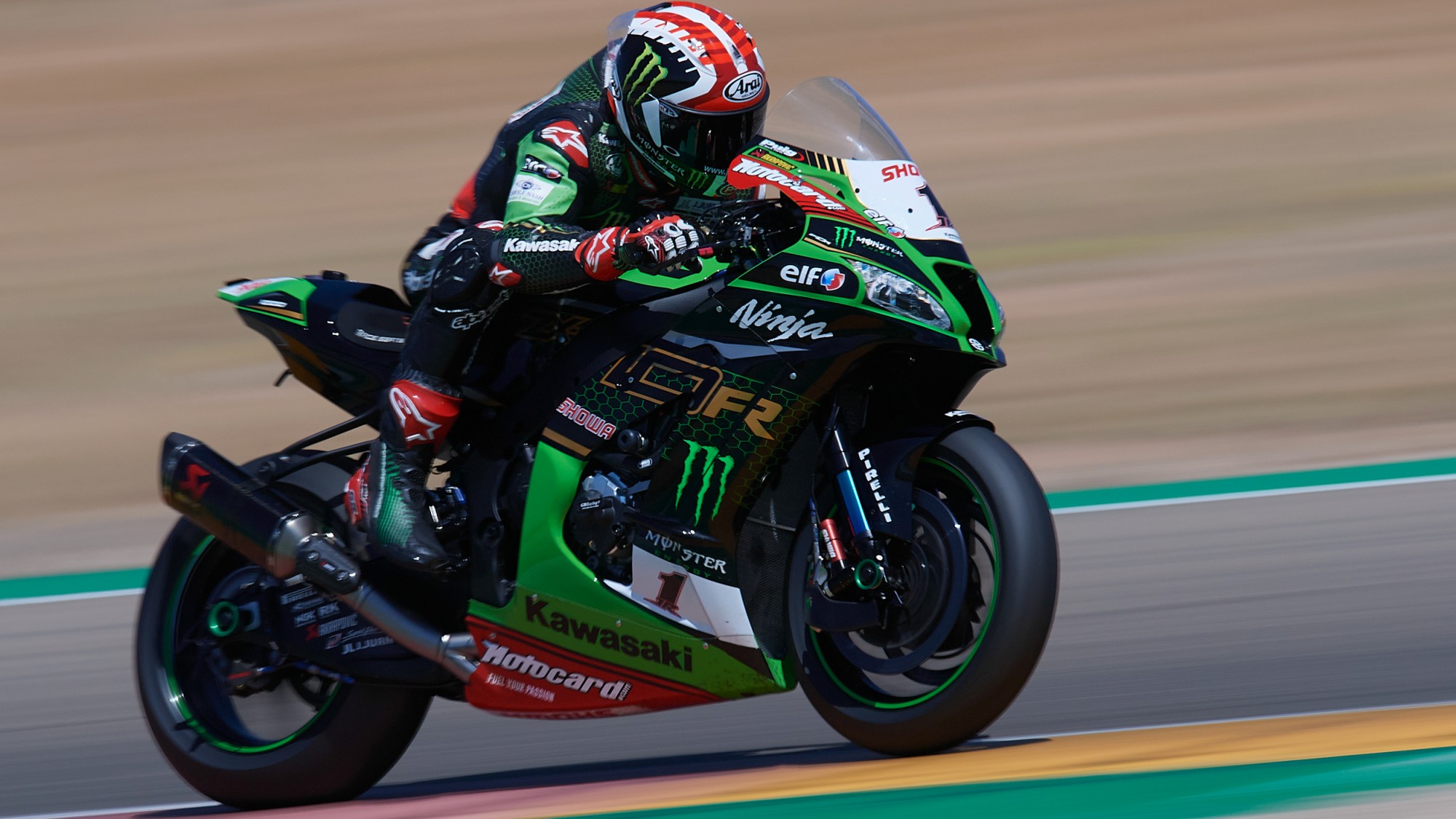 A blissfully sunny afternoon concluded day one of the MotorLand Aragon test for the MOTUL FIM Superbike World Championship. The stunning setting, just a stone’s throw from Alcañiz, saw times tumble throughout the day, as well as WorldSBK debuts and returns. At the end of it all though, it was Jonathan Rea (Kawasaki Racing Team WorldSBK) who managed to maintain his advantage, whilst Honda were once again mightily impressive and the top eight were all covered by under a second.

Jonathan Rea went into the midday on top of the timesheets and improved his time at the end of the opening day too, 0.375s quicker than 2019 teammate Leon Haslam (Team HRC). Rea spent most of the day working on perfecting the setting of his ZX-10RR are for what his crew chief Pere Riba branded as the “most important rounds of the season” and worked on the twists and turns of the track, rather than outright top speed down the long back straight. Teammate Alex Lowes was aiming to regain some confidence and was  sixth come the end of the day.

HRC’s testing programme at MotorLand Aragon back in July seemed to work wonders for Leon Haslam, as the British star finished second on the timesheets. Haslam has been struggling in the high temperatures of the last rounds at Jerez and Portimao and with track temperatures well into the 50s today, progress has certainly been made. Teammate Alvaro Bautista backed up Honda’s efforts and placed fourth at the track where he stormed to a triple in 2019. After the first day, Honda are the only manufacturer to have both bikes inside the top five.

Making it three manufacturers inside the top three, Scott Redding (ARUBA.IT Racing – Ducati) spent his morning working on front-end feel, something he missed during the Motul Portuguese Round. He made a step in his final run, whilst for the afternoon, he worked on front-end and rear-end grip, whilst also attempting to better understand how the bike will work in the high heat of Aragon – something that the team won’t know from previous years. On the other side of the garage, teammate Chaz Davies was seventh and wasn’t working on new parts but focused on chassis set-up.

The first of the Yamahas was Toprak Razgatlioglu (PATA YAMAHA WorldSBK Official Team), who placed fourth after trying out new parts to the swingarm and to steering. They were already on the bike, but Toprak and crew chief Phil Marron seek clarity on their impact. The Turkish star didn’t have the best weekend for Kawasaki last year and has a bit of learning still to do on the Yamaha, although reliability is categorically not a concern. Michael van der Mark (PATA YAMAHA WorldSBK Official Team) aimed at finding a solution to set-up issues in the heat and claimed that should it be solved for Aragon; it’ll be solved everywhere. The Dutchman was a solid eighth come the close of business.

The first of the Independent riders was Maximilian Scheib (ORELAC Racing VerdNatura), who was ninth and elected to work on race pace, the only thing he feels was missing. He wasn’t the only one on the bike as Can Öncü got 10 laps under his belt. The WorldSSP rookie got a taste of the action in WorldSBK and will be back for more tomorrow. Roman Ramos (OUTDO TPR Kawasaki) returned after a year-and-a-half out, taking tenth in place of the injured Sandro Cortese. It was the Spaniard’s first time on Showa suspension, so he was busy throughout the day. Sylvain Barrier (Brixx Performance) was the last of the WorldSBK runners, whilst Andrea Locatelli (BARDAHL Evan Bros. WorldSSP Team) was the only World Supersport runner, testing some new things on the bike.

The top six following day one of testing at MotorLand Aragon:

Enjoy the 2020 World Superbike season in fine style with the WorldSBK VideoPass!