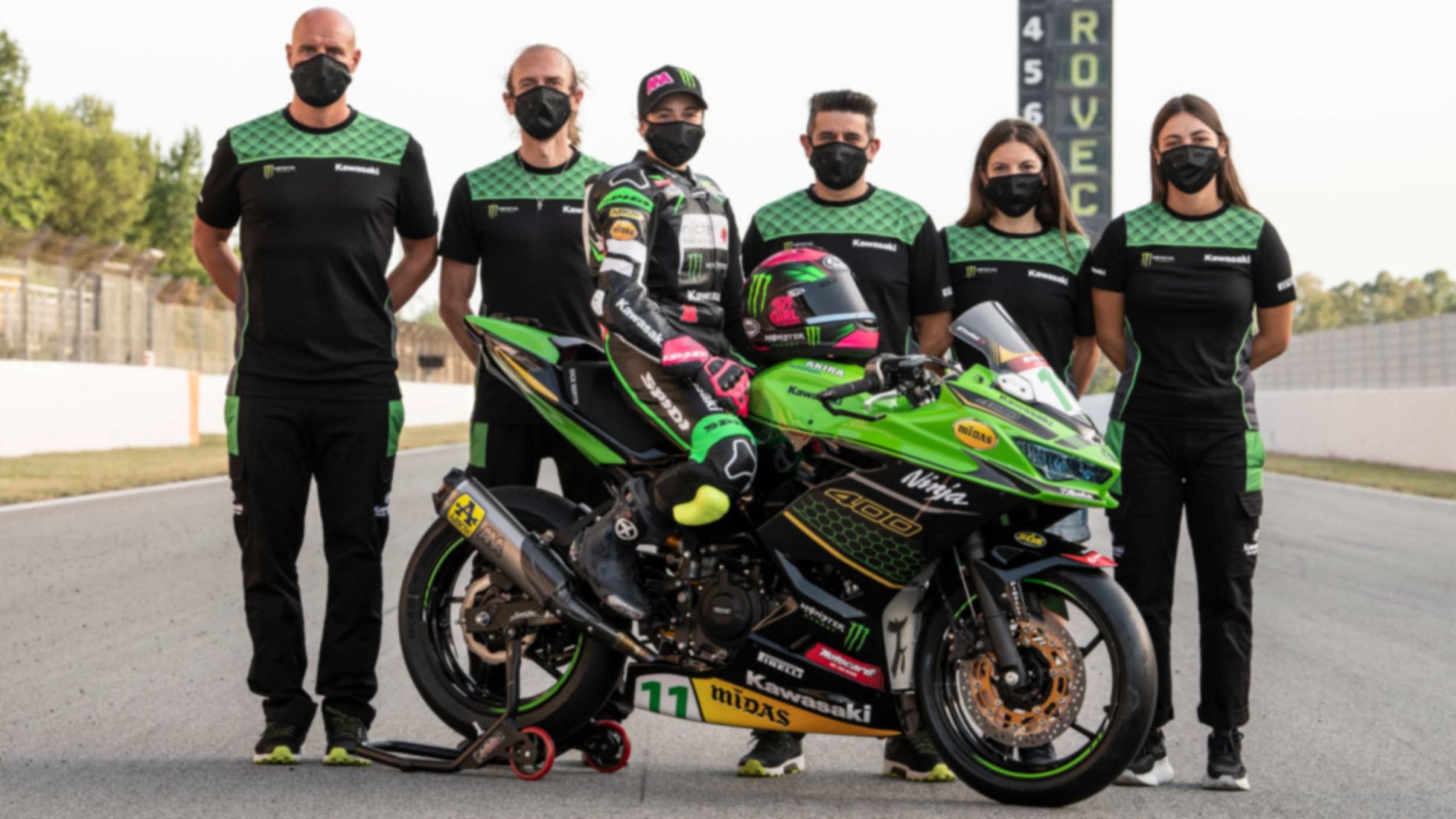 Ahead of the WorldSSP300 starting at Jerez, Kawasaki Provec WorldSSP300 and 2018 Champion Ana Carrasco launch their season

With the start of FIM Supersport 300 World Championship approaching, Kawasaki Provec WorldSSP300 launched their 2020 campaign alongside 2018 WorldSSP300 Champion Ana Carrasco. The team will be aiming to claim the title with Carrasco at the end of the 2020 season as the Murcian rider looks to become the first double WorldSSP300 Champion.

Carrasco will be the sole rider of the Kawasaki Provec team with all efforts focused on her performance onboard her Kawasaki Ninja 400 during 2020. With the long delay before WorldSSP300 starts, Carrasco’s focus has been on physical and off-road training until recently being able to get onboard her bike once again with test days at Circuit de Barcelona-Catalunya; with the bike prepared by the technicians from Provec.

Announced at the team launch was a documentary about Ana Carrasco to be shown on Rakuten when it is released and will focus on Carrasco’s career from the beginning, plus how she overcomes obstacles and barriers on her way to becoming World Champion. Around 80 minutes in length, the documentary will be released on 17th September and will be free to view.

2018 WorldSSP300 Champion Carrasco said: “It’s been a strange year for everyone, but it has allowed me to train hard and focus on my objective, but I’m really keen to start the season. I believe I am prepared! I’m very happy with all the team, with the work we’ve carried out during this time and I’m very excited and eager to put in a good season and so be able to pay back my team with good results for all the effort of these months giving me their best. I would also like to thank the sponsors who continue in the project for another year despite all the difficulties that this year presents and to those that have joined us for the trust placed in this project in spite of the current situation.”

Jordi Caparros (Kawasaki Provec WorldSSP300 – Team Manager) said: “I’m really pleased that at last the day has arrived to present the team, it’s not usual for this to happen in July, as well as doing so in the new Madrid Motocard store. I believe that Ana, in the longest pre-season of her life, has known how to maintain her physical form and the motivation so as to come to the first race at 100%, I see she’s very strong and really keen to get to Jerez to face this intense season. The team is also very motivated and already impatient to take our Kawasaki to the Jerez track and to see what happens in the first race of the season.”

The WorldSSP300 season starts at Circuito de Jerez – Angel Nieto with the Pirelli Spanish Round from July 31-August 2 with WorldSSP300 now featuring two races in a Round; providing an additional challenge for teams and riders. The first race will take place on Saturday afternoons, just hours after Superpole, with the second race on Sunday with full points awarded for both races.

You can follow the close, exciting action WorldSSP300 provides using the WorldSBK VideoPass!