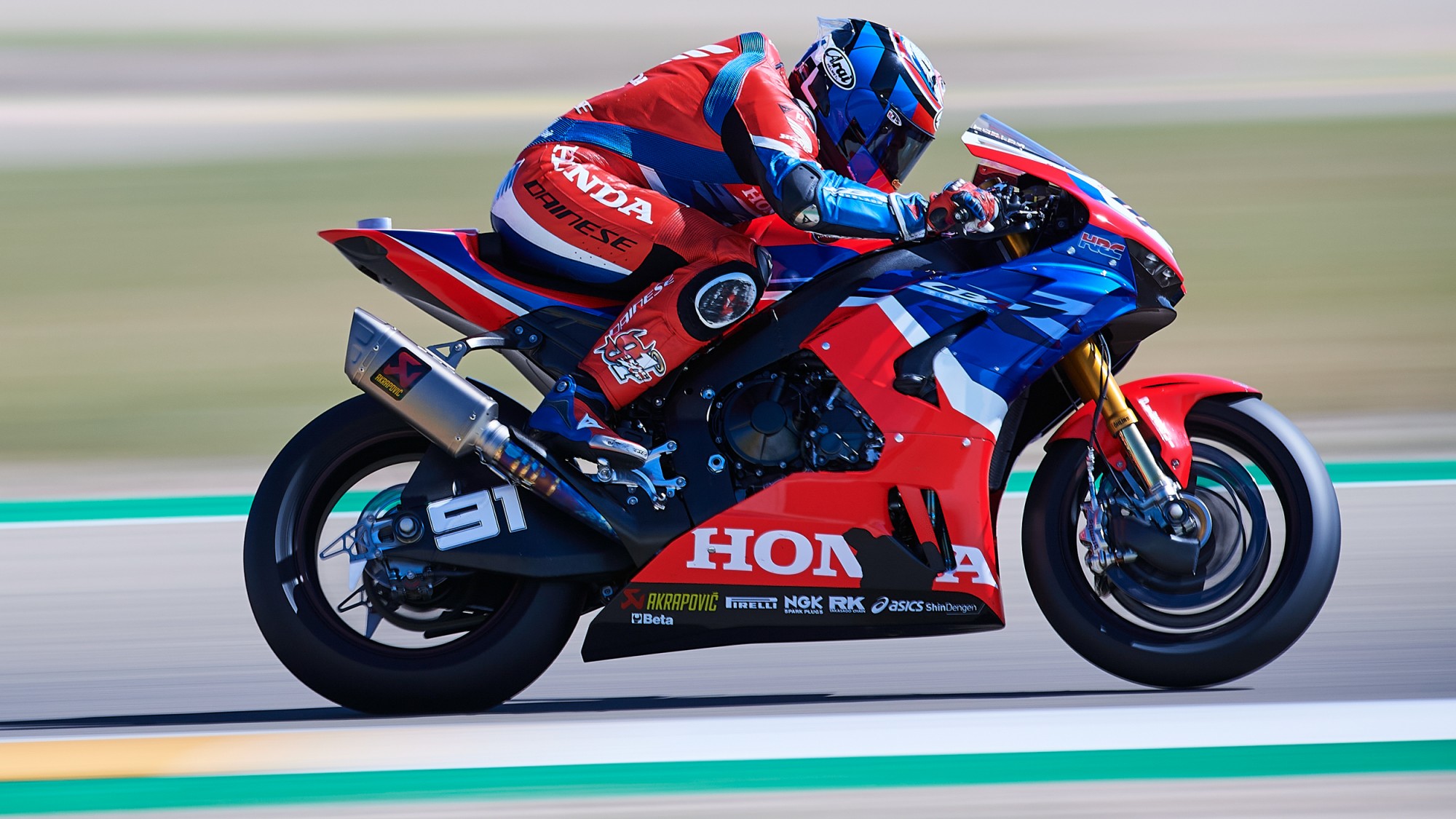 The ‘Pocket Rocket’ fended off his 2019 WorldSBK runner-up teammate, as Honda’s new WorldSBK project continues to go from strength to strength

The second day of testing at the MotorLand Aragon venue has been completed with Team HRC once again on top. In scorching heat and with track temperatures soaring into the 50s yet again, it was Leon Haslam who topped the test, shaving more than a second off of his lap time from yesterday. The WorldSBK class riders were once again joined by WorldSSP and WorldSSP300 teams, of which the Dynavolt Honda team joined in for the second day.

Team HRC were once again hard at work, methodically working their way through their testing programmes in order to better understand the new Honda CBR1000RR-R SP. Haslam set a 1’50.357 lap, more than one second quicker than his time from yesterday; this confirmed that progress is being made by the Japanese manufacturer. For teammate Alvaro Bautista, he was on top for much of the afternoon session and second overall, just over three tenths back of his teammate.

Completing the top three was Christophe Ponsson (Nuova M2 Racing) and his Aprilia, as they prepare for wildcards throughout the season. Their aim was to bag as much time on track as possible, with each lap showing that the bike and rider are getting more comfortable. Of the remaining WorldSBK riders, Sylvain Barrier (Brixx Performance) was in fourth place, continue his progress aboard the Ducati Panigale V4 R. Takumi Takahashi (MIE Racing Althea Honda Team) was in a strong fifth place as he too was getting back used to the bike, having missed the Misano and Catalunya tests.

In World Supersport, Jules Cluzel (GMT94 Yamaha) continued to be the man to beat as he and the French GMT94 squad continued their extensive testing schedule. The team have tested throughout France during the break and were also present during the Catalunya test. Hikari Okubo (Dynavolt Honda) was also in action and the Japanese star impressed aboard the CBR600RR, whilst teammate Patrick Hobelsberger was next up; the Dynavolt Honda team weren’t at Aragon for day one.

Frantic action in WorldSSP300 continued as Ukraine’s Nick Kalinin (Battley – RT Motorsports by SKM – Kawasaki) remained at the head of the pack with his day one time, despite being just second in day two’s afternoon session. Ana Carrasco (Kawasaki Provec WorldSSP300) was in the mix too, as she completed it all in second, and was less than a tenth from the top WorldSSP300 time in day two’s afternoon session. Unai Orradre (Yamaha MS Racing) topped day two with a time from the morning session but was third overall. A whole host of other teams were present at the test and set good lap times, although Carrasco was the one who set the most laps in the afternoon with 36.

Enjoy the return to racing action and build-up to the resumption of 2020 with the WorldSBK VideoPass!