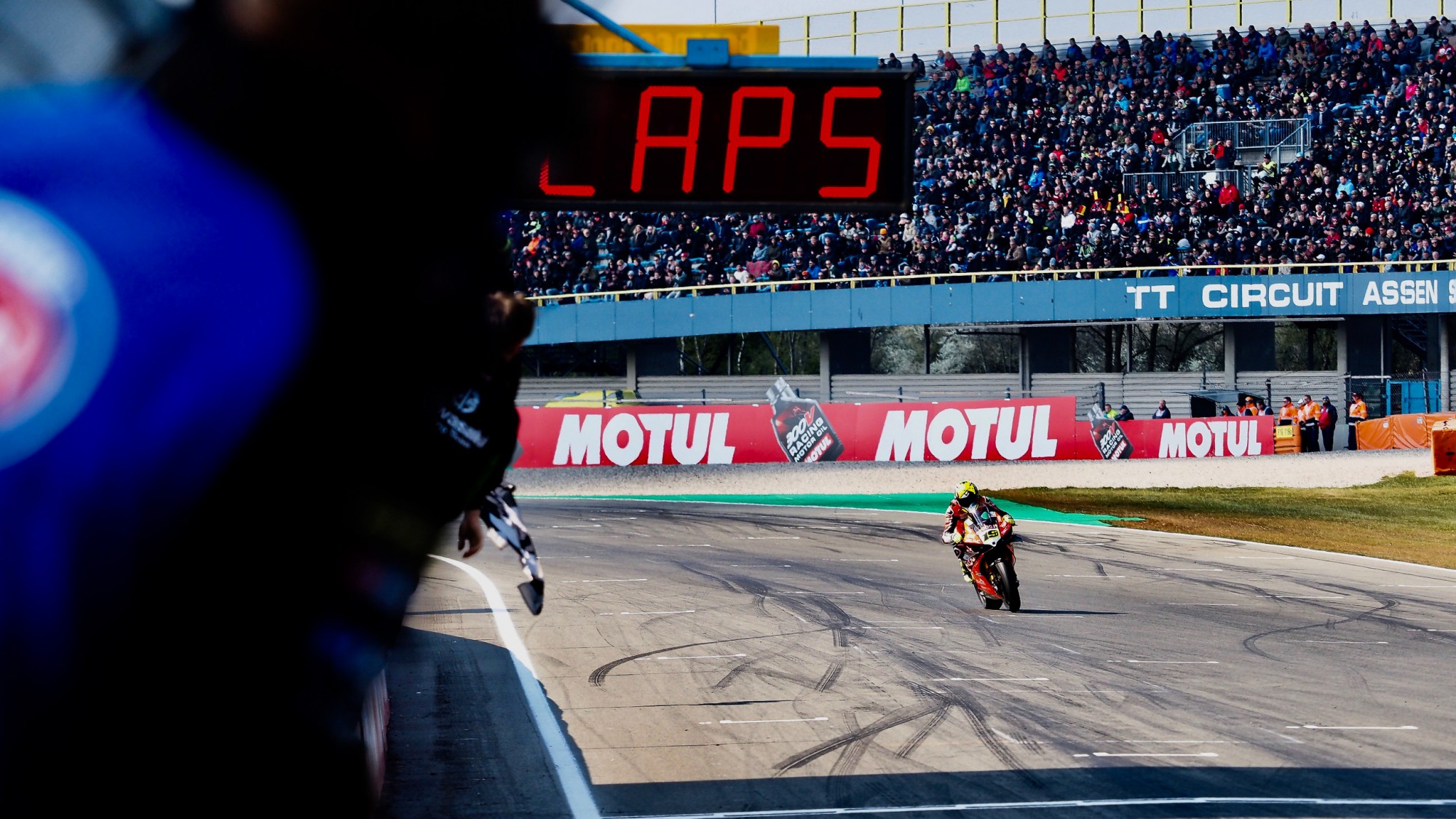 The Spanish rider became the first rider in WorldSBK history to win ten races at the start of the season!

Race 1 of the Motul Dutch Round at the TT Circuit Assen proved to be a thrilling encounter, as it got underway in bright sunshine at the legendary venue.

With the race firing into life, Alvaro Bautista took the advantage at Turn 1 and led the opening few laps of the race. It was a brilliant start by Markus Reiterberger (BMW Motorrad WorldSBK Team), who was up to second position, demoting Michael van der Mark (Pata Yamaha WorldSBK Team), whilst Leon Haslam (Kawasaki Racing Team WorldSBK) was fourth. Rocketing through on the first lap from eighth, Jonathan Rea (Kawasaki Racing WorldSBK) was fifth by the end of the lap one, before getting his teammate for fourth at Turn 1 at the start of lap two.

As the race settled down, Michael van der Mark began to drop back, unable to fight off a rampant Jonathan Rea. Soon, the Dutchman had Alex Lowes (Pata Yamaha WorldSBK Team) for company, whilst out front, Alvaro Bautista was beginning to stretch Reiterberger. Rea was starting to close but not enough to get on terms with Reiterberger straight away.

Chaz Davies (ARUBA.IT Racing – Ducati) was in a battle with Tom Sykes (BMW Motorrad WorldSBK Team), before starting to pull away in the middle of the race. Behind Sykes in the same battle were the leading Independent riders, consisting of Jordi Torres (Team Pedercini Racing) and Toprak Razgatlioglu (Turkish Puccetti Racing). The two riders swapped positions rather aggressively between Turns 1 and Turn 2. The Spaniard still able to stay ahead of the Turkish rider.

With five laps to go, ‘Pocket Rocket’ Leon Haslam had started to line up the rear end of Alex Lowes’ Yamaha, as the two continued to battle and fight. Despite trying to pull away, Haslam was able to remain with Lowes and eventually, with three laps to go, made the pass at the final chicane. However, a mistake by Haslam at Turn 7 allowed Lowes back ahead, making for a great last lap between the two.

However, at the front, it was business as usual for Alvaro Bautista, who made history to take the win at Assen and become the first rider to win the opening ten races of a WorldSBK season. Jonathan Rea finished second once again in another damage limitation ride, whereas it home-hero Michael van der Mark who completed the podium – his first of the season. Alex Lowes put in the ride of his life with a determined fourth position, ahead of WorldSBK returnee Leon Haslam.

A fine ride by Markus Reiterberger saw him take a stunning sixth position, whilst Chaz Davies was seventh, a further 1.8s behind the German revelation. It was a big battle on the final run to line between Jordi Torres and Toprak Razgatlioglu, with the Spaniard holding on for eighth position and Toprak in ninth. A dejected Tom Sykes could only manage tenth.

Outside of the top ten, Leon Camier (Moriwaki Althea Honda Team) was in eleventh, with Marco Melandri (GRT Yamaha WorldSBK) recovering to 12th ahead of his teammate Sandro Cortese. Eugene Laverty (Team Goeleven) couldn’t replicate his Aragon success and was 14th, whilst Ryuichi Kiyonari (Moriwaki Althea Honda Team) rounded out the points. Hector Barbera (Orelac Racing VerdNatura) was two laps down in 16th.

Bautista’s win makes it the first for Ducati at TT Circuit Assen since Sylvain Guintoli in 2012, Race 1. He is also the first rider ever in WorldSBK history to take ten victories in the opening ten races.

There were no crashers in the race, but Italians Alessandro Delbianco (Althea Mie Racing Team) and Michael Ruben Rinaldi (BARNI Racing Team) retired.

Watch the rest of a record-breaking WorldSBK 2019 season with WorldSBK VideoPass!