Galang Hendra Pratama (BIBLION YAMAHA MOTOXRACING) was phenomenal for a third day in a row at the Automotodrom Brno, flying away from pole at the start and securing his second race win in the FIM Supersport 300 World Championship, after winning at Jeréz last season. Walid Khan (Nutec- Benjan – Kawasaki) took his first WorldSSP300 podium in second with Borja Sánchez (ETG Racing) in third, in a race that ended early due to a red flag.

The Indonesian lost his pole lead momentarily to Ana Carrasco (DS Junior Team) at turn 1, but two bends later the 19-year-old was back out in front, quickly making space between himself and the near-40 riders behind. With Hendra Pratama running away at the front, the fight for second turned into a vintage WorldSSP300 scuffle to the line, with Carrasco defending her place from attacks by Scott Deroue (Motoport Kawasaki) and the surprising Maria Herrera (BCD Yamaha MS Racing), up from 17th on the grid.

A mistake by Carrasco put her at the back of a ten-rider strong group of riders, with several more incredibly close behind. And with the riders gearing up for a thrilling race finish, it was suddenly all over: a crash in the back group forced a red flag, and with 7 laps out of 10 having been completed (over two thirds of the full race distance) the race end was declared.

As things stood, Khan and Sánchez completed the podium, with Koen Meuffels (KTM Fortron Junior Team) in fourth, Glenn van Straalen (KTM Fortron Racing Team) in fifth and the returning Nick Kalinin (GP Project Team) in sixth. The red flag came at the worst moment possible for Carrasco, back in eleventh and out of the top-10 for the first time this year; she remains the championship leader, however, with Sánchez now second 20 points behind, and Luca Grunwald (Freudenberg KTM WorldSSP Team), tenth at Brno, falling to third one point below the ETG Racing rider.

Rewatch all the best moments from the Brno round, with the reactions from all the protagonists to come, thanks to the WorldSBK VideoPass. 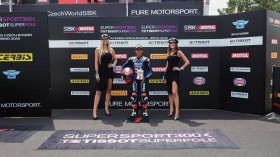