The KRT rider is looking forward to race day after scoring his 25th career pole.

Tom Sykes (Kawasaki Racing Team) secured his first pole position start of the 2015 season with a best lap of 1’34.789 during the second Tissot-Superpole sessin at Assen, heading of his own team-mate Jonathan Rea by 0.131 seconds. It was Sykes’ 25th career Superpole success and meant that Kawasaki riders have taken three of the four pole positions available in the season so far.

Sykes, already the third most successful WorldSBK rider in terms of career pole positions, moved to within one Superpole win of the second place rider in the record books, Troy Bayliss, with his fastest pre-race lap at Assen. Always a fan of the fast and flowing nature of the majority of the Assen circuit’s corners, Sykes pushed on in confident fashion with a qualifying tyre to earn the best starting place for Sunday’s two 21-lap races.

Tom Sykes: “We are definitely getting there now. It feels that this pole has been a long time coming but I am very happy. In Aragon we had a small indication that the Ninja ZX-10R and myself are starting to work as one package again. In the first two rounds the bike and myself were sometimes working in two different directions, but we are both working in the same direction now. I know we can still improve the Ninja underneath me but as long as we can keep working in this direction, I am happy. A lot of credit has to go to my crew chief Marcel and the boys in the garage. We have had the mechanics working hard and making a lot of changes. We have definitely got the speed and now I want that speed for 20 more laps here.” 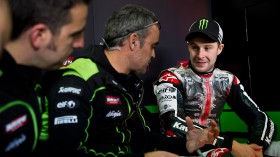 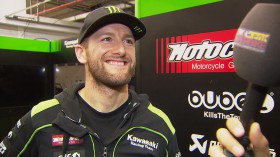