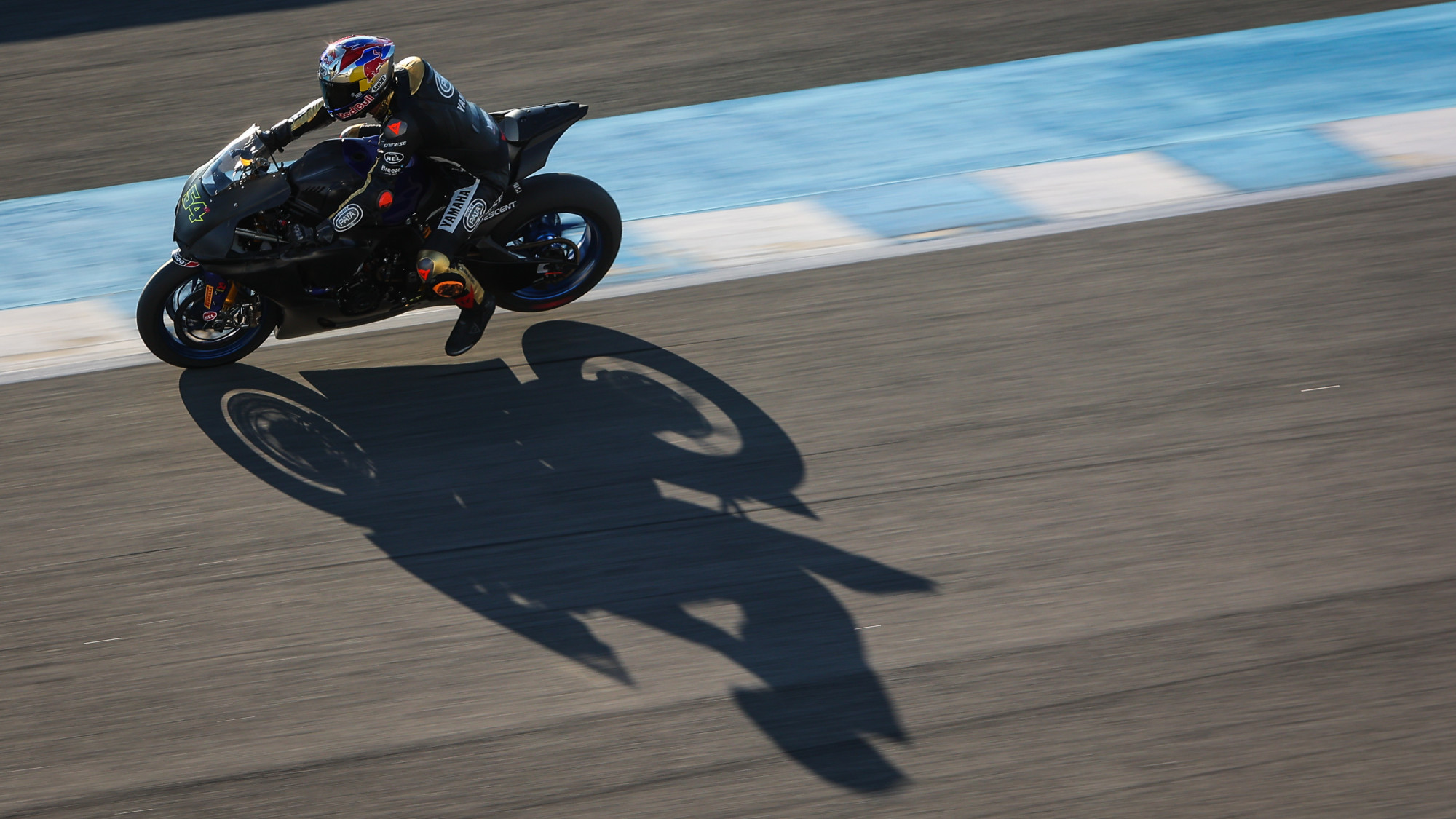 Day 1 during testing for the MOTUL FIM Superbike World Championship at the Circuito de Jerez – Angel Nieto was a dramatic affair as teams and riders got their first 2023 running under their belt. 2021 Champion Toprak Razgatlioglu (Pata Yamaha WorldSBK) topped the times ahead of reigning Champion Alvaro Bautista (Aruba.it Racing – Ducati) by two tenths of a second, with Bautista crashing in the afternoon, while rookie Danilo Petrucci (Barni Spark Racing Team) shone brightly on his WorldSBK debut.

TECH CHANGES AT THE FACTORY TEAMS: supplier changes and upgrades…

Toprak Razgatlioglu (Pata Yamaha WorldSBK) led the way during Day 1 as he posted a 1’38.597s and completed 60 laps. The 2021 Champion, running his traditional #54 plate, was focusing on the rear of his Yamaha YZF R1 machine to improve grip and acceleration while he also had a new swingarm on the 2023 machine. Andrea Locatelli, entering his third season with the team, had the same focus as his teammate as he looks to start 2023 strongly. Locatelli was 12th in the classification with a best time of 1’40.227s, after 79 laps.

Reigning Champion Alvaro Bautista (Aruba.it Racing – Ducati) had a crash at Turn 1 in the afternoon session while running his 2023 bike branded with the #1. He was able to ride his Panigale V4 R back to the pits following the crash. Bautista completed 88 laps, as he was one of the first riders to hit the track, with a best time of 1’38.851s. Teammate Michael Ruben Rinaldi, who was focusing on getting a good feeling with his bike, was almost four tenths down on his teammate but only a place behind after Rinaldi completed 72 laps; both riders had the 2022 and 2023 bikes available.

Six-time Champion Jonathan Rea (Kawasaki Racing Team WorldSBK) started his test in the afternoon, opting to not go out on track in the colder conditions in the morning, but immediately showed his pace. He took fourth place overall, completing 42 laps, with a best time of 1’39.302s. Teammate Lowes, who had some performance, chassis and suspension components including a modified rear shock to try, was three tenths and one place behind Rea with 37 laps to his name. Kawasaki also introduced a new system on their ZX-10RR which will prevent riders hitting a false neutral, something which occurred on a couple of occasions throughout 2022.

Team HRC duo Xavi Vierge and Iker Lecuona had a new fairing to test on Day 1 at Jerez as they embark on their second season with the factory Honda outfit. In view of several engineers from Japan, the pair took seventh and eighth respectively. Honda, testing new components including new brake callipers from supplier Nissin on their CBR1000RR-R, had times of 1’39.879s from Vierge with Lecuona only 0.004s behind.

At the BMW box, both Scott Redding (ROKiT BMW Motorrad WorldSBK Team) and teammate Michael van der Mark adjusted to new brakes after the German manufacturer switched to Nissin from Brembo. Van der Mark’s plan was to complete as many laps as possible on his first day riding the back since the Australian Round, which he did with 65 laps, while Redding completed 67. Redding was the faster of the two riders as he posted a 1’39.998s, while van der Mark was seven tenths slower.

ROOKIES UP TO SPEED: Petrucci in the top six, Aegerter and Gardner closely matched

Three rookies were taking part in the Jerez test as they got adjusted to new surroundings, teams and bikes. Danilo Petrucci (Barni Spark Racing Team) took sixth spot at the end of the day with a 1’39.790s, just over a second slower than Razgatlioglu. Dominique Aegerter (GYTR GRT Yamaha WorldSBK) was ninth fastest on his first day in dry conditions with the Yamaha R1, lapping in 1’39.934, as he worked on linkage, swingarm and electronic components, with teammate Remy Gardner close behind in 14th place and six tenths back from Aegerter. Baldassarri (GMT94 Yamaha), learning the Championship and bike along with his team, was the lowest-placed rookie with 19th place as he took to the Yamaha R1 for the first time. He completed 67 laps during Day 1.

German rider Philipp Oettl (Team GoEleven) was 13th  on the first day of the test as he used the 2022 Panigale V4 R, possibly using the 2023 bike tomorrow, as he goes in search of his first WorldSBK podium in 2023. He posted a best time of 1’40.234s after completing 67 laps on Wednesday at Jerez. With the 2023 BMW M 1000 RR at his disposal, Garrett Gerloff (Bonovo Action BMW) finished the day in 11th place with a best time of 1’40.065s and completing 54 laps. Gerloff was ahead of both teammate Loris Baz and factory team rider van der Mark in the classification, with Baz taking 17th place after completing 60 laps. The returning Tom Sykes (Kawasaki Puccetti Racing) was in 16th place at the end of the day, although he wasn’t testing anything new compared to the December test. Sykes also had a small mechanical issue with around 90 minutes remaining in the session as he went to leave the pits but was able to head out on track, with the same bike, around 10 minutes later.

Oliver Konig (Orelac Racing VerdNatura) was 18th in the WorldSBK field as he starts his second campaign with the Independent Kawasaki squad. Konig was able to test some brake updates on his ZX-10RR but the main goal for him was for his new team around him to adjust; the team have brought in some Czech team member that Konig knows while there has also been a change of crew chief.

THREE-WAY FIGHT: Bulega vs Oncu vs Caricasulo for WorldSSP honours

In WorldSSP, it was Ducati who came out on top on Day 1 as Nicolo Bulega (Aruba WorldSSP Racing Team) topped the times in a three-way battle. Can Oncu (Kawasaki Puccetti Racing), who has four bikes to test at Jerez including the 2022 bike and the 2023 specification, was second while Federico Caricasulo (Althea Racing) was third. Rookie Andrea Mantovani (Evan Bros. WorldSSP Yamaha Team) took fourth place, ahead of Adrian Huertas (MTM Kawasaki) and WorldSSP rookie John McPhee (Vince64 by Puccetti Racing). Yuta Okaya (Prodina Kawasaki Racing WorldSSP) and Raffaele De Rosa (Orelac Racing VerdNatura) were also at the test, although neither were recording lap times during the test.

Follow all the action from WorldSBK in 2023 using the WorldSBK VideoPass! 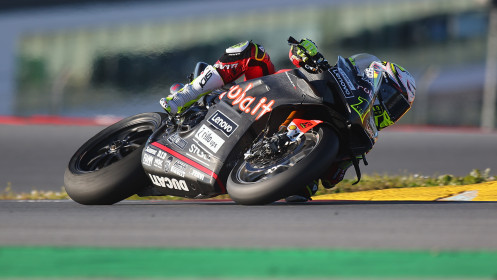 Reigning Champion Alvaro Bautista was fastest on Day 2 at Portimao despite a crash, with Jonathan Rea and Toprak Razgatlioglu also under the lap record 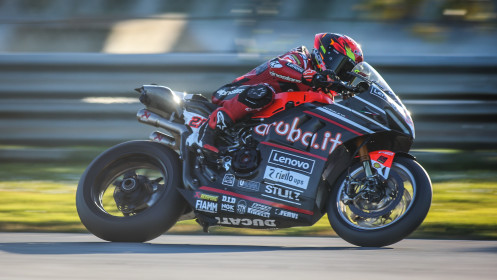 The Italian left it late to top the times in Portugal, with the top three separated by very little at the end of Day 1 at Portimao 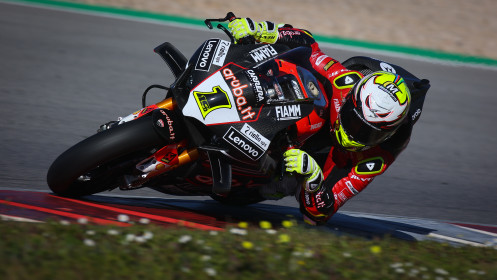 The reigning Champion put in the fastest time of the morning test to top the timesheets, while Alex Lowes and Xavi Vierge brought out the red flags