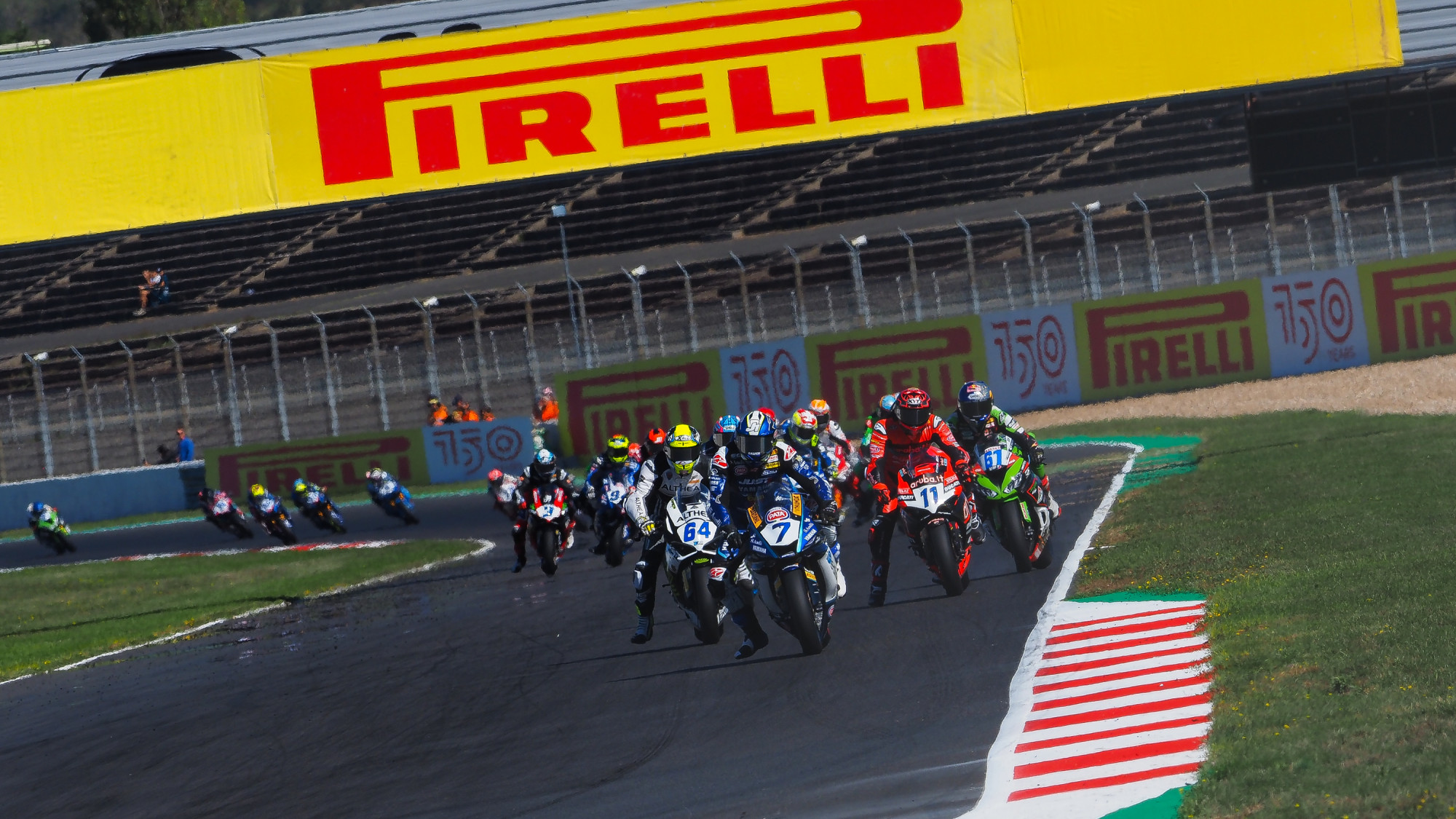 After the drama of the Pirelli French Round, the FIM Supersport World Championship returns to action at the Circuit de Barcelona-Catalunya for the 2022 Catalunya Round, with a title fight well and truly on. The top two in the Championship head to Barcelona just 19 points apart and on a bit of a level playing field through their experience of WorldSSP at the circuit. Who will leave Spain on top of the standings, or will – as has been the case in the previous two years – a surprise be sprung?

AEGERTER VS BALDASSARRI: more drama to be expected

After their incredible last-lap fight at Magny-Cours, Championship leader Dominique Aegerter (Ten Kate Racing Yamaha) and Lorenzo Baldassarri (Evan Bros. WorldSSP Yamaha Team) are separated by just 19 points in the standings. The Catalunya Round could also be a bit of a level playing field for the pair, with both having plenty of experience of the circuit but not in WorldSSP races. Aegerter missed last year’s Catalunya Round due to his MotoE™ commitments while Baldassarri is in his rookie campaign. Aegerter took a best result of seventh in Moto2™ in Barcelona and he also claimed a podium in MotoE™, while Baldassarri’s best was fourth in Moto2™. Both have tested at the track but with the lack of racing knowledge, could they have company in their title fight?

HOPING TO CLOSE THE GAP: will Oncu close up on Bulega?

Nicolo Bulega (Aruba.it Racing WorldSSP Team) is almost 100 points back from Baldassarri and lying in third place in the standings but may find himself fending off a challenge from Turkish star Can Oncu (Kawasaki Puccetti Racing) in the second half of 2022. Oncu has a mixed record at Catalunya, taking fourth in Race 1 in 2021 and 12th in Race 1 in 2020, but retiring from Race 2 in both years. Bulega will make his maiden WorldSSP appearance at the circuit but raced it three times in Moto2™, with a best of 13th, and three times in Moto3™ when he claimed a best of fifth place. The pair will also need to keep an eye on Stefano Manzi (Dynavolt Triumph), who is only 18 points behind Oncu in the standings. Like Bulega, he has no experience of Catalunya in WorldSSP but does from Moto2™: he raced here six times but failed to score a point, retiring on four occasions. Of the top five, only Oncu has raced there before – a first win in the offing perhaps?

THE BATTLE FOR SIXTH: Huertas looking to make gains

Dutch rider Glenn van Straalen (EAB Racing Team) is sixth in the standings on 95 points and is currently in a fierce battle with Yari Montella (Kawasaki Puccetti Racing), with the Italian rider three points back. Van Straalen enters the Catalunya Round on the back of a mixed French Round, claiming second place in Race 1 but retiring from Race 2. Montella is still chasing a first WorldSSP podium but has shown good form of late and is consistently in the battle, including with teammate Oncu.

The three riders rounding out the top ten are separated by just eight points with five rounds and ten races remaining and all in with a shout of the top six overall. Rookie Adrian Huertas (MTM Kawasaki) is eighth in the standings on 79 points after an impressive maiden WorldSSP campaign, with the Spanish rider leading Federico Caricasulo (Althea Racing) and Niki Tuuli (MV Agusta Reparto Corse). Huertas completed four races in Barcelona in WorldSSP300 with a best result of fourth, whilst Caricasulo raced in WorldSSP and WorldSBK at the Circuit de Barcelona-Catalunya; taking a best result of sixth in WorldSSP in 2021. Tuuli is one of a handful of riders to take a podium in Barcelona after he took third in Race 2; less than a tenth away from winning. Of the group, Caricasulo arguably has the most potential, having led races at Magny-Cours and looking the strongest before a mechanical issue took him out of Race 1 and a mistake out of victory contention in Race 2.

Two Spanish wildcards will take to the circuit in Barcelona for the Catalunya Round. Aleix Viu (Andotrans Team Torrento) and Julian Giral (Valvulas Arco JG76 Team) will join the 30-strong field. Between rounds, VFT Racing and Kyle Smith parted ways with each other, whilst Isaac Vinales (D34G Racing) and Simon Jespersen (Kallio Racing) will continue in their role as replacement riders. Bahattin Sofuoglu (MV Agusta Reparto Corse) and Marcel Brenner (VFT Racing) will need to undergo medical checks before taking part in the Catalunya Round, after injuries sustained at Magny-Cours.

Watch the 2022 Catalunya Round in style using the WorldSBK VideoPass!