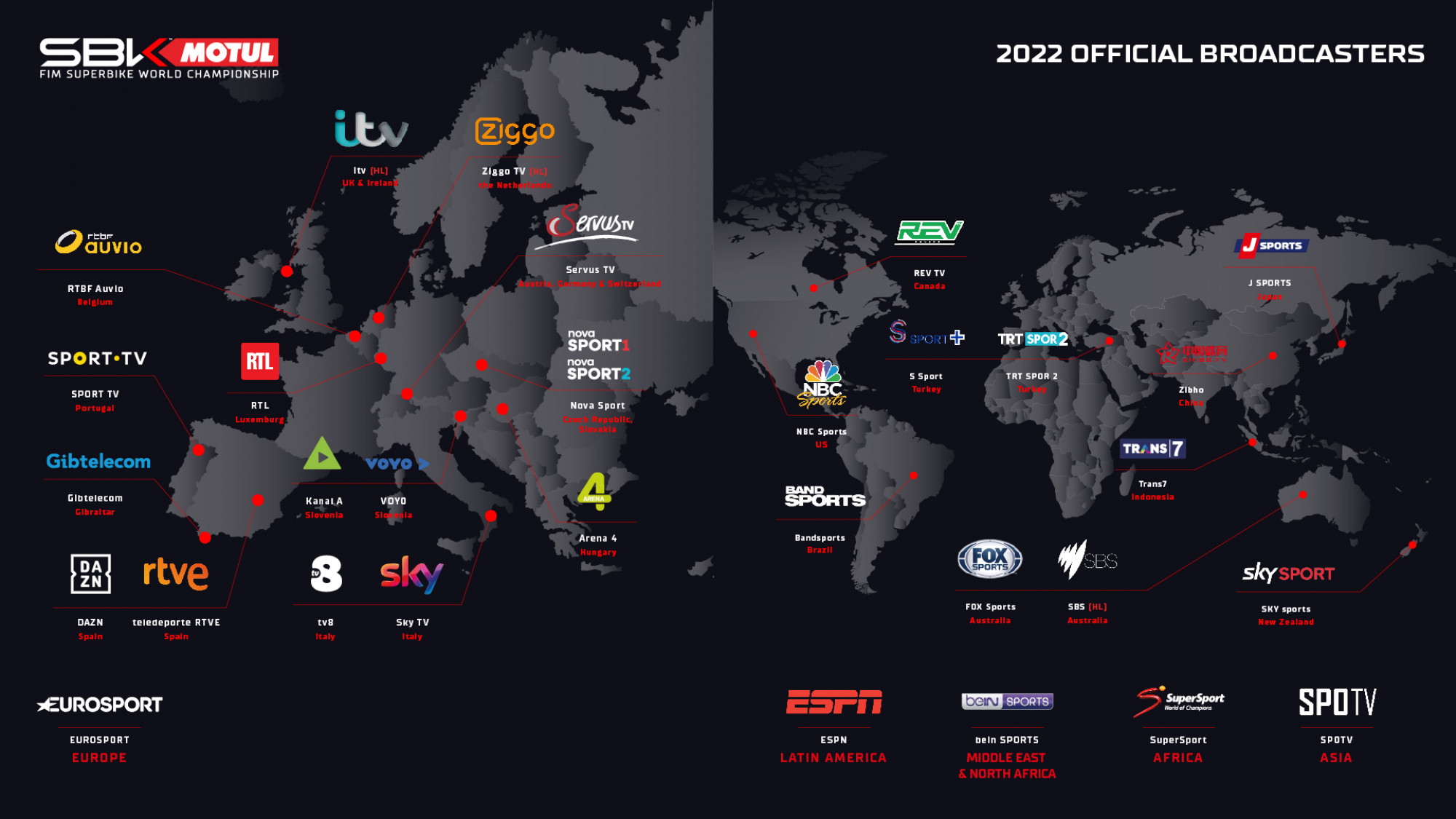 Dorna WSBK Organization (DWO) is thrilled to announce that the TV coverage for the MOTUL FIM Superbike World Championship will reach new audiences and new territories for the 2022 season. New broadcasters have agreed to air the fastest production-derived motorcycle World Championship, whilst crucial partnerships have also been extended, giving fans the ultimate WorldSBK TV experience.

Eurosport remains one of the key broadcasters as it shows WorldSBK around Europe, ensuring fans from 54 countries (of which 31 are exclusive to Eurosport) are able to watch the exciting Championship battle unfold. Eurosport UK will also cover every Round with their own personalised content for viewers in the UK and Ireland as Jonathan Rea (Kawasaki Racing Team WorldSBK) goes in search of reclaiming the World Championship. Fans can also enjoy the comprehensive 46-minute highlights package for free on ITV in the UK, with the British broadcaster extending their agreement until 2023.

Sky Sport in Italy will broadcast live coverage of all three classes in the 2022 season with an extension until 2025 also being reached, providing in-depth coverage, highlights and news from across the season. This means Italian fans can follow the Aruba.it Racing – Ducati title charge with the return of Alvaro Bautista and the second season of Michael Ruben Rinaldi. Fans can also watch Ducati’s return to WorldSSP and rookies such as Nicolo Bulega (Aruba.it Racing – Ducati) and Lorenzo Baldassarri (Evan Bros. WorldSSP Yamaha Team).

In Spain, fans will continue to enjoy the action through the national Spanish television network, RTVE, and their dedicated sports channel Teledeporte, as well as DAZN. There’s plenty of reason for Spanish fans to enjoy the action in 2022 with two rounds coming from within the country: the season-opening round at MotorLand Aragon and the return of the Circuit de Barcelona-Catalunya circuit in September. Alvaro Bautista goes for an elusive first title back aboard the Ducati Panigale V4 R, whilst Team HRC field an all-Spanish, all-rookie line-up of Iker Lecuona and Xavi Vierge. Portuguese fans do not miss out either with broadcasts on Sport TV, as WorldSBK heads not once but twice to Portugal in 2022 with Estoril in May and Portimao in October, whilst viewers in Gibraltar can watch on GIB Telecom.

German fans will be able to follow all of the action from Scott Redding (BMW Motorrad WorldSBK Team), with him on German machinery on ServusTV and their online platform, servustv.com/sport and also Philipp Oettl’s (Team Goeleven) debut season, as they’ll broadcast WorldSBK, WorldSSP and WorldSSP300 in Germany, Austria and Switzerland. This also means fans can watch Dominique Aegerter (Ten Kate Racing Yamaha) go for a second Championship in WorldSSP. Scott Redding’s teammate, Michael van der Mark, will have a new home in The Netherlands on Ziggo Sport, where fans can watch the 46-minute highlights show.

One of the main additions in Europe this season is WorldSBK growth in Turkey, the home of current World Champion Toprak Razgatlioglu (Pata Yamaha with Brixx WorldSBK). SSport join the broadcasters list in the nation, alongside TRT Sport (Turkish National Television Network), and will show all sessions from all classes. This means that, more than ever before, Toprak Razgatliolgu’s fans will be able to follow the action.

After 2021’s returning Czech Round, Nova Sport and VOYO will continue to broadcast all three classes in the Czech Republic and Slovakia, with Kanal A available in Slovenia for the same duration. In Hungary, Arena4 continue to showcase the fastest production-based motorcycle world Championship. RTL continue showing the action in Luxembourg and RTBF Auvio in Belgium, with Loris Cresson (TPR Team Pedercini Racing) in his second WorldSBK season.

After Indonesia returned to the WorldSBK calendar in 2021 at the Pertamina Mandalika International Street Circuit, fans can enjoy the action on Trans7, with the Indonesian Round ready and waiting this November. SpoTV will be the new home of WorldSBK in the Republic of Korea, Brunei, Cambodia, East Timor, Hong Kong, Indonesia, Laos, Macau, Malaysia, Mongolia, Myanmar, the Philippines, Singapore, Taiwan, Thailand and Vietnam, with a tailor-made broadcast for the Indonesian Round. J-Sport will also broadcast the action in Japan until 2024, with a new deal reached, meaning fans can watch their favourite manufacturers, Kohta Nozane (GRT GYTR Yamaha WorldSBK Team) in WorldSBK and Yuta Okaya (MTM Kawasaki) all season. Eurosport will also broadcast in various Central Asian countries, with Kazakhstan, Kyrgyzstan, Tajikistan, Turkmenistan and Uzbekistan all enjoying coverage.

There’s no change to the North America broadcasting deals, with WorldSBK remaining on the NBC Sports Network for 2022 so fans can follow all the action from Garrett Gerloff (GRT GYTR Yamaha WorldSBK Team). REV TV continue broadcasting WorldSBK races as well as the 46-minute highlights package produced after each Round in Canada. In Latin America, there’s a major change as ESPN will be enhancing the WorldSBK experience in all LATAM countries excluding Mexico and Brazil, meaning the 2022 Argentinean Round can be enjoyed with ESPN too. With regards to Brazil, there’s also a change as WorldSBK will be on Bandsports TV, the home of motorsport in Brazil, as they show F1, Nascar and MXGP plus more.

Fans in the Middle East and North Africa (MENA) can enjoy 2022 on beIN Sports, after a successful 2021 saw new audiences in the region reached. Eurosport will also broadcast the action exclusively live in Lebanon and Israel. Supersport will continue their pan-Africa coverage throughout 2022 and until the end of 2024.

In Oceania, Fox Sports continues to broadcast the action in Australia with highlights likewise remaining on SBS. The 2022 season will see the return of the Australian Round at Phillip Island after two years away and fans can enjoy the return of the Bayliss name too, with Oli Bayliss (Barni Spark Racing Team) in World Supersport this year, as well as fellow rookie Australian Ben Currie (Motozoo by Puccetti Racing).  while Sky Sport will show the 2022 campaign in New Zealand, with a new contract in place until 2024.

Fans from all across the globe will be able to watch every single moment of action in 2022 using the WorldSBK VideoPass, giving viewers live and uninterrupted coverage of every session of every class as well as a huge archive of historical action. Thanks to Tissot, Live Timing is available on the WorldSBK App which you can download for free!