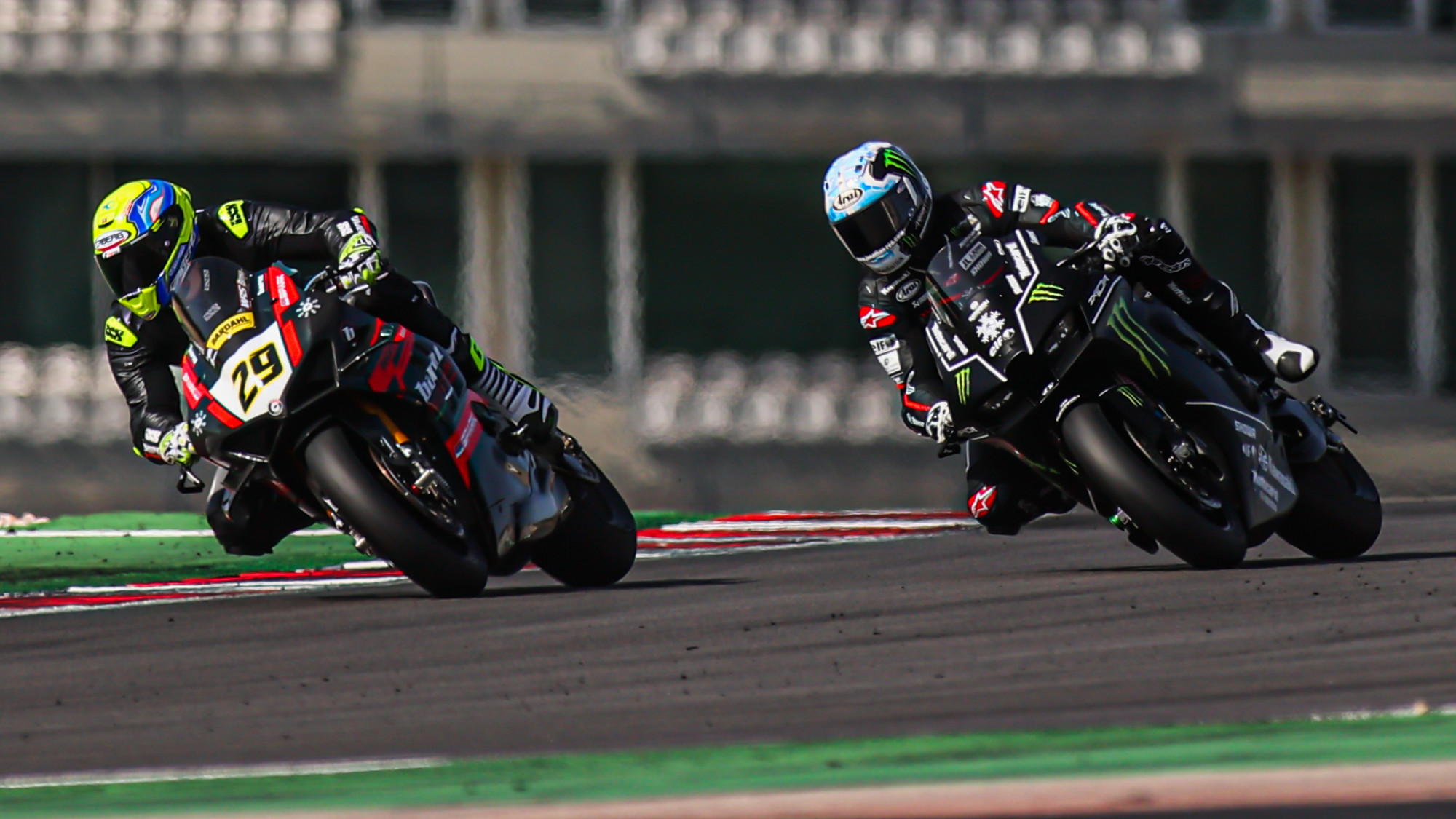 From old foes to new parts and lap records being shattered, it’s been quite the testing schedule and there’s still more to come

With the 2022 MOTUL FIM Superbike World Championship close to firing up, it’s time for a brief recap of what we’ve learnt in testing so far. Plenty of teams have taken to the circuit in order to do vital homework ahead of the Championship season starting, and whether it’s tech, pace, promise or surprises, there’s lots of takeaways for us to get stuck into. So, what have we learnt in testing so far?

RAZGATLIOGLU AND REA: “the first fighting has started”

The most recent test took place at Portimao, giving us the first look of reigning Champion Toprak Razgatlioglu (Pata Yamaha with Brixx WorldSBK) in 2022. It was like he’d never been away, as he took it to arch-rival Jonathan Rea (Kawasaki Racing Team WorldSBK). Both were following each other at the end of day two, with Toprak seemingly ‘ending’ Jonathan Rea’s race run at the end of the day. Both had very little to split them on both days, with Rea leading after their first duel before both were under the lap record come the final day. If last year, and now testing, are anything to go by, we may well be in for another stunning season which surpasses the previous one.

There’s been an array of tech updates right across the board so far. Starting with Yamaha, they were trialling a new fuel tank, which Toprak seemingly liked, whilst more parts will be on the way. At Ducati, they too had a new fuel tank, something a bit smaller so that both Alvaro Bautista (Aruba.it Racing – Ducati) and teammate Michael Ruben Rinaldi – both of whom are relatively small riders – could have more freedom on the bike and get it turned easier. Both also tested a new swingarm, which wasn’t entirely new as it was used in the 2021 preseason test in Barcelona.

Back at Jerez, we saw Honda with Showa suspension instead of Öhlins, putting them in line with Kawasaki, whilst Team HRC also switched to Nissin brakes from Brembo, putting them with BMW. There was also a noticeable change on the headstock of the bike, with it being further forward than last year’s more central position. We also saw the Kawasaki Puccetti Racing team back on track, with Lucas Mahias switching from Showa suspension to Öhlins. Back at Jerez in December, BMW confirmed a new engine specification and chassis modifications, although we are yet to see this in a public test.

BAUTISTA’S DUCATI RETURN IS PROMISING: is this his year?

Hitting the ground running almost immediately after the Indonesian Round of 2021, ‘Baucati’ was back and it looked like he had come home. Testing in public for the first time at Portimao, Bautista was right on the money and was just 0.132s behind on day one, before improving his time on the second day by seven tenths of a second despite a dramatic crash at Turn 8. Finishing four tenths off Toprak’s time and on the brink of going into the 1’39s, Bautista may well be warming up to something quite special as he gets back in red.

2022 could well be one of the fastest seasons yet in terms of track lap records, with Toprak Razgatlioglu, Jonathan Rea and Alvaro Bautista cracking the existing official lap records. For Razgatlioglu and Rea, they were in the 1’39s, achieving it with the all-new SCQ tyre before Toprak went even faster with the SCX 0557. The SCQ tyre is designed to do one lap but is also meant to be for the ten laps of the Tissot Superpole Race and had two variants at Portimao, after feedback from the Jerez test. The one variant that seems more likely is the one that is faster than the current SCX and lasts longer than the other variant tested, which is considered too close to the current Q tyre. In terms of the tyres characteristics, Giorgio Barbier confirmed that nothing had changed: “The casing will remain the same, it’s the same carcass profile and the same size. Just the compounds will change.”

WHAT WE STILL NEED ANSWERS TO: HRC and BMW keeping quiet

As has been the case in previous seasons, Team HRC are keeping their cards close to their chest, but team manager Leon Camier has expressed his pleasure at working with the team’s new riders, Iker Lecuona and Xavi Vierge. Whilst it’s not clear exactly what shape the team will be in compared to their competitors, rookies Lecuona and Vierge will be continuing their adaptation and hope to be near the front come round one. With BMW, they’re yet to do any testing in 2022 but riders Scott Redding (BMW Motorrad WorldSBK Team) and teammate Michael van der Mark will be joined by Loris Baz (Bonovo action BMW Racing Team) and his teammate Eugene Laverty at the Misano World Circuit “Marco Simoncelli” in March.