The Dutchman claimed his first podium in WorldSSP on home soil, having narrowly been denied a famous maiden victory

After a promising start to his 2022 FIM Supersport World Championship campaign with a fourth and a fifth at MotorLand Aragon, Dutch rider (Glenn van Straalen) claimed his maiden podium in front of his home fans in Race 1 of the Motul Dutch Round at the TT Circuit Assen. While second marks his best WorldSSP result to date, van Straalen was overtaken on the last lap of the shortened race and was denied an incredible home victory by just 0.081s from when the results were taken following a red flag.

The Dutchman would go on to lead eight laps of the race, which was ended at the end of Lap 13 when the red flags were deployed for a crash involving Tom Booth-Amos (Fusport – RT Motorsports by SKM – Kawasaki) and Marcel Brenner (VFT Racing). However, van Straalen was overtaken by Dominique Aegerter (Ten Kate Racing Yamaha) just before the red flags were thrown. With results taken from the last timing point completed by the riders, Aegerter claimed victory by just 0.081s ahead of van Straalen.

Reacting to his Race 1 podium, van Straalen said: “It was tight. We led the race with the two of us. It’s really nice to lead the race in your home track. It feels good, we had a good base. My start was a bit bad, so I needed to come from further back, but I made it through the field, and then it was the three of us. Aegerter followed me. It’s been amazing to stand in second place!”

Sunday’s action for van Straalen proved to be more challenging as he suffered a highside crash in Warm Up at Turn 10, and he was taken to the medical centre after for a check-up but was declared fit. In Race 2, at the start of the race van Straalen was involved in a crash with French rider Jules Cluzel (GMT94 Yamaha) at Turn 1 which put both riders out of the race. A weekend of highs and lows for van Straalen, but he will take great confidence from the fact he has fought for the podium in the first two rounds of the 2022 season having missed out in Aragon Race 2 at the final corner.

Don’t miss any of the tbrilling WorldSSP action from 2022 using the WorldSBK VideoPass! 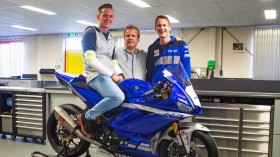 The all-Dutch team announce their 2020 WorldSSP300 line-up, but a “big surprise” is still yet to come with what else they’re planning!