Malaysia will be represented on the MOTUL FIM Superbike World Championship grid for the first time since the 1990s as Hafizh Syahrin joins the MIE Racing Honda Team for the 2022 campaign. Ahead of his rookie season in WorldSBK, Syahrin discussed his goals for the upcoming season as well as what it means to be the only Malaysian rider on the grid and inside the WorldSBK paddock.

The 27-year-old moves into WorldSBK after competing in the MotoGP™ paddock since 2011, mostly in Moto2™ but also having been in MotoGP™ in 2018 and 2019. The Malaysian rider brings plenty of experience with him to the MIE Racing Honda Team with the team expanding to two bikes for the 2022 season; Syahrin will race alongside Argentinean rider Leandro Mercado.

“First of all, I haven’t tried the bike yet, but I believe from the middle of last season the bike is getting better,” said Syahrin when discussing his goals for this season. “It improved race by race. I want to finish in the top ten in every race and try to give some challenge to everybody. I know some rivals from a few years, especially like Locatelli, Alvaro Bautista and some others who raced in the MotoGP™ paddock and then moved to WorldSBK. And new rivals, for sure I want to learn from Toprak especially as he’s young and very fast, and a legend rider in WorldSBK, Jonathan Rea. It’s a big challenge for me but I’ll try to give everything I have. My experience from MotoGP™, I’ll try to use it in WorldSBK.”

Discussing what it means for him to represent Malaysia on the world stage, Syahrin said: “It’s very exciting. There’s not pressure but I’m the only one like two years ago when I raced in MotoGP™ as the first Malaysian rider. I will try to do my best. I know my rivals, like the other rookies, have already done a few tests. I’m the only one, I think, who lacks a bit of testing because we know the team is preparing the bike. Last year, it was only one bike, so they’re preparing two bikes now.” 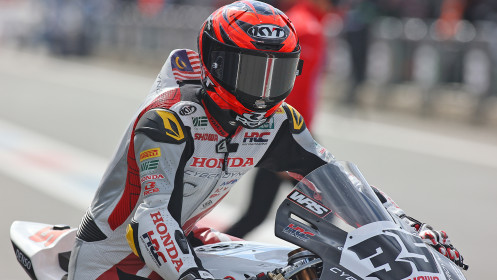