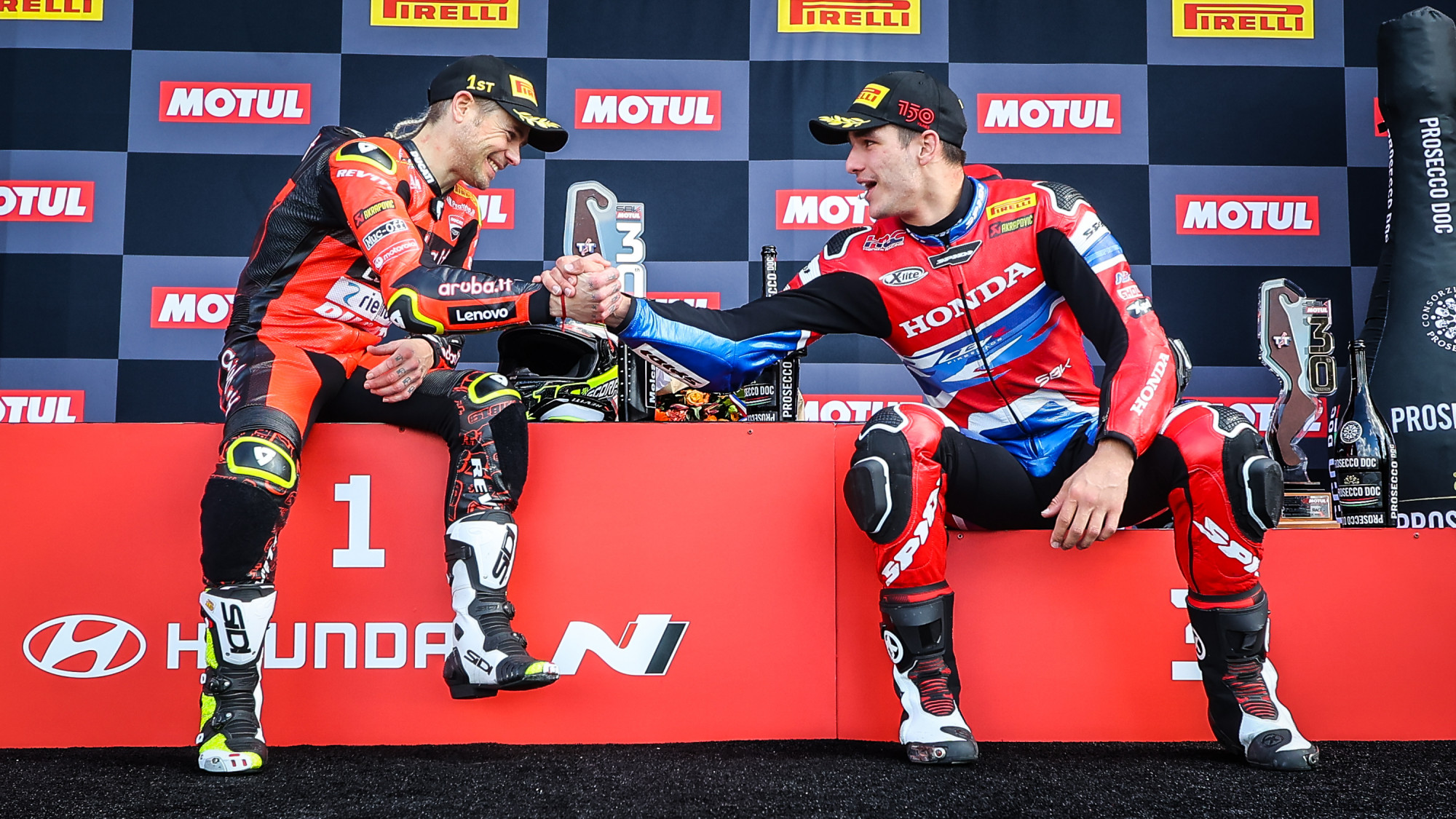 The 2022 MOTUL FIM Superbike World Championship burst wide open at the TT Circuit Assen in the Netherlands as a whole host of stories emerged. However, there were also huge statistical milestones amongst all the drama and excitement, with long waits ended whilst fresh faces shined. Take a look at it all below, to get your fix of fast facts in intriguing trivia.

1681/37 – 1681 days between the last time a WorldSBK race had five manufacturers inside the top five and Race 2 at Assen, where it happened again. It’s the 37th time in WorldSBK history that five different manufacturers completed the top five in a race – Alvaro Bautista won for Ducati ahead of Andrea Locatelli on a Yamaha, Iker Lecuona on a Honda, Alex Lowes on a Kawasaki and Scott Redding on a BMW at Assen this year. The last time five manufacturers were in the first five places was at Portimao’s Race 2 in 2017: Rea winning on a Kawasaki ahead of Michael van der Mark on a Yamaha, Marco Melandri on a Ducati, Eugene Laverty on an Aprilia and Jordi Torres on a BMW.

340 – Iker Lecuona’s (Team HRC) first podium of his WorldSBK career means that Honda have been represented on 340 WorldSBK podiums.

340 – Also on 340, the tally for WorldSBK having three different manufacturers on the podium following Bautista’s win, Andrea Locatelli (Pata Yamaha with Brixx WorldSBK) in second and Iker Lecuona (Team HRC) in third.

300 – In Race 1 at Assen, Jonathan Rea (Kawasaki Racing Team WorldSBK) made it 300 race wins for the UK, before making it 301 in the Superpole Race.

150 – With Alvaro Bautista and Iker Lecuona on the podium in Race 2 at Assen, Spain now has 150 podium places, just two behind France and in seventh overall.

110/109 – Alvaro Bautista currently leads the Championship with 109 points, one point less than Jonathan Rea’s tally after the opening six races of 2021.

100 – Jonathan Rea took a 100th victory for Kawasaki in WorldSBK in the Superpole Race, the first rider in the WorldSBK history to do this for one manufacturer. It was also his 17th win at Assen, an all-time record at any circuit that won’t be matched by him or anyone else at another track this year.

90 – In WorldSSP, Can Oncu (Kawasaki Puccetti Racing) gave Turkey a 90th podium in the class.

80 – With his second top five of the season, Alex Lowes (Kawasaki Racing Team WorldSBK) makes it his 80th overall in WorldSBK; in Superpole, he was under the existing pole lap record, taking second on the grid and a first front row of the year.

50 – Iker Lecuona’s points tally is 50, which is the highest for a Honda rider since the three-race format was introduced in 2019. Even before that, after the opening six races, the last time a rider scored 5o points or more was Michael van der Mark in 2016, who scored 74 – although all races were from full-distance races.

49 – Scott Redding (BMW Motorrad WorldSBK Team) took a first top five of the season for BMW, having come from 13th on the grid. This was his 49th top five finish in WorldSBK, as he aims for half a century in his next race.

45 – The points gap between Alvaro Bautista and reigning World Champion Toprak Razgatlioglu (Pata Yamaha with Brixx WorldSBK) is 45. This is more than at any point of the 2021 title battle – the most being 37 after Assen Race 2, when the Turkish rider was involved in another Turn 1 collision, taken out by Garrett Gerloff (GYTR GRT Yamaha WorldSBK Team).

22/2 – For the first time in 22 years, Ducati start a WorldSSP campaign with two podiums, with Nicolo Bulega in third place in Race 2 at Aragon and Race 1 at Assen. In 2000, it was Paolo Casoli who took a second at Phillip Island in Round 1 before winning Round 2 at home at Monza.

20 – 20 years since a first win at Assen, Ten Kate Racing made it a double as Dominique Aegerter (Ten Kate Racing Yamaha) won both WorldSSP races at the team’s home round for a second year.

14 – A fantastic Race 2 for Spain, with Bautista’s win and Lecuona’s third making it the first time two Spaniards were on the podium since Phillip Island’s Race 2 in 2008, when Carlos Checa – also a rookie on a Honda with the #7 – was second, with Suzuki’s Fonsi Nieto third. It has also been 14 years since the country’s last 1-2, with Fonsi Nieto taking his only career win in Race 2 at Losail in 2008, beating Ruben Xaus in second. This will be the next aim.

2/1 – Andrea Locatelli took a career-best WorldSBK result with second in Race 2 at Assen, his first podium of the year. He’s the 17th Yamaha rider to get five or more podiums for the manufacturer, now level with Garrett Gerloff. The most podiums for Yamaha without recording a win for the manufacturer is ten, set by Colin Edwards from 1995 to 1997.

2 – Only two riders have finished every race in the points in 2022: Alvaro Bautista and Iker Lecuona.

1 – A round of firsts for many WorldSBK riders: Philipp Oettl (Team Goeleven) took his first top ten in the class with seventh in Race 1, whilst Michael van der Mark (BMW Motorrad WorldSBK Team) and Lucas Mahias (Kawasaki Puccetti Racing) took first top ten finishes of 2022 with eighth and tenth in Race 2 respectively. Leandro Mercado (MIE Racing Honda Team) also took his and the team’s first point of the season with 15th in Race 2.

0.002s – In WorldSSP300, the closest finish ever seen in the WorldSBK paddock as Hugo De Cancellis (Prodina Racing WorldSSP300) took a maiden win from 19th on the grid by just 0.002s from Alvaro Diaz (Arco Motor University Team), who also came from 28th on the grid.

Watch the 2022 season chapter-by-chapter with the WorldSBK VideoPass!