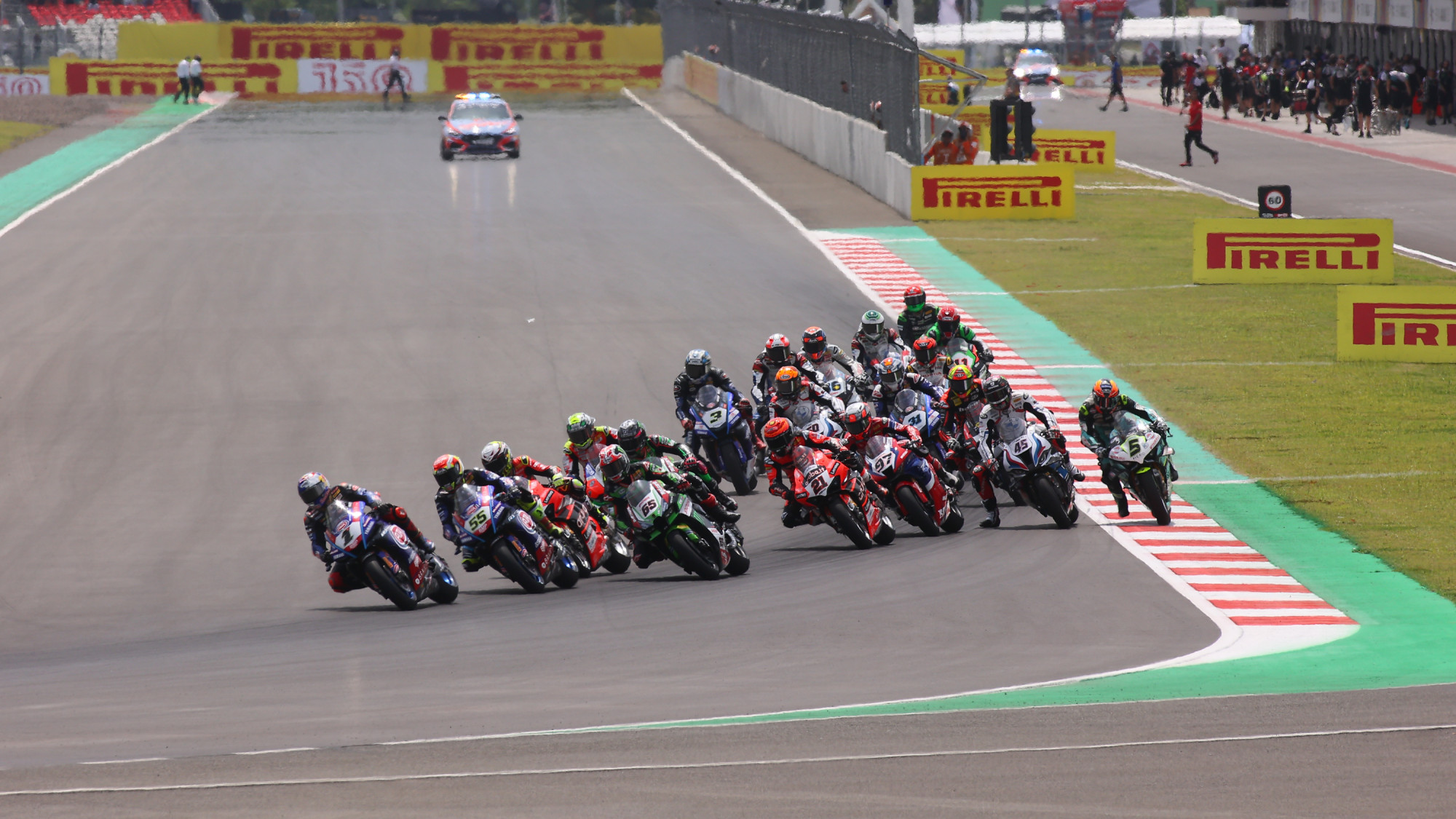 The sentence we’ve been waiting to write: WorldSBK has touched down in Australia and Phillip Island and, as the saying goes, ‘it feels good to be back’

It will have been 225 days since the 2022 MOTUL FIM Superbike World Championship fired into life when the final round’s first race gets underway on Saturday. 2022 has flown by in record-breaking speed as we’ve enjoyed the rollercoaster journey of another historic season of racing. So, it’s only fitting that a true classic venue brings us the showdown of the season, the 35th of WorldSBK action. The Grand Ridge Brewery Australian Round and the iconic Phillip Island Grand Prix Circuit will draw the curtains on a mesmerising season and with the titles decided, new development tyres joining the allocation and a first visit to ‘The Island’ since the start of 2020, the stage is set for a classic weekend Down Under. So, as quick as it all started, the final preview of WorldSBK in 2022 is here.

The title race is all done and dusted for Alvaro Bautista (Aruba.it Racing – Ducati), meaning he can relax for Australia and Phillip Island this weekend. The last time at Phillip Island saw Bautista debut for Honda and take two well-deserved top six finishes from 16th on the grid, but he’s perhaps best remembered for his emphatic debut with Ducati in 2019, when he swept to three dominant wins, the first of which was nearly 15 seconds and the biggest dry margin in Phillip Island’s WorldSBK history. Whilst the title is done, attention turns to the Manufacturers’ Championship; Ducati just need a top four finish and they’ve got the job done in Race 1, whilst the Teams’ Championship will be secured if they don’t lose more than 34 points to Pata Yamaha. The battle for fourth should be job done for teammate Michael Ruben Rinaldi, who is 34 points clear of Andrea Locatelli (Pata Yamaha with Brixx WorldSBK). Outscoring his countryman by four points will give him fourth overall.

In second place, it looks settled for Toprak Razgatlioglu (Pata Yamaha with Brixx WorldSBK), who relinquishes his crown after just one season. He’s 37 points ahead of title rival Jonathan Rea (Kawasaki Racing Team WorldSBK) and if he maintains that gap, he’ll take the runner-up position. Razgatlioglu has a good track record at Phillip Island and took a stunning maiden win with Yamaha, heading up WorldSBK’s second-closest podium of all time. The outgoing World Champion aims to sign off the season in style but knows that the combination of his rivals and their packages will be a strong one. Teammate Locatelli has a mathematic chance at fourth overall in the Championship but realistically, he’ll aim to get fifth bagged, with just 15 points covering three riders to seventh place.

Third place going into his “second home round” of the season, Jonathan Rea is on record as solely looking for race wins and whilst he’s conscious that a win won’t mean that he and his Kawasaki team don’t have to look for improvement, it’s something he’ll look to achieve. Six wins on ‘The Island’ for Rea, he is within striking distance of matching Troy Corser’s record of seven at the circuit, but he knows it’ll be tough. A Superpole Race win in 2020 is his only win in the last eight races there and he’ll be hoping to end his win drought, whilst teammate Alex Lowes is the most recent winner at the track as he held off Rea for victory in Race 2 in 2020. He’s sixth in the standings, 11 points behind Locatelli, who’ll face Phillip Island on a WorldSBK bike for first time.

BMW VS HONDA: a late surprise in the race for fourth in the Manufacturers’ standings?

It's game on for eighth in the Championship, although perhaps it is Scott Redding (BMW Motorrad WorldSBK Team) who already has it in the bag, as he’s one point clear of the injured Iker Lecuona (Team HRC). It’s a big weekend for Redding, who returns to Phillip Island for the first time since his WorldSBK debut weekend, where he took three podiums with Ducati back in 2020. Redding is the lead BMW rider in the Championship and whilst that’s already locked in, he’ll hope to propel the German manufacturer to fourth in the Manufacturers’ Championship, as they’re currently three behind Honda. Teammate Michael van der Mark was in the battle for victory aboard Yamaha machinery in 2020, and he’ll aim to end his 2022 season well and also help BMW take fourth.

After Iker Lecuona’s injury sustained in FP2 at Mandalika, he slipped to ninth in the standings and is one point behind Redding. Lecuona’s had a stellar first season aboard the Honda and has had podiums and plenty of top five finishes, although he’s a major doubt for the weekend ahead. Honda’s hope lie with Xavi Vierge (Team HRC), who looks certain to stay in the top ten in the Championship. He’ll have the aim of outscoring BMW to try and deliver fourth for Honda, at a circuit he knows well from his Moto2™ World Championship days. The Spaniard took a podium at the track in 2018 with third, as well a fifth the year before. Could he utilise Honda’s super concession update further this weekend?

Already crowned the best Independent Rider for 2022, Axel Bassani (Motocorsa Racing) is seventh and just four points off Lowes in sixth and just 15 from Locatelli in fifth. Bassani’s been a stand-out performer in WorldSBK in 2022 and he and the Motocorsa Racing team have delivered pound-for-pound. It is however Bassani’s first time at Phillip Island, so perhaps he’ll not be as far forward as we’ve seen before. Garrett Gerloff (GYTR GRT Yamaha WorldSBK Team) is the next Independent rider as he readies for a final weekend with his team at the track where it all began. Loris Baz (Bonovo Action BMW) is 17 points behind Gerloff but always goes well at Phillip Island, with it being the last track he led a race at back in 2020. After being ruled out of Race 2 at Mandalika, Philipp Oettl (Team Goeleven) hopes to be back fit enough for the season finale, whilst it’s the same for Lucas Mahias (Kawasaki Puccetti Racing) behind him, the Frenchman going to Australia for his final round with Manuel Puccetti’s outfit.

In 16th overall, Eugene Laverty (Bonovo Action BMW) is getting ready for an emotional final round of his career and will look to sign off on a high at the circuit he took a last victory at back in 2014 for Suzuki. Xavi Fores (BARNI Spark Racing Team) has Laverty in his sights for Championship position and has been a podium finisher in Australia before, whilst he’s just ahead of Kohta Nozane (GYTR GRT Yamaha WorldSBK Team), who also gets ready for his final round in WorldSBK before he moves to Moto2™ World Championship action in 2023. Completing the running, Hafizh Syahrin (MIE Racing Honda Team) and teammate Leandro Mercado hope for more points before their season ends, whilst after becoming the 587th different rider to score points in WorldSBK history, Oliver Konig (Orelac Racing VerdNatura) will hope to continue that trend on his Phillip Island WorldSBK debut.

Get the Official Phillip Island programme here for FREE and watch the last round of 2022 FREE when you purchase the 2023 WorldSBK VideoPass, here!