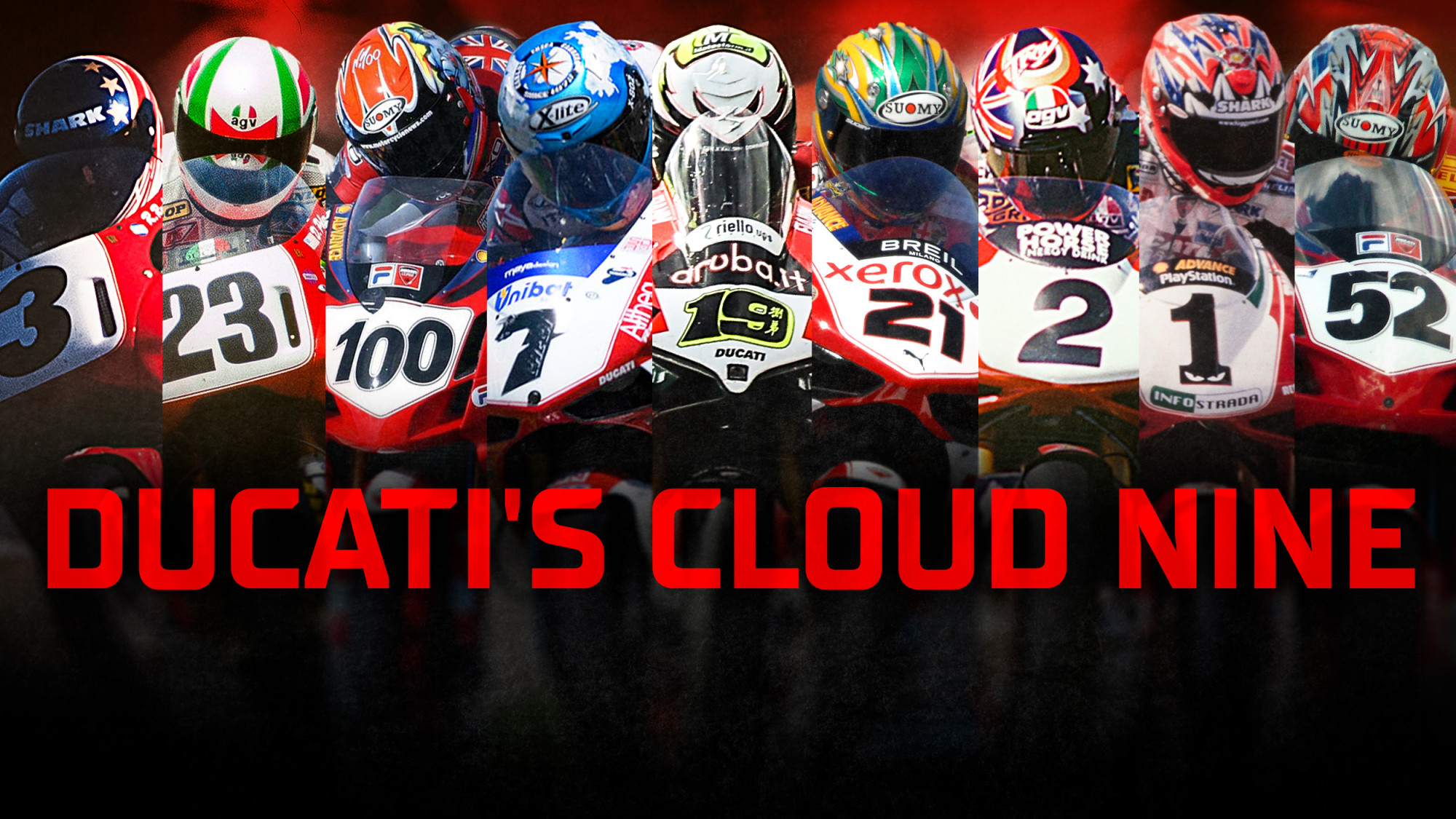 The 11-year wait is over for a Ducati Champion in WorldSBK, and the Championship’s most successful manufacturer is back where it’s been familiar with being for so long…

A hot and humid weekend in Indonesia crowned the 2022 MOTUL FIM Superbike World Champion, with Alvaro Bautista’s (Aruba.it Racing – Ducati) hard work and tenacity throughout the season paying off in fine style. A second place in Race 2 on Sunday was good enough for the Spaniard, who ended Ducati’s Championship drought and took a first WorldSBK title in his fourth season in the paddock. However, as much as the title heads to Talavera de la Reina, Spain, it’s also gone back to Bologna as Bautista will surely join MotoGP™ World Champion Francesco Bagnaia in having his painting on the side of the factory walls. So, what better time than to look back at Ducati’s previous successes and celebrate the manufacturer’s awesome history.

WHERE IT ALL BEGAN: Roche and Polen break ground

Whilst Ducati would become synonymous in WorldSBK, they weren’t the manufacturer to beat in the opening two years; that went to Honda in 1988 and 1989 when American rider Fred Merkel took to WorldSBK like a duck to water. However, by the arrival of Raymond Roche in 1989, Ducati’s charge was building and for 1990, he was a dominant Champion. That would be the first of eight titles throughout the 1990s, as Ducati didn’t just become dominant, but they became fashionable and a manufacturer that all WorldSBK riders had the aspirations to ride for. In 1991 and 1992, Doug Polen was double Champion but right behind him was Ducati colleague Roche in both years, two of five times where they’d lock out the top two places in the Riders’ Championship.

With two Champions crowned already, a new star was born when Carl Fogarty burst onto the WorldSBK scene; despite a first race win coming on a Honda, his switch to Ducati in 1993 very nearly gave him the World Championship. However, 1994 would sound a fog warning; the year went to ‘Foggy’ in a Phillip Island showdown and be backed it up in 1995. Fogarty tried the unthinkable in 1996 and switched to Honda, in a bid to take the title with two manufacturers in back-to-back years, something he couldn’t achieve and something that remains to be done. Ducati kept winning as 1995 rookie and runner-up Troy Corser came good and stormed to the title, taking the crown in Australia.

Come 1997, Ducati were beaten for the first time since 1993 when John Kocinski and Honda swept to success, although Fogarty was now back in the factory Ducati team. After a year of winning on his way to runner-up in 1997, the Englishman was back with a bang in 1998 and despite taking just three wins, consistency paid dividends as he took a third title. However, it’s perhaps 1999 that Fogarty is most famous for; the iconic #1 Ducati 996 helped him to one of his most dominant seasons, as he cruised to a fourth World Championship, the first-ever four-time World Champion. That would be his last, after a career-ending accident at Phillip Island in 2000, but his replacement was on his way…

Winning his first race at the Hockenheimring in 2000, Troy Bayliss came into WorldSBK as 1999 BSB champion and was set to compete in the AMA Superbike series but was soon called upon to take Fogarty’s place in the factory WorldSBK team. Two wins and seven more rostrums saw Bayliss return in 2001, dominating the Championship, becoming Ducati’s next golden son. Despite relinquishing the crown in the epic showdown of Imola in 2002 to Colin Edwards and Honda and with Bayliss moving to MotoGP™, Ducati’s presence on the WorldSBK grid grew stronger and in 2003, Neil Hodgson returned the title to Italy, with the top four in the Championship being locked out by the Italian constructor; Ruben Xaus and James Toseland were on the winners’ list right behind, whilst Regis Laconi took fourth, earning him a factory ride as number one rider in 2004 with Toseland joining.

The 2004 season was a true classic and Ducati went into the final round with three riders mathematically in contention. Realistically though, it was always going to be between the factory bikes of Regis Laconi and James Toseland, with the latter being somewhat of an underdog. That didn’t deter JT, who won Race 1 to take the lead of the Championship, before taking second in Race 2, securing an unlikely crown. Ducati locked out the top three in the Championship once again, although it’d be the last time it’d happen.

2005 went the way of Suzuki and Troy Corser but 2006 welcomed Troy Bayliss back to WorldSBK after three seasons in MotoGP™; Bayliss was dominant from the start, winning eight of the first nine races before wrapping up the title for Ducati at Imola, in a momentous Sunday in Emilia-Romagna. The crown slipped once more in 2007 as James Toseland took it to Honda, whilst Bayliss, in his swansong season, got the title back in 2008 in a dominant display of riding, becoming a triple World Champion and the second most successful rider in Ducati’s history after Fogarty. Noriyuki Haga missed out in 2009, whilst Ducati never looked quite on the pace throughout 2010. However, in 2011, there last for 11 years as Carlos Checa rocketed to a first World Championship for Althea Ducati, the first World Champion from Spain.

PAINFUL WAIT: so close, so far, so many times

Nobody thought that Ducati, the Championship’s most successful marque, would wait 11 years after Checa’s triumph. The Ducati Panigale model was released for 2013 and took a pole in its first round but it wouldn’t be until Chaz Davies in 2015 that it’d win a race. The Panigale V-Twin couldn’t take the crown as Ducati were out-done each season by WorldSBK’s most successful rider Jonathan Rea and his Kawasaki team. The switch to a V4 engine configuration in 2019 saw Alvaro Bautista move from MotoGP™ to WorldSBK and win the first 11 races of the 2019 season, but mid-season crashes and bad luck would result in Rea retaining the title. Scott Redding was a rookie in 2020 and finished as runner-up, whilst in 2021, he was third as Michael Ruben Rinaldi became the latest winner for the brand. Runners-up in 2015 and from 2017 to 2020, Ducati’s title surely had to come soon…

But it all came good in 2022; a humble Bautista – after two years with Honda – came back with more understanding and knowledge of WorldSBK and put it to use to finish the job that started in 2019. Back then the package of Bautista and Ducati was already unbeatable, but the question was more of whether it could be sustained over the course of the season. One of the favourites in the titanic trio of 2022, Bautista kept a cool ahead as his main title rivals – reigning World Champion Toprak Razgatlioglu (Pata Yamaha with Brixx WorldSBK) and Jonathan Rea (Kawasaki Racing Team WorldSBK) began to make mistakes, as they fought on the limit to keep Bautista behind. Magny-Cours and Barcelona were turning points in the title battle as Bautista shone as those around him faltered, whilst a mistake from Razgatlioglu in Race 1 at San Juan left the ball in Bautista’s court. Smart riding in Indonesia took him to the title, 16 years after his 125cc World Championship and returned the WorldSBK crown to Bologna as he becomes the ninth rider to achieve a title for Ducati.