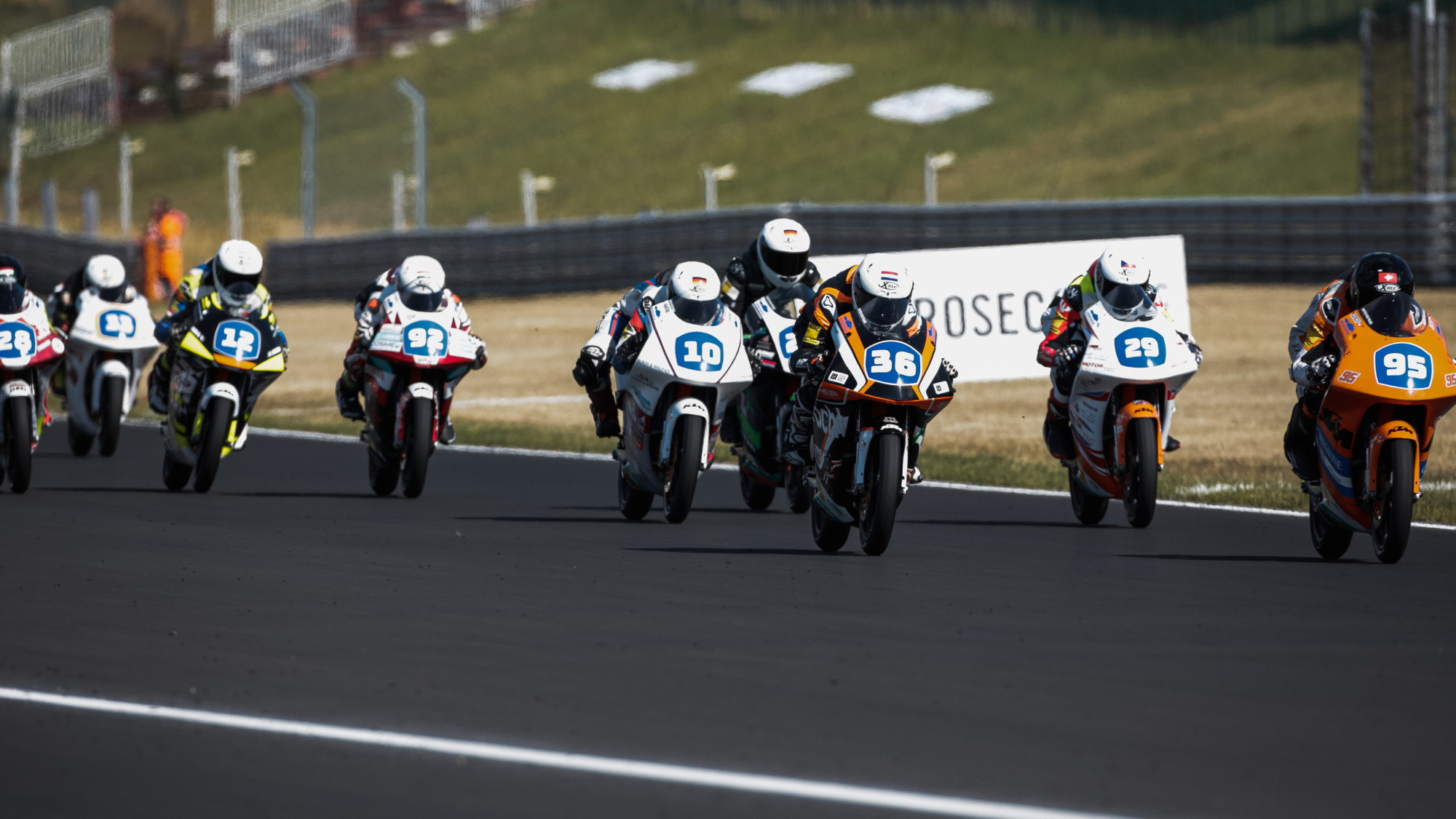 The MOTUL FIM Superbike World Championship was joined by the Northern Talent Cup during the Prosecco DOC Czech Round, with title leader Rossi Moor (Fairium Next Generation Riders) and Kevin Farkas (Agria Racing Team) taking a victory apiece at the Autodrom Most. As was the case over the Czech Round, the racing was fierce with two different winners from the two races after some incredible racing at the Autodrom Most.

Moor bounced back from his Assen crash with a last-lap victory at the Autodrom Most after a thrilling opening race in the Northern Talent Cup, with Moor utilising the slipstream to claim victory in the Czech Republic and extend his title lead ahead of Kevin Farkas (Agria Racing Team), with the gap now at 36 points, although Farkas was able to limit the damage with second place. Valentino Herrlich (Busch Und Wagner Racing Team) joined Moor and Farkas on the rostrum in third place.

The race was shortened to nine laps following a red flag following a Turn 7 crash for Matteo Masili (Fairium Next Generation Riders Team). At the subsequent restart, Moor fought his way up from sixth place to move into the lead of the race at Turn 1 on Lap 2 and he remained in the front fight throughout. The lead changed hands on numerous occasions throughout with the slipstream in full effect down the start-finish straight at the Autodrom Most.

On Lap 4, Filip Novotny (Brno Circuit JRT) had a crash on the approach to the Turn 1-2 chicane involving Dustin Schneider (Goblin Racing), which forced him out of the race while fighting towards the front of the field, while Schneider was able to continue but brought his bike back to the pits. Schneider eventually was classified in 20th place, a lap down, after re-joining the race following his time in the pit lane.

As the closing stages of the race approach, there was a lead group of around 11 riders fighting for victory but Moor, initially making a move at Turn 1 at the start of the final lap, was able to use the slipstream of Herrlich in front to claim his fifth victory of the 2022 season. Herrlich had crossed the line in second place, but was demoted for exceeding track limits on the run down to Turn 1 on the final lap, meaning Farkas was promoted to second ahead of Herrlich in third.

Loris Veneman (TeamNL Open Line) finished in fourth place and was only 0.5s away from victory at the end of the nine-lap race, with Tibor Varga (Forty Racing) taking fifth place. Lenoxx Phommara (Team Phommara) claimed sixth place at the Autodrom Most, finishing ahead of Martin Vincze (Chrobak Motorsport Egyesület) in seventh and Rocco Sessler (MCA Racing) in eighth; the top eight riders in the race were separated by just 0.741s at the chequered flag. Jurrien van Crugten (BB64 Academy) finished ninth with Julius Coenen (Helena and Julius Racing) completing the top ten. Polesitter Maxime Schmid (Schmid Racing) had to take a ride through penalty for breaking the rules regarding testing, with the Swiss rider finishing in 17th place.

RACE 2: Farkas flies off into the distance, Moor overcomes penalty for a podium

There was no stopping Farkas in Race 2 of the Northern Talent Cup at the Autodrom Most after the Hungarian rider claimed victory by more than eight seconds. Farkas was joined on the podium in the Czech Republic by Rossi Moor (Farium Next Generation Riders) and Loris Veneman (TeamNL Open Line) after a ten-rider fight for second place.

Farkas moved into the lead of the 14-lap race on Lap 3 as he swept from fifth to first through the Turn 1-2 chicane, and from there he was able to take advantage of the fighting behind him to open up a gap. At the end of the race, Farkas claimed victory by 8.504s over Moor in second place for this third victory with the gap between Farkas and Moor in the title fight standing at 31 points with two rounds left of the 2022 season.

Moor was one of ten riders fighting for second place in the race, while he also had to overcome a double Long Lap Penalty for work being carried out on his bike after the three-minute board had been shown on the grid. This dropped him to the back of the group fighting for second place, but with six laps to go had started his fightback. On Lap 10, he moved into fourth place at Turn 1 and, a lap later, had moved into second. Moor was third on the run to the line on the final lap but was able to slipstream his way past Veneman to claim second, with Veneman finishing in third place.

As the race approached the crucial final stages, riders were fighting hard for second position and a podium place with several riders, including Tibor Varga (Forty Racing) and Martin Vincze (Chrobak Motorsport Egyesület), making moves into Turn 1 to move into second place after utilising the slipstream down the start-finish straight.

Just half a second separated the riders from second place down to 11th place. Vincze finished in fourth place and missed out on a podium by just 0.029s, with Dustin Schneider (Goblin Racing) in fifth place. Lenoxx Phommara (Team Phommara) was sixth at the end of the race with Jurrien van Crugten (BB64 Academy) in seventh place; Crugten was only two tenths away from a podium place. Rocco Sessler (MCA Racing), Varga, who made a move for second place at Turn 1 at the start of the final lap, and Maxime Schmid (Team Schmid) completed the top ten. After finishing on the podium in Race 1, Valentino Herrlich (Busch und Wagner Racing Team) was the sole retirement in Race 2 after a crash at Turn 21.