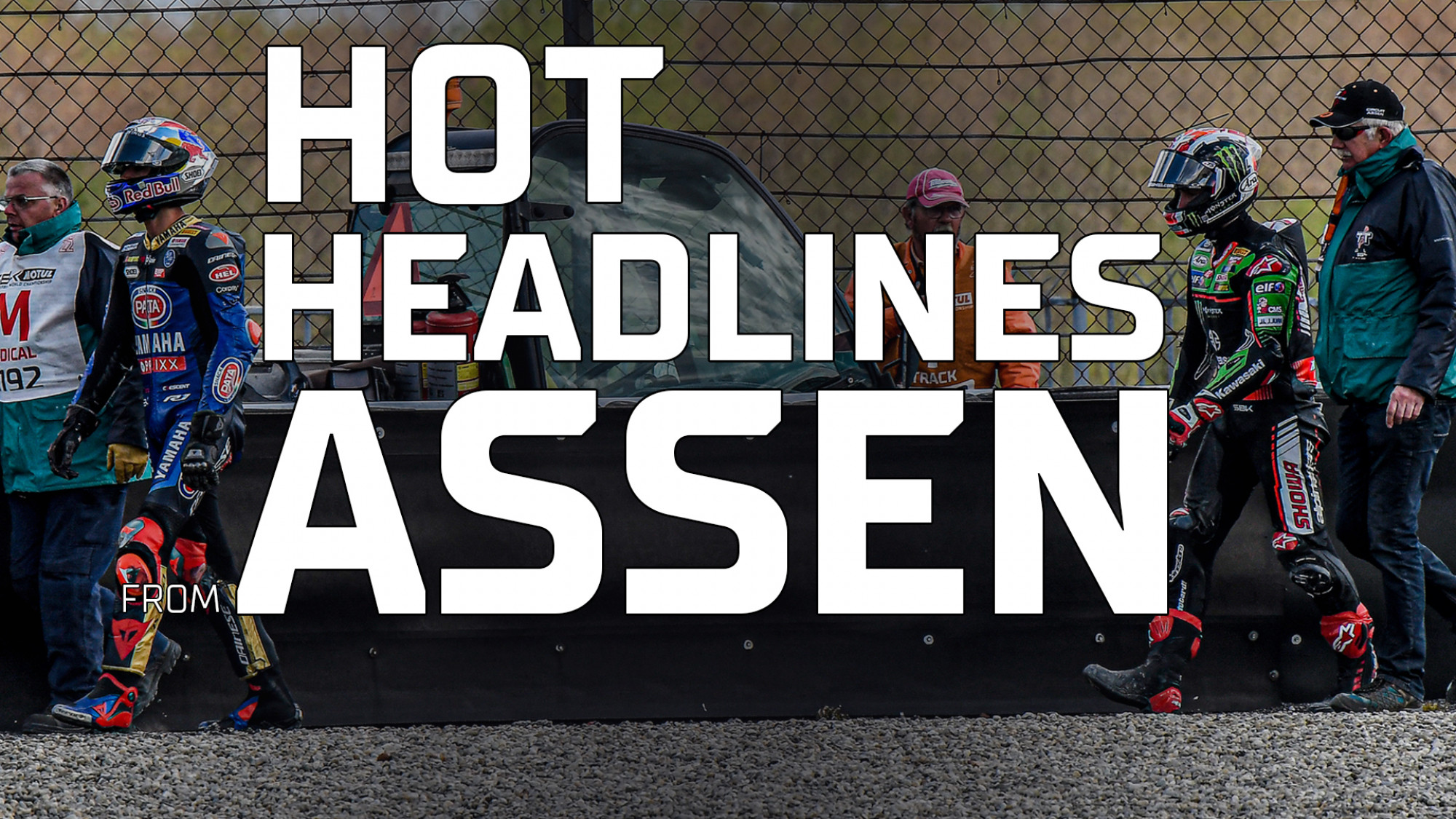 It has finally happened: one of WorldSBK’s greatest rivalries has seen both riders clash and crash, whilst a rookie mounts the podium and the Championship lead changes…

Drama. Excitement. Adrenalin and more. The 2022 MOTUL FIM Superbike World Championship is only two rounds old but already, there’s been a clash of titans. The Motul Dutch Round had all the stories, from picking up the pieces, a rivalry now at an all-time high and home heroics. We caught up with the heavy hitters and all the fighting talk, including two riders who took centre stage after a Race 2 clash resulted in a crash…

Jonathan Rea (Kawasaki Racing Team WorldSBK): “He knew I’m right beside him… I expected some space”

Kicking off this week’s hottest quotes, Jonathan Rea provided us with his side of the story after his Race 2 clash: “The facts are that he made a mistake, he’s wide – not completely off the track but wide. He’s completely slowed the speed down to avoid going off the track and instead of giving room to me, who he knew I’m right beside him because I almost overtook him in Turn 1, he committed to coming straight back on the track. I was on the racing line, carrying a normal race speed. If it’s a data thing, check my data, it’s probably slower because I anticipated maybe something… but I was through at this point. I expected in this position, some space. It was unfortunate because we threw away points when I felt like I could have raced for 25 today.”

It was fair to say that reigning World Champion Razgatlioglu was far from impressed, giving his version of events: “I think he needs to watch the crash again, from my camera, not his camera. I am in front, it’s not possible to see him. I go a bit wide, I close the gap and going to come back. I think he needs to check; he’s not looking to the left. I think his plan is to push me outside; he’s not looking at me. After the crash, I haven’t spoken with him. I haven’t said anything because he knows, and I know. He’s talking about his side; I am talking reality. I think everybody who watched the video sees it clearly. It’s his mistake because he’s not directly looking at me.”

Alvaro Bautista (Aruba.it Racing – Ducati): “One time, it had to happen; we’ve seen many fights with them…”

With a front row seat, Alvaro Bautista saw it all unfold in front of him, and said that after the battles of 2021, the clash had been coming: “For me, it seems like Toprak went a bit out. He went to the kerb but not off track, just on the kerb. Jonathan was inside but behind and then was fast, looking for the normal line. Toprak was on that line, so they stayed together in the same place at the same moment and there wasn’t space for two riders. They touched. They’ve touched in the past, but this time it happened what didn’t happen in the past! One time, it had to happen; we see many fights with them in the past. I was behind and I was so lucky. I was braking. I had no space because I had Jonathan’s bike, Toprak’s bike and I was here. When I came back, Lecuona on my right and bam, he hit me on the side. Then I go into Turn 3, and I felt a big impact on my ribs. I was so lucky.”

Iker Lecuona (Team HRC): “I’m so happy to finish on the podium with Honda… I felt like the team and the factory believed in me”

A first WorldSBK podium and momentarily leading, Iker Lecuona had a fine Round 2: “Honestly, a crazy weekend for me! From P5 on the grid, I know that in the first few laps, I can make a gap with the guys in the second group and maybe try to fight for the podium. In the moment of the crash with Rea and Razgatlioglu, I said ‘this is the time to push’. I overtook Alvaro and Andrea; I tried to push and make a gap, but I knew that Alvaro was fast, so I tried to follow him and make more of a gap. Locatelli was also very fast and followed too. I struggled a lot with the rear tyre and had zero grip. I didn’t expect it, but I’m so happy to finish on the podium with Honda! From the moment I arrived, I felt like the team and the factory believed in me. This has been more important for me all weekend. I had two crashes but the Japanese guys and the team saying “eh, calm” because I did good work.

“I’m a rider that likes to adapt to the bike so that I can take all the profit that I can. My dad said last night that he believes in me more than anybody, more than my mum for example. He knows very well and comes with me everywhere and knows that if I am focussed and do my 100% on the bike, I can fight for the podium. I said today is the day and to put everything on the line.”

Scott Redding: (BMW Motorrad WorldSBK Team): “I was wrestling it; it feels like I’m riding a f***ing alligator”

A stunning top five in Race 2, did Scott Redding find a breakthrough? “There was chaos in the first corner, and I got lucky to come through. Then there was the crash between Jonny and Toprak. The pace in front, they just rolled the throttle. I was on the limit trying to get on the back of them. I got on the back of them, and I was quite comfortable. I was able to come through on Bassani, Rinaldi and Lowes and was feeling quite good but literally at 110%. I was wrestling it. It feels like I’m riding a f***ing alligator or something. I feel like I put my money’s worth in it. With a few laps to go, I got a small hole in the rear tyre on the right side, so I had no rear grip. I was tipping in, and it was just coming around. I just wanted to finish. Alex passed me, Bassani passed me. We battled a bit, I tried to be defensive but there was no grip.”

Kawasaki’s Alex Lowes was full of admiration for ex-teammate Michael van der Mark, whilst saying that the BMW isn’t as far away as some may think: “Look at Mikey, one leg and finishing eighth. Redding was challenging to win here last year and won races last year. I raced with Mikey last year when he was with the BMW; I don’t think the bike has gone backwards, it’s just Scott’s joined the team coming from Ducati so that will take time to adjust. It’s not gone backwards, the three guys at the front are going fast but it’s tight now, and it doesn’t take much to be there. He was riding well; the bike was fast, and it will just take time to adjust. When Michael’s back fully fit and they’re pushing each other, I don’t think they’re as far away as they think.”

Michael van der Mark (BMW Motorrad WorldSBK Team): “If I wasn’t sure, I wouldn’t have come”

It was a fine return to action on home turf for Michael van der Mark, as he took a top ten on Sunday: “If I wasn’t sure, I wouldn’t have come. It was tough, especially Friday and Saturday. I couldn’t ride longer than four or five laps. On Saturday, when I did the whole race distance, I was really happy. I scored some points. I didn’t expect to do the whole distance because fitness and training wise, I couldn’t do a lot in the last couple of weeks. I couldn’t cycle a lot, I couldn’t walk. It was good to get on the bike again and get bike fit. In Race 2, a lot of things happened around me. I gained 13 seconds compared to Saturday. I finished eighth and I think we must be happy to be here. In Race 1, in the last couple of laps, I struggled a lot. Sunday was a lot better. As you can imagine, it’s not ideal.”

THE FIGHT HAS IGNITED; THE DRAMA WILL CONTINUE: enjoy it all with the WorldSBK VideoPass!