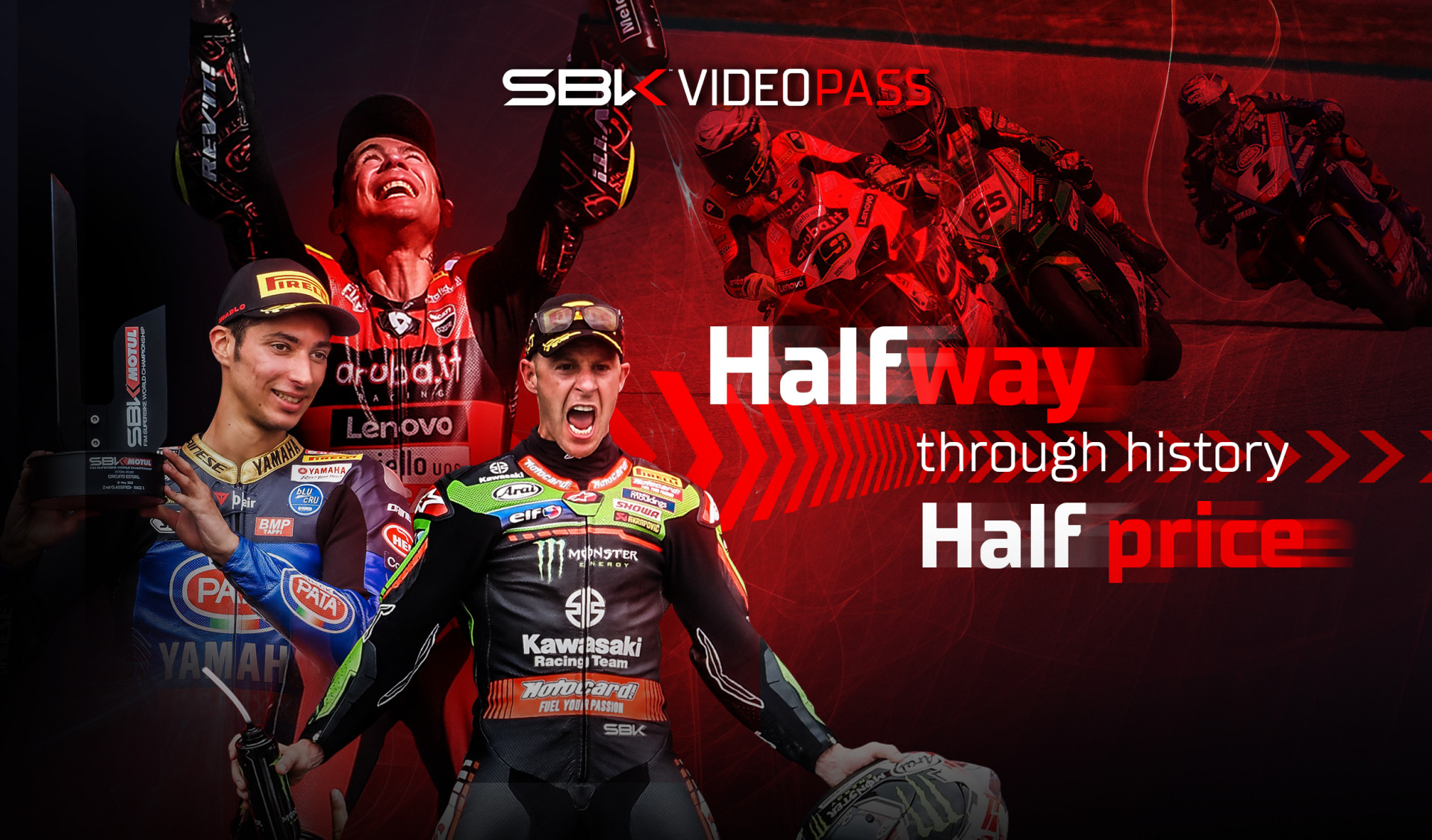 To mark the halfway point of an enthralling 2022 campaign, VideoPass is half price throughout the summer break

The MOTUL FIM Superbike World Championship 2022 season has been unmissable so far, with incredible action, fierce fighting, title rivals colliding, and plenty of shocks, surprises, twists and turns along the way. With six rounds completed and just 38 points separating the top three in the title fight, now is a great opportunity to purchase the WorldSBK VideoPass to ensure you do not miss a single moment of the titanic title fight that is unfolding in a historic season. Between August 1st and September 9th, you can purchase VideoPass for HALF PRICE, only €34.99, to ensure you don’t miss any of the action in the second half of the season. Click HERE to purchase the WorldSBK VideoPass for the second half of the season.

The season kicked off in style at MotorLand Aragon as Alvaro Bautista (Aruba.it Racing – Ducati) and Jonathan Rea (Kawasaki Racing Team WorldSBK) in Race 1 with a stunning last-lap fight, with the race for victory going down until the very last corner. Two weeks later and the drama continued at the TT Circuit Assen as Rea and reigning Champion Toprak Razgatlioglu (Pata Yamaha with Brixx WorldSBK) came to blows in Race 2.

Next up was a return to the Circuito Estoril and what happened in Portugal could not have been scripted. Three incredible races and three stunning last-lap deciders. Bautista came out on top in an instant classic after Rea and Razgatlioglu constantly swapped places constantly in Race 1, before an epic save from Razgatlioglu in the Tissot Superpole Race cost him victory against Rea. In Race 2, Rea came out on top again after a monstrous last couple of laps to close the gap to Bautista before making a stunning move on the Spanish rider.

The paddock headed to Italy and the Misano World Circuit “Marco Simoncelli” next, with Razgatlioglu able to claim his first win of the season in the Superpole Race and kickstart his title defence. After a short break, Donington Park beckoned with more twists in the title race as Bautista crashed out of Race 1 at the final corner while in second place. Both Rea and Razgatlioglu were able to halve their gaps to Bautista in the Championship and it was game on in the Czech Republic. More incredible battles followed at the Autodrom Most, with the weather threatening to play havoc in Race 1, while the Superpole Race and Race 2 featured thrilling scraps throughout at the front of the field.

Only 38 points separate Bautista, Rea and Razgatlioglu in the title standings at the halfway point of the season and, with Razgatlioglu hitting a rich vein of form while Rea has not won for nine races, the title race is set to get more exhilarating when WorldSBK returns at Magny-Cours. You can watch the remainder of the 2022 season using the WorldSBK VideoPass for HALF PRICE, with the service costing only €34.99. This offer runs from August 1st until September 9th and gives you access to the VideoPass service to watch a historic title fight unfold.

Not only do you get to watch EVERY race live and uninterrupted on the WorldSBK VideoPass, you can watch every Free Practice session and every Tissot Superpole session from WorldSBK, WorldSSP and WorldSSP300 with all three title battles set for a thrilling conclusion. Expect more bar-to-bar battles, more drama, more twists and turns as the top three fight it out for glory in 2022.

What are you waiting for? Subscribe to the WorldSBK VideoPass for HALF PRICE now!