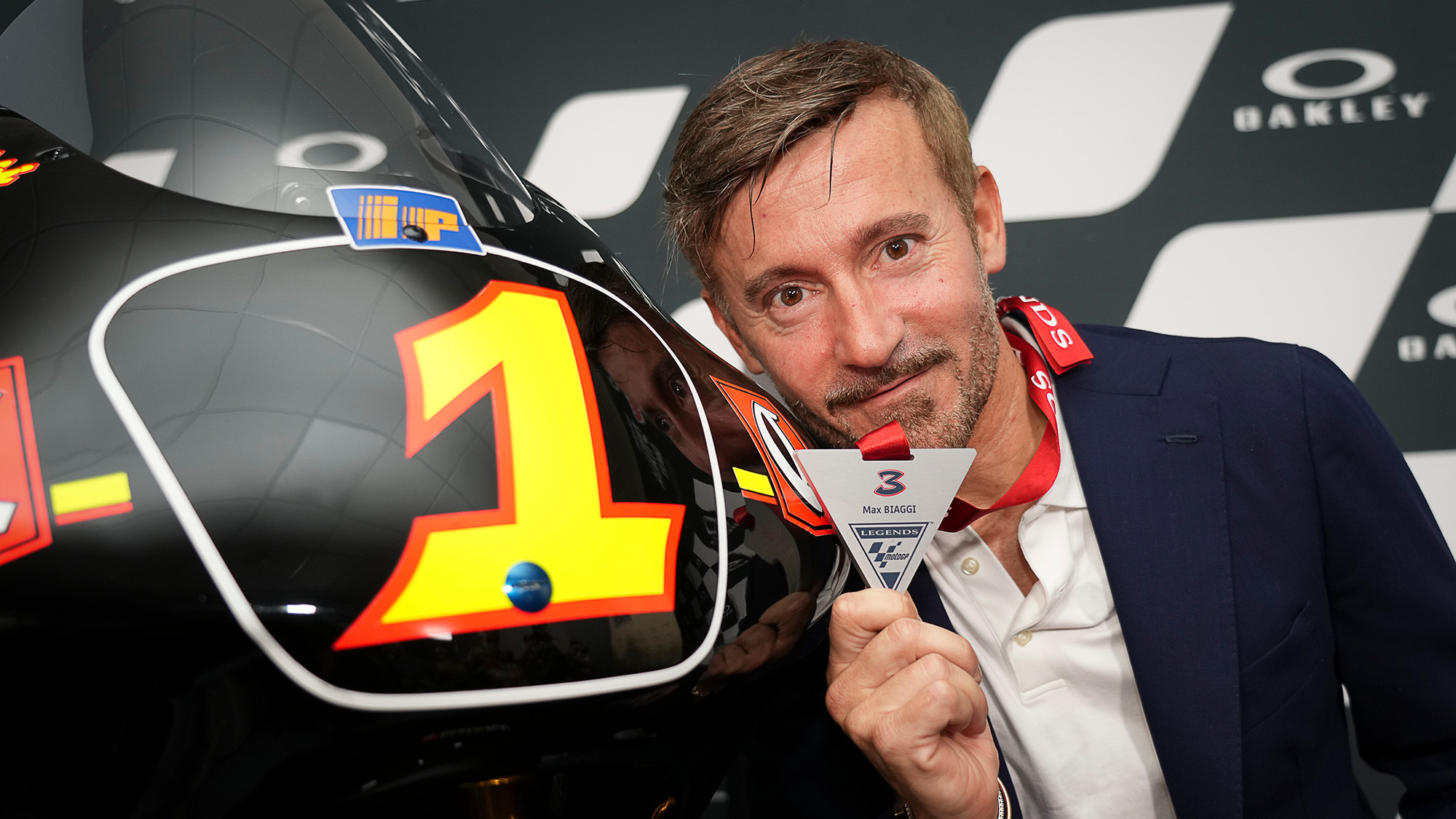 Max Biaggi is now officially a MotoGP™ Legend; the four-time 250cc World Champion was inducted into the MotoGP™ Hall of Fame at the Gran Premio d’Italia Oakley, with the spectacular Autodromo Internazionale del Mugello proving the perfect backdrop. Dorna CEO Carmelo Ezpeleta presented Biaggi with his MotoGP™ Legend Medal at the ceremony on Friday, with plenty of famous faces from the paddock in attendance. Biaggi switched to the FIM Superbike World Championship in 2007 and became one of a few riders to take a debut win, whilst he’d take two titles in 2010 and 2012, becoming a six-time World Champion before he retired.

Incredibly – given the career he would go on to build – Biaggi started racing late, first competing at the age of 18. From there, his rise was stratospheric as 1991 saw his first Grand Prix races and points in the 250cc class, 1992 heralded his first win and by 1994, the “Roman Emperor” was a World Champion for the first time – also taking Aprilia’s first title in the 250cc class. The glory didn’t stop there, as Biaggi took the 250cc crown an incredible four times in a row and with two different factories, reigning the category from 1994 until 1997 inclusive and reserving his place in history as one of the best ever to race in the class.

In 1998 Biaggi moved up to the premier class and, incredibly, he won on his 500cc debut – something not repeated since. He came runner up that year and began another run of impressive performances, never finishing outside the top five in the Championship in any premier class season between 1998 and 2005, his final hurrah in MotoGP™. By the time Biaggi departed the Grand Prix paddock he had accrued 42 victories, of which 13 were in the premier class, and 111 podiums and 56 pole positions overall.

However, his motorcycle racing career was far from over, as he moved to WorldSBK for 2007 with the iconic Alstare Suzuki team and won on his debut at Lusail, before finishing third overall by the end of the season. For 2008, he moved to Sterilgarda Ducati where he wasn’t able to win, before leading the factory Aprilia project, as they returned to the Championship. He’d take the title in dominant fashion in 2010 and then again in 2012, although the latter would see him clinch it by just half a point ahead of Kawasaki’s Tom Sykes, the Championship’s closest points finish.

Retiring at the top and closing his career with Aprilia, the same manufacturer of which it started with back in 1991, Biaggi took 21 wins and 71 podiums in the Championship and is therefore the first MotoGP™ Legend to also be a WorldSBK Champion. Since, Biaggi has remained in both paddocks, wildcarding in WorldSBK with a podium in 2015 before becoming a team principal in the Moto3™ World Championship from 2019 until present. Biaggi is one of the only two riders who have clinched a title in both GP racing and WorldSBK, along with John Kocinski, who won the 250cc World Championship in 1990 and the WorldSBK Championship in 1997.

You can watch the full induction ceremony here and enjoy the 2022 WorldSBK season with the WorldSBK VideoPass!