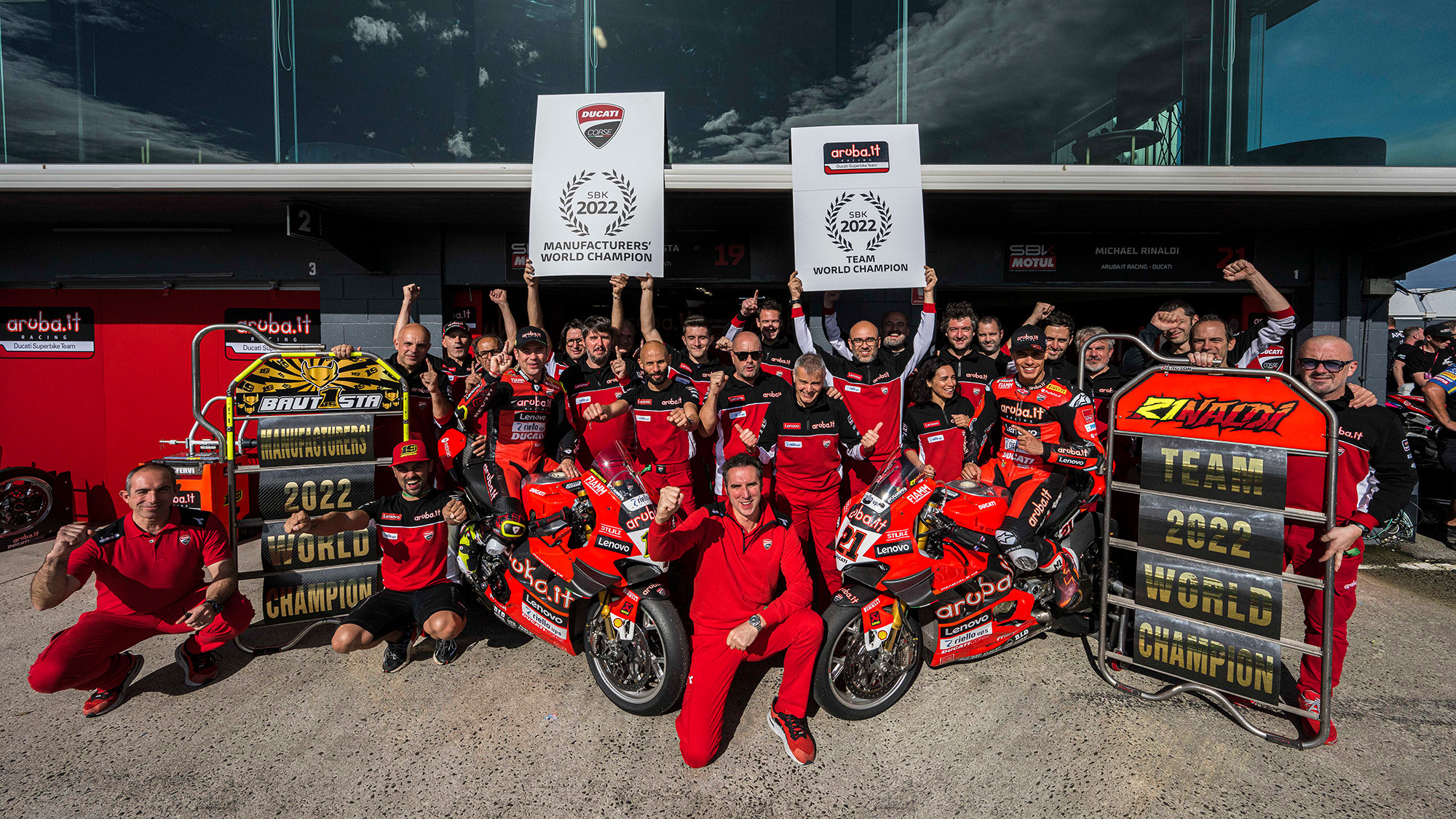 From Bautista brilliance to Ducati dominance and another Teams’ title, Ducati really did sign their place in modern WorldSBK history

They’re a synonymous manufacturer in the MOTUL FIM Superbike World Championship and 2022 saw them come back to the fore and take the title by storm. Ducati were back to their absolute best this season and were deservedly crowned Champions with Alvaro Bautista (Aruba.it Racing – Ducati). However, his teammate Michael Ruben Rinaldi helped the factory team to the Teams’ Championship whilst stand-out performances from Axel Bassani (Motocorsa Racing) also secured the Manufacturers’ Championship for Ducati. In what was a historic triple crown, we take a look at the high-points of the season, the role of the Independent riders and to see where the triple achievement stands in the context of the Championship’s history.

FROM THE START: magic in the air as Bautista returns to red

2022 was the big comeback year for Alvaro Bautista, as after two years developing the Honda in the Japanese manufacturer’s first factory challenge since 2002, he was back in Ducati red, where he started his WorldSBK career in 2019. From the start, there was a sense of #TheReturn being more about completing what they set out to do three years ago. With more time on the Pirelli tyres, in the Championship and with the Ducati making a step in performance with the Panigale V4 R, the package was even stronger with Bautista and now, he'd understand more, something he constantly eluded to in the course of the season.

From the start of testing, it was clear that Bautista was fast and that Ducati had made a step and by the time Aragon and Round 1 were upon us, it was even clearer that Bautista was back with a bang. Missing out in a final lap shootout with arch-rival Jonathan Rea (Kawasaki Racing Team WorldSBK) in Race 1 of the season, Bautista doubled up on Sunday to leave the opening round of the year as the points leader. By Assen, he took advantage of the Rea vs Toprak Razgatlioglu (Pata Yamaha with Brixx WorldSBK) clash at Assen and the continuation of the fighting at Estoril in Race 1. It was clear that Bautista was smarter, more patient but still a fierce threat on outright pace too, and the package of him and the Ducati was the strongest on the circuit.

As the season progressed, Bautista got into his stride; a double at Misano in front of Ducati’s big bosses such as CEO Claudio Domenicali, Sporting Director Paolo Ciabatti and General Manager Gigi Dall’Igna was a strong showing, whilst a surprise win at Most gave Ducati their 1000th podium. At Magny-Cours, Ducati really kicked on with victory in Race 1 with Bautista whilst Bassani took a first rostrum of the year in third, whilst Rinaldi was second in Race 2 for his best result of the season, once again ahead of Bassani. Meanwhile Barcelona beckoned and Bautista made it a hat-trick, his first in three years. He won again in front of his passionate fans in Portugal at Portimao, before another win followed at San Juan as title rival Razgatlioglu crashed out.

Despite a Razgatlioglu triple at Mandalika, Bautista was able to wrap up the title in Race 2 and become the first Ducati Champion in 11 years and also the first for Ducati since the Panigale model was introduced in 2013. However, the triple crown was completed for Ducati in Race 1 at Phillip Island, as they wrapped up their first Manufacturers’ Championship since 2011 with a fifth place by Champion Bautista, which was also enough to give the Aruba.it Racing – Ducati team the Teams’ Championship, their second after wrapping it up in 2020. It’s a memorable season for Ducati, as they likewise achieved the triple crown in MotoGP™, just their second after their 2007 success.

In terms of stats, Kawasaki achieved the triple crown from 2015 to 2019, whilst Yamaha achieved it for the first time in 2021, when Toprak Razgatlioglu was crowned Champion, Yamaha achieved the Manufacturers’ title and Pata Yamaha with Brixx WorldSBK won the Teams’ Championship. For Ducati, it’s the 18th title in the Manufacturers’ Championship and their 15th Riders’ title. Ahead of 2023, only four riders have successfully defended the WorldSBK title, can Bautista become the fifth?