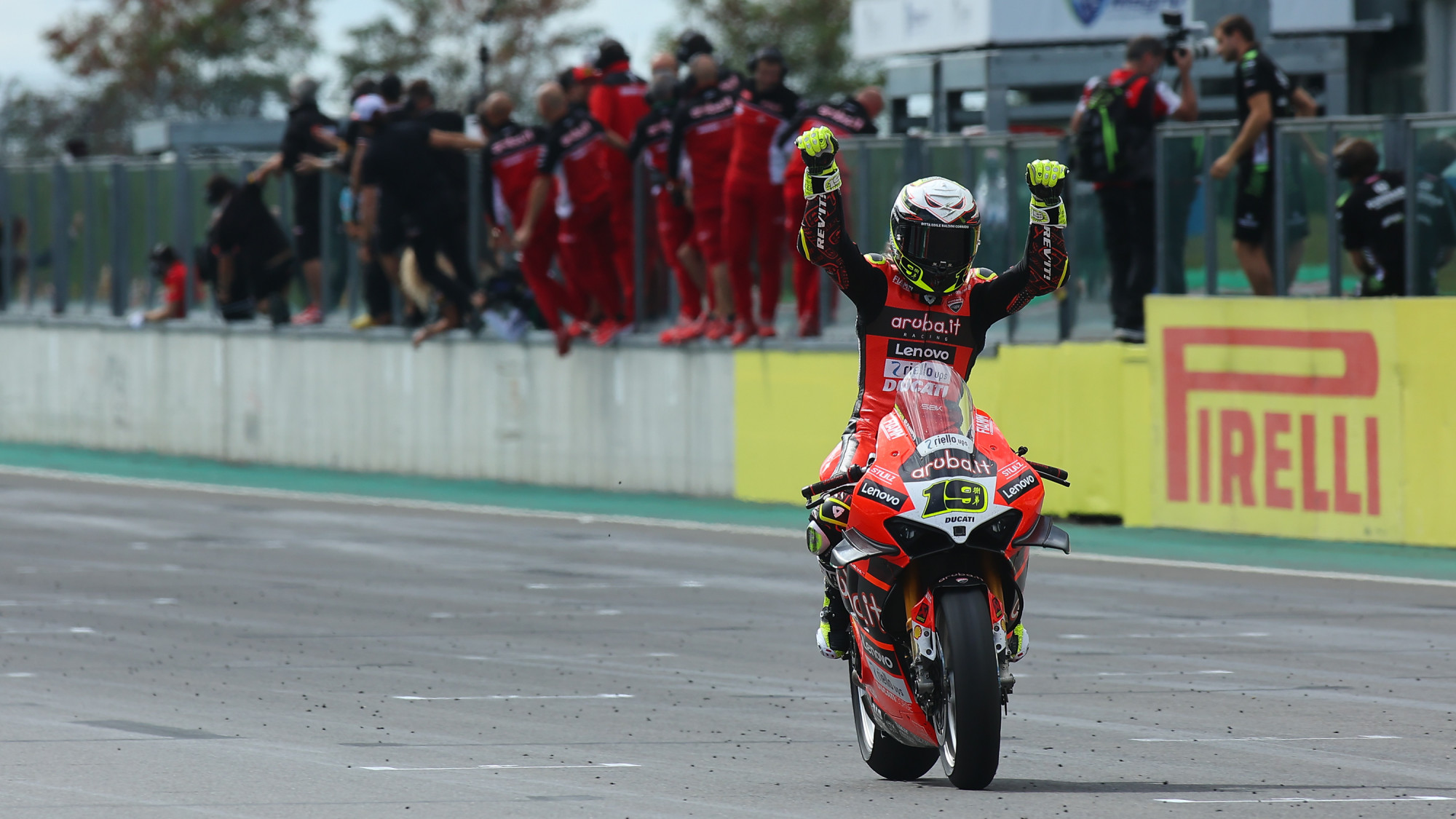 The MOTUL FIM Superbike World Championship raced at the Circuit de Nevers Magny-Cours with a dramatic fight during the Pirelli French Round as Alvaro Bautista (Aruba.it Racing – Ducati) took a stunning victory while his Championship rivals faltered in the early stages of the race. Both Jonathan Rea (Kawasaki Racing Team WorldSBK) and Toprak Razgatlioglu (Pata Yamaha with Brixx WorldSBK) crashed out in the early stages as the Spanish rider extended his Championship lead by 25 points.

LEADERS CRASH: Rea and Razgatlioglu both go down in the early stages…

Laps 2 and 3 were dramatic for the race as firstly Jonathan Rea (Kawasaki Racing Team WorldSBK) went down on the exit of Turn 17 on Lap 2, with the British rider able to re-join the race. He brought his ZX-10RR machine into the pits but did re-join following this. A lap later, Toprak Razgatlioglu (Pata Yamaha with Brixx WorldSBK) went down at Turn 13. The reigning Champion had a huge moment under braking and was able to save it but had to come off the bike at slow speed to not run into the barrier, with Razgatlioglu able to continue. Razgatlioglu was able to battle back to finishing in 11th place while Rea’s trip through the pit lane put him a lap down. Razgatlioglu’s crash ends a streak of eight consecutive podiums for the reigning Champion, while Rea’s extends a winless run to 10 races; his worst since 2019 when he went 11 races without a win.

That was a BIG DEAL for the championship #FRAWorldSBK pic.twitter.com/1l07Dt6m0u

This allowed Scott Redding (BMW Motorrad WorldSBK Team) and Alvaro Bautista (Aruba.it Racing – Ducati) to battle it out for the lead of the race, with Bautista taking the lead of the race on Lap 7 of 21 on the approach to the Nurburgring chicane. Although Redding was able to stay with him, he was unable to re-pass the Championship leader. Bautista went on to claim his first win at Magny-Cours and extend his Championship lead to over 50 points once again in 2022 with Redding in second, his best result with BMW. Bautista took his 24th win, putting him level with 2011 Champion Carlos Checa and 2021 Champion Razgatlioglu while Redding took his 40th podium, putting him level with Doug Polen and Michael van der Mark (BMW Motorrad WorldSBK Team).

BASSANI ON THE PODIUM: fending off the challenge from Rinaldi…

Third place went to Axel Bassani (Motocorsa Racing) as he benefitted from Rea, Razgatlioglu and Loris Baz (Bonovo Action BMW) going down, with Baz crashing at Turn 13 but re-joining. He did have a battle with Michael Ruben Rinaldi (Aruba.it Racing – Ducati), with Rinaldi barging his way through on Lap 12, but when he went through the gravel on the exit of Turn 1 and through Turn 2 on Lap 14, Bassani was able to take third place and claim his second WorldSBK podium.

A fantastic ride by Bassani to take his first podium of the season! #FRAWorldSBK pic.twitter.com/wyTCFqTtyt

It had looked like Garrett Gerloff (GYTR GRT Yamaha WorldSBK Team) would challenge for a podium but as the race progressed, with Gerloff running Pirelli’s new development soft front tyre, he dropped back with Alex Lowes (Kawasaki Racing Team WorldSBK) claiming fourth spot ahead of Gerloff in fifth. Rinaldi was able to respond to his trip through the gravel, battling back from the lower end of the points-scoring places to take sixth place.

IN THE TOP TEN: moving up through the field

Andrea Locatelli (Pata Yamaha with Brixx WorldSBK) took advantage of both Team HRC machines losing pace in the closing stages of the race to finish in seventh place, with Philipp Oettl (Team Goeleven) in eighth place. Iker Lecuona (Team HRC), one of a handful of riders to use Pirelli’s new soft front tyre, finished in ninth having been inside the top ten, with French rider Lucas Mahias (Kawasaki Puccetti Racing) rounding out the top ten.

Razgatlioglu finishing in 11th place and only three seconds away from a top ten spot despite losing around 25 seconds following his crash, after a battle with former teammate Michael van der Mark (BMW Motorrad WorldSBK Team). The Dutchman scored points on his return from injury as he took home 12th place after the pair took advantage of Xavi Vierge (Team HRC) running wide at Turn 5 in the closing stages. Vierge finished in 13th place ahead of Baz in 14th and Luca Bernardi (BARNI Spark Racing Team) in 15th with the Sammarinese rider taking home the last point from Race 1.

NO RETIREMENTS: all 24 riders finish the race

Despite numerous incidents throughout the race, all 24 riders who started finished Race 1. Christophe Ponsson (Gil Motor Sport-Yamaha) was 16th and just 2.5 seconds away from a point, although he did have to fend off Kohta Nozane (GYTR GRT Yamaha WorldSBK Team) in 17th; the pair were separated by just a tenth at the end of the race. Eugene Laverty (Bonovo Action BMW) was 18th with Roberto Tamburini (Yamaha Motoxracing WorldSBK Team) 19th and Malaysian rider Hafizh Syahrin (MIE Racing Honda Team) completing the top 20. Leandro Mercado (MIE Racing Honda Team), Oliver Konig (Orelac Racing VerdNatura). Oscar Gutierrez (TPR Team Pedercini Racing) and Rea were the final four riders in the classification.

Watch all the action from France on 09:00am Local Time (GMT+2) on Sunday using the WorldSBK VideoPass! 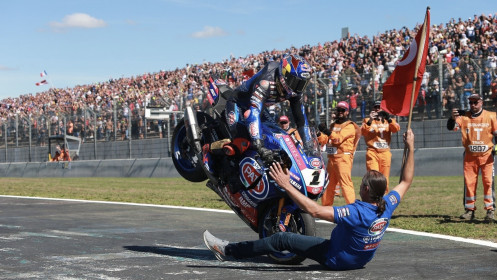 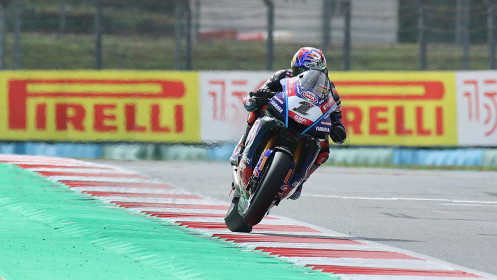 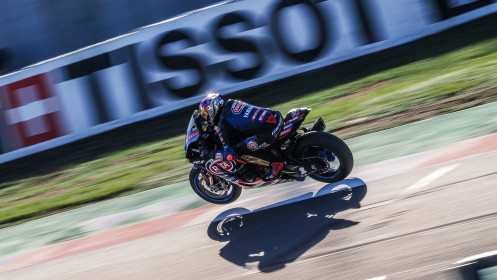