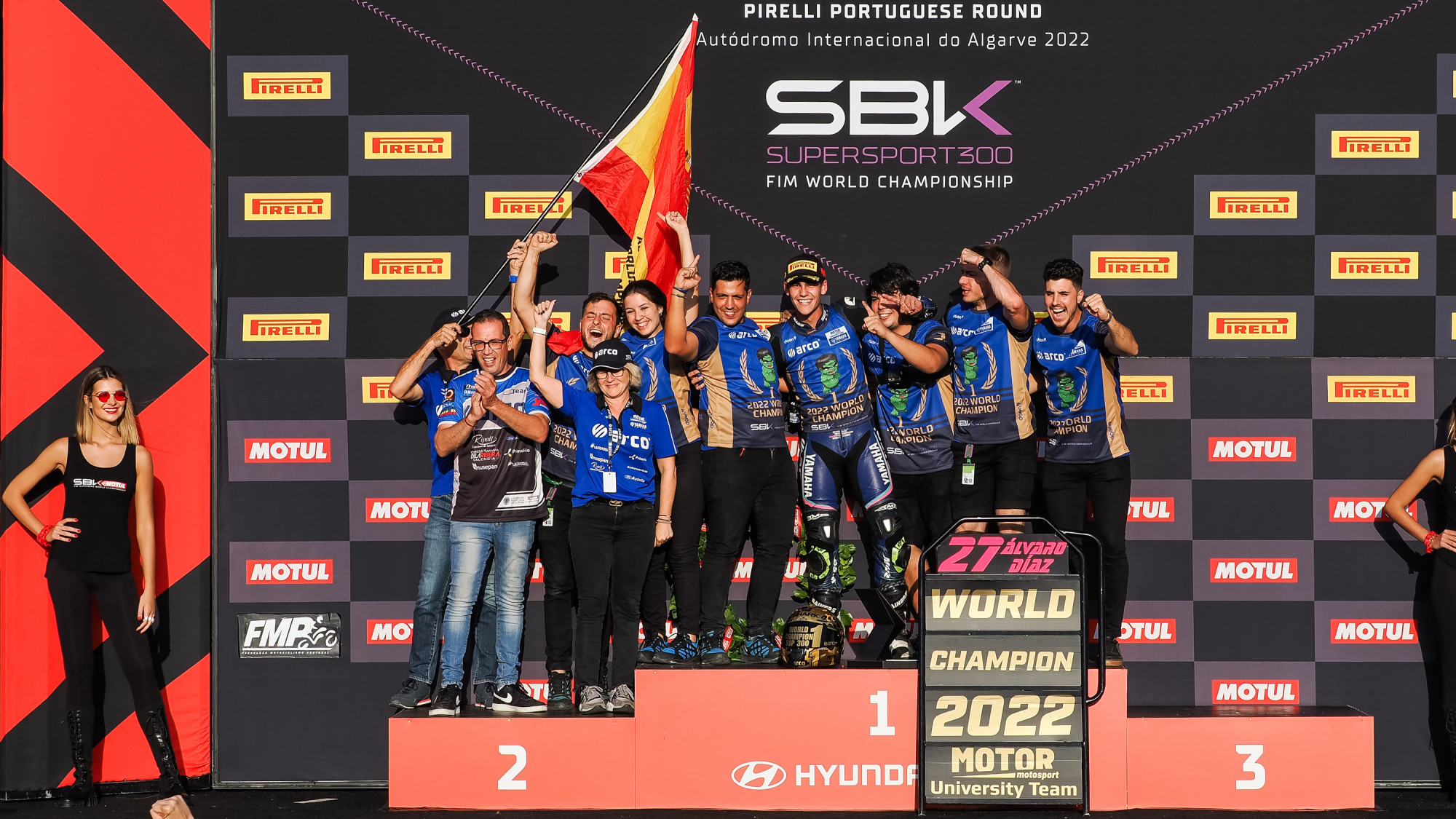 The triumph of the Valencian rider in WorldSSP300 is the culmination of a project born from a slightly unexpected collaboration: a group of young engineers, a university and an industrial valve factory

After a brilliant campaign and with hardly any hesitation or failure, Alvaro Diaz is the new World Champion in the FIM Supersport 300 World Championship, a success that has been crucially supported by the work of the Arco Motor University Team. The history of the team is certainly different from other World Championship teams, since it was born six years ago from the project of a group of engineering students at the Polytechnic University of Valencia. The team’s evolution to the current structure, now among the elite in WorldSSP300, is a story of hard work, blind faith in one rider and amazing professional synergies.

The name of the team already gives all the clues about the relationships that form the Arco Motor University Team. The team’s headquarters and operations base are located in one of the two Arco Valves warehouses, an industrial company from Valencia that specializes in the design and manufacturing of water, gas and heating installation systems. Directed by the Ferrer family, Arco’s collaboration has been one of the mainstays in the team’s growing since it is there that they manufacture the designs and parks the team later tests on their bikes.

Another mainstay has been the agreement with the Polytechnic University of Valencia, where members of the team were trained and where there is a second logistics headquarters. The facilities, used within the framework of a project for developing young talent, is where the designs that reach the YZF-R3 that Diaz rides are born.

FROM THE UNIVERSITY TO THE TRACK: success from the start

How was this particular dynamic created? Antonio Molina, a forestry engineer and currently Team Manager, and in charge of the team’s sports area, explains: “When the project started, in 2017, most of us were still finishing our degrees. We were a group of engineering students at the Valencia Polytechnic. We were doing the project of manufacturing a prototype Moto3™ machine, to compete in a university competition. At that time, WorldSSP300 was created and we thought that, even if there were teams with more experience than us, it could help us to learn quickly and compete with greater equality.”

That being said, the team entered the Spanish Supersport 300 championship with Samuel Di Sora as the main rider and with Molina himself, who had competed in amateur events, as the second rider. “I was like a guinea pig, testing the pieces that were later passed on to the riders,” recalls the Team Manager. It was a success at first, since they took the 2017 title with Di Sora; the Frenchman is now one of the leading figures in WorldSSP300. This success encouraged them to continue forward. Molina added: “That year, we saw where that category was going and we welcomed a very young rider, Alvaro Diaz, who was 14 years old and had just raced with Aspar, although he hadn’t fit in there. We bet on him, going year after year.”

BUILDING A WINNING PROJECT: the rise of Diaz

While Diaz was gaining experience in the Spanish championship, in the 2018 and 2019 campaigns, the team intensified its technical preparation through an agreement with the PCO Motor Laboratory and Yamaha, in order to develop the bikes on their own. On track, the Kawasaki machine had reigned for several years and was very difficult to beat. Molina said: “The Ninja 400 has been the big drama for all the Yamaha teams. In 2017, Marc Garcia and Yamaha won, but against the Ninja 300. The entry of the Ninja 400 forced us to do engineering and R&D work to be able to live up to it and have competitive motorcycles.”

In 2020, the team joined the Motoxracing Yamaha WorldSSP300 as part of their technical staff for a year, renouncing emoluments, so that Alvaro Diaz could race in the World Championship while they also managed the Yamahas of Bahattin Sofuoglu, now a rider fighting for the top-ten in WorldSSP, and Poland’s Daniel Blin.

“It was the year of Covid, and with the nerves of the first year in the category, it did not go well in terms of results for Alvaro,” explains Molina. “In order not to leave him in the lurch, we decided to give him one last year, in the 2021 Spanish championship, and we proposed that if he won it, he would return to the World Championship the following year. And he won it, even thought it was a very close season.”

What happened next in the successful 2022 campaign is now history. The 19-year-old rider has established himself throughout the season as one of the undisputed talents of his generation, and with a promising future ahead of him.

WHAT’S NEXT: a jump to WorldSSP and a WorldSSP300 title defence?

After winning the WorldSSP300 crown, the Arco Motor University Team is already planning their next move on the world stage, which includes defending the title and, in parallel, moving into World Supersport. “It is certain that we will have a team in WorldSSP300,” explains the Team Manager. “We are looking at whether it is with two riders, it is not certain yet. One of them could be Unai Calatayud, and we would like to have another rider with international projection. We have to talk about it with Yamaha. Our goal is to fight, year after year, to win this Championship.”

It would also be the time to make the leap to WorldSSP and they do it together with their new WorldSSP300 Champion. “Because of the places available, we still don’t know if it will be with our team or in collaboration with another team. We are in talks with Motoxracing to establish a collaboration with them, perhaps integrating our technical into their structure,” explains Molina. “Alvaro’s dream is to continue in this sport, to compete in WorldSSP with a Yamaha, with an official motorcycle to be able to fight and he would like to do it with the people who have taken him there and who have bet on him. After winning the Spanish championship and now the World Championship, I think he will have earned the right to be bet on him.”

WHO’S WHO: the team behind the team

Last but not least, who are the people who helped the team to their success. It would not be fair to not mention the group of engineers that make up the team’s staff, most of whom have graduated in the last three years. In addition to Molina, Carlos Zafra, a mechanical engineer, has been the technical director since the beginning and is in charge of the designs and production of parts. Javier Varneto, an industrial engineer, deals with telemetry while Juan Ferrandiz is a mechanical engineering and acts as chief mechanic. Miguel Collados is another mechanical engineer and gets his hands dirty as a mechanic. The structure integrates other mechanical engineers, such as Nacho Sanchis and Pablo Culla, since they also compete in the Spanish championship, where they partcipate in both Supersport 300 and Supersport. There is a total of about 12 people, although those who regularly attend the races are the ones listed here.

Congratulate Diaz for his 2022 title using the hashtag #D1AZ and re-watch some of his incredible moments using the WorldSBK VideoPass!