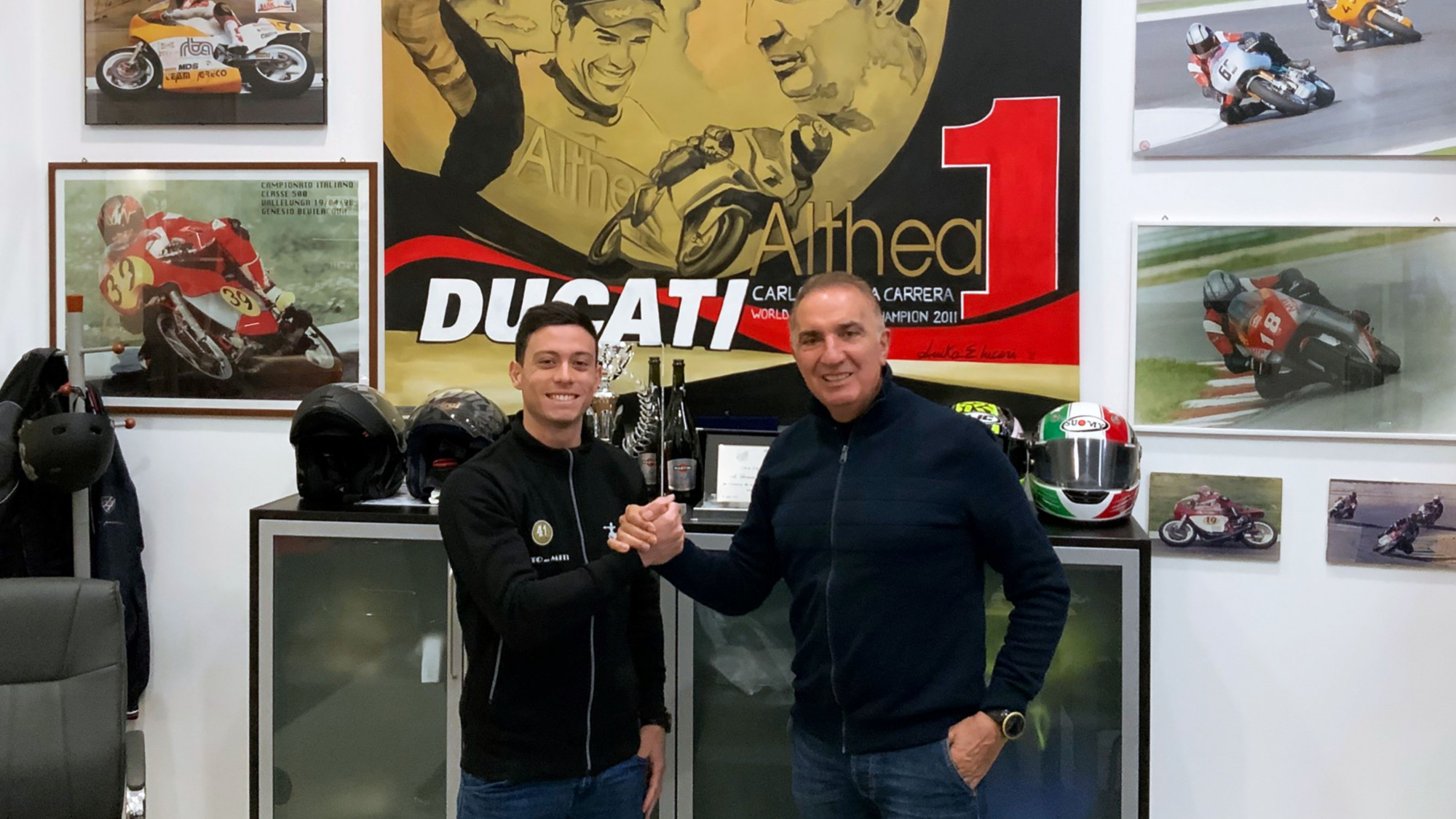 15 years after they debuted in the World Championship full-time, Althea Racing are back with a bang...

Legendary team Althea Racing will be back in the WorldSBK paddock in 2022, as they return to the world stage in the FIM Supersport World Championship. Back with Ducati after what will be seven years, Althea Racing will rekindle their success with Ducati with the V-Twin motorcycle and Italian star Federico Caricasulo, who was runner-up in the Championship back in 2019 as well as a podium-finisher in 2021. It will be Caricasulo’s first venture with Ducati.

Althea Racing first came into the WorldSBK paddock in 2007 with Katsuaki Fujiwara and Lorenzo Alfonsi in WorldSSP, before moving into the World Superbike with Roberto Rolfo in 2008, remaining with Honda machinery. However, they’d switch to Ducati in 2010 and in the same year, Carlos Checa would give them their first win, in just their second race with Ducati. After a successful season saw them win two more races and finish third in the Championship, the team and Checa dominated in 2011, with an astonishing 15 wins, clinching the title by an incredible 110 points. More wins followed in 2012 with Ducati, before the team had a year with Aprilia.

After little success, 2014 saw them back with Ducati in the Evo class, finishing in the top ten on numerous occasions. 2015 welcomed Matteo Baiocco and 2011 125cc World Champion Nico Terol and top six finishes were bagged. From 2016 to 2018, the team were on BMW machinery and saw Jordi Torres, Markus Reiterberger and Loris Baz all take top six results as the lead BMW team. For 2019, they joined forces with MIE and the Moriwaki Honda set-up, where they were in the top ten on numerous occasions, before they left the paddock in 2020. However, after just a year away, Genesio Bevilacqua’s squad are back in World Championship competition.

Speaking about his new deal and a new challenge, Federico Caricasulo said: “I’m really happy with the opportunity that Genesio is offering me. It was an unexpected proposal that I accepted immediately because it is a winning project with a team that certainly needs no introduction, and that I also followed as a fan. I like the idea of being the only rider in the team and I think it's the best situation to aim for certain results. After five years with Yamaha in which I believe I have grown a lot, it’s important for me to accept a new challenge that gives me the best motivation. I still have an unfinished business with this category since 2019 and my only goal is to improve the results I have already achieved.”

Bevilacqua’s team have featured in other classes in WorldSBK, with them making their debut in 2007, with Katsuaki Fujiwara taking the team’s first podium in the first race of the year in World Supersport. The team stayed there until the end of 2009, also taking a podium with Australia’s Mark Aitchison. In 2011, they won the FIM European Superstock 1000 title with Davide Guigliano before he graduated to WorldSBK and took podiums in 2012, whilst in 2016, the team took the STK1000 crown again, this time with BMW machinery and Raffaele De Rosa, who went on to achieve top ten finishes for the team in 2017 in WorldSBK.

Speaking about his return to World Championship action, team principal Genesio Bevilacqua said: “Althea did not need to return but I chose to do so because I believe that this Supersport is the category of the future. There are all the prerequisites for what our only aspiration has always been: to win by using our experience and our skills by racing with the best. This Supersport and its new regulations are truly an opportunity; competition is in our DNA and that's why we want to be there."

The team’s return to WorldSSP also enhances Ducati’s presence on the grid for 2022, with them becoming the fourth team to enter the class with the Italian manufacturer. Caricasulo is also the 11th rider confirmed on the 2022 grid, one of just three riders thus far who isn’t a rookie after Dominique Aegerter (Ten Kate Racing Yamaha) and Can Öncü (Kawasaki Puccetti Racing).

Find out how Althea Racing get on in WorldSSP with the 2022 WorldSBK VideoPass!