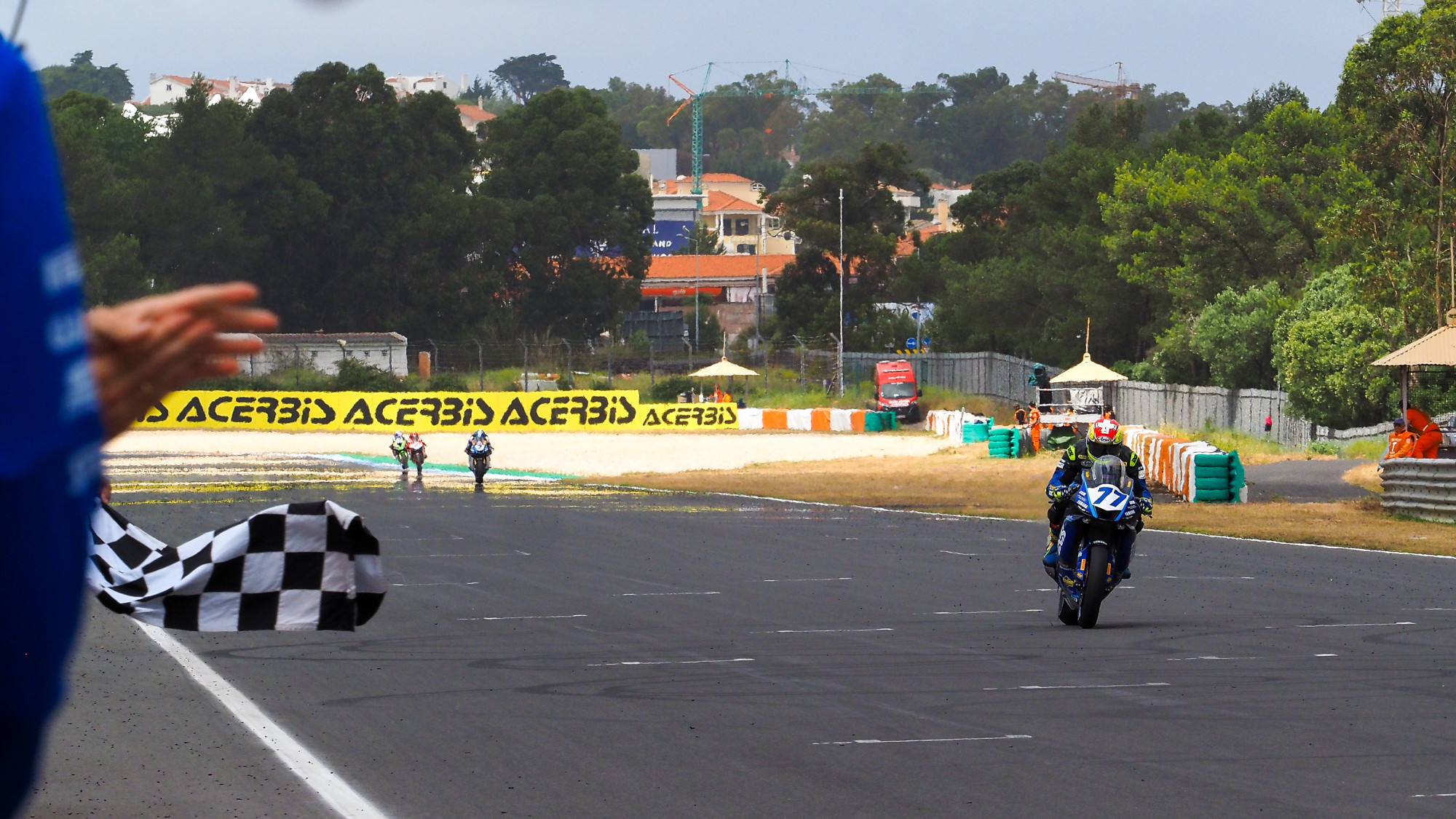 Saturday’s action at the Circuito Estoril came to a dramatic conclusion with Race 1 for the FIM Supersport World Championship with Dominique Aegerter (Ten Kate Racing Yamaha) claiming his fourth consecutive victory. The reigning Champion had to battle back after losing ground at the start of the race before going on to claim victory by around three seconds to extend his Championship lead.

FIGHTING BACK: Aegerter drops back but claims victory

Aegerter dropped back at the start of the race to lose ground to Jules Cluzel (GMT94 Yamaha) and Nicolo Bulega (Aruba.it Racing WorldSSP Team) with the Italian rider taking the lead through Turn 1. A mistake from Bulega at Turn 6 dropped him down to fifth place on the opening lap while Can Oncu (Kawasaki Puccetti Racing) was the big mover over the opening two laps, first gaining from eighth before overtaking two riders at Turn 1 at the start of Lap 2.

It wouldn’t be until Lap 8 that Aegerter would take the lead of the race as he took advantage of Glenn van Straalen (EAB Racing Team) and Oncu battling for the lead to pass the pair into Turn 1, and from there the reigning Champion did not look back as he went on to claim his fourth win of the 2022 season by more than three seconds ahead of Lorenzo Baldassarri (Evan Bros. WorldSSP Yamaha Team) who also had to battle back after losing out at the start. Oncu ran in third place until the final lap before Bulega made his move at Turn 1 on the Turkish star for the final podium place, with Oncu coming home in fourth place.

Victory for Aegerter means he now has 14 wins in WorldSSP and 21 podiums, putting him level at tenth in the all-time list with Stephane Chambon, Kevin Curtain and Katsuaki Fujiwara. Baldassarri’s second place gave him his fourth podium of this rookie season and he also claimed Italy’s 120th podium in WorldSSP while Bulega made it three podiums in 2022 after a strong start to his rookie campaign.

THRILLS AND SPILLS: drama in the top ten

Federico Caricasulo (Althea Ducati) has shown strong pace at Estoril in WorldSSP in both 2021 and 2022 and continued that with fifth place in Race 1 as he finished ahead of Yari Montella (Kawasaki Puccetti Racing) with the Italian taking his best result of 2022 and his equal-best in his WorldSSP career. Van Straalen had been applying pressure to race winner Aegerter after the reigning Champion made his move, but a crash at Turn 9 dropped him down the order. Despite this, the Dutchman battled back to claim seventh spot after losing 13 seconds with the crash.

Reigning WorldSSP300 Champion Adrian Huertas (MTM Kawasaki) continued his strong start to the season with a career-best eighth with Andy Verdoia (GMT94 Yamaha) in ninth. Verdoia lost ground in the opening stages of the race but was able to stabilise the losses before claiming a season-best result. The youngest rider on the grid, Ondrej Vostatek (MS Racing Yamaha WorldSSP), claimed his best result of his WorldSSP grid with a top ten finish.

Kyle Smith (VFT Racing) was involved in the battle for a top-ten finish but had to settle for 11th ahead of Oli Bayliss (BARNI Spark Racing Team) in 12th. Bayliss had shown strong pace in the closing stages of the race but was unable to move himself into the top ten, finishing in 12th. Simon Jespersen (Kallio Racing) received a late call-up to race this weekend and battled his way up to 13th place, ahead of Leonardo Taccini (Ten Kate Racing Yamaha) and Marcel Brenner (VFT Racing) as the Swiss rider rounded out the points with 15th place.

Tom Edwards (Yart – Yamaha WorldSSP) battled back from a Lap 3, Turn 9 crash to finish in 18th place on his second wildcard event, finishing behind Unai Orradre (MS Racing Yamaha WorldSSP) and ahead of Sander Kroeze (Kallio Racing). Luca Ottaviani (Altogo Racing Team) was 21st after serving a Long Lap Penalty in the race, ahead of Raffaele De Rosa (Orelac Racing VerdNatura WorldSSP) with a 12-second gap; De Rosa had to take a double Long Lap Penalty and was then served with a Ride Through Penalty for not completing his Long Lap Penalties. After gaining positions in the final stages of the race, Bahattin Sofuoglu (MV Agusta Reparto Corse) crashed at Turn 9 and re-joined, finishing in 23rd ahead of Peter Sebestyen (Evan Bros. WorldSSP Yamaha Team) who had a Turn 6 crash on the opening lap.

Stefano Manzi (Dynavolt Triumph) did not take part in the race after he suffered a technical issue on the sighting lap, with the Italian rookie unable to take his place on the starting grid. It was a double retirement for the Dynavolt Triumph squad after Hannes Soomer retired following a Turn 3 crash on Lap 5. Niki Tuuli (MV Agusta Reparto Corse) had been running inside the top ten but a crash at Turn 4 on Lap 10 forced the Finn out of the race. On the same lap, Jules Cluzel (GMT94 Yamaha) had a crash at Turn 1 which put him out of the race, while Ben Currie (Motozoo Racing by Puccetti) brought his bike into the pits. Maximilian Kofler (CM Racing) was another retirement from the race after completing 14 laps.

Watch WorldSBK on Sunday starting from Warm Up at 09:25 Local Time (GMT+1) live and uninterrupted using the WorldSBK VideoPass! 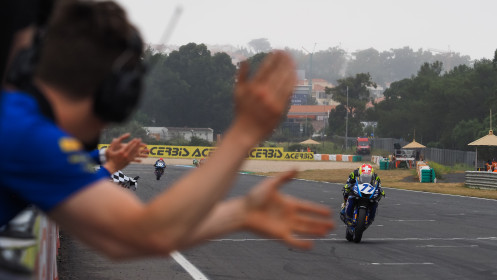 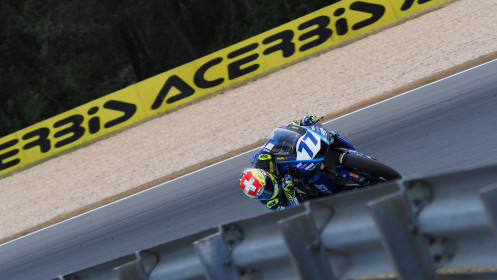 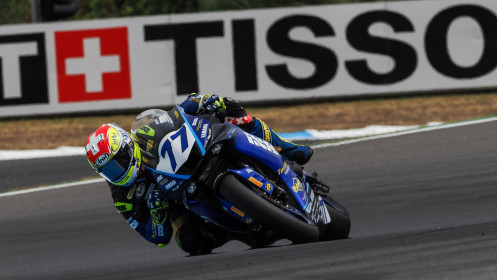