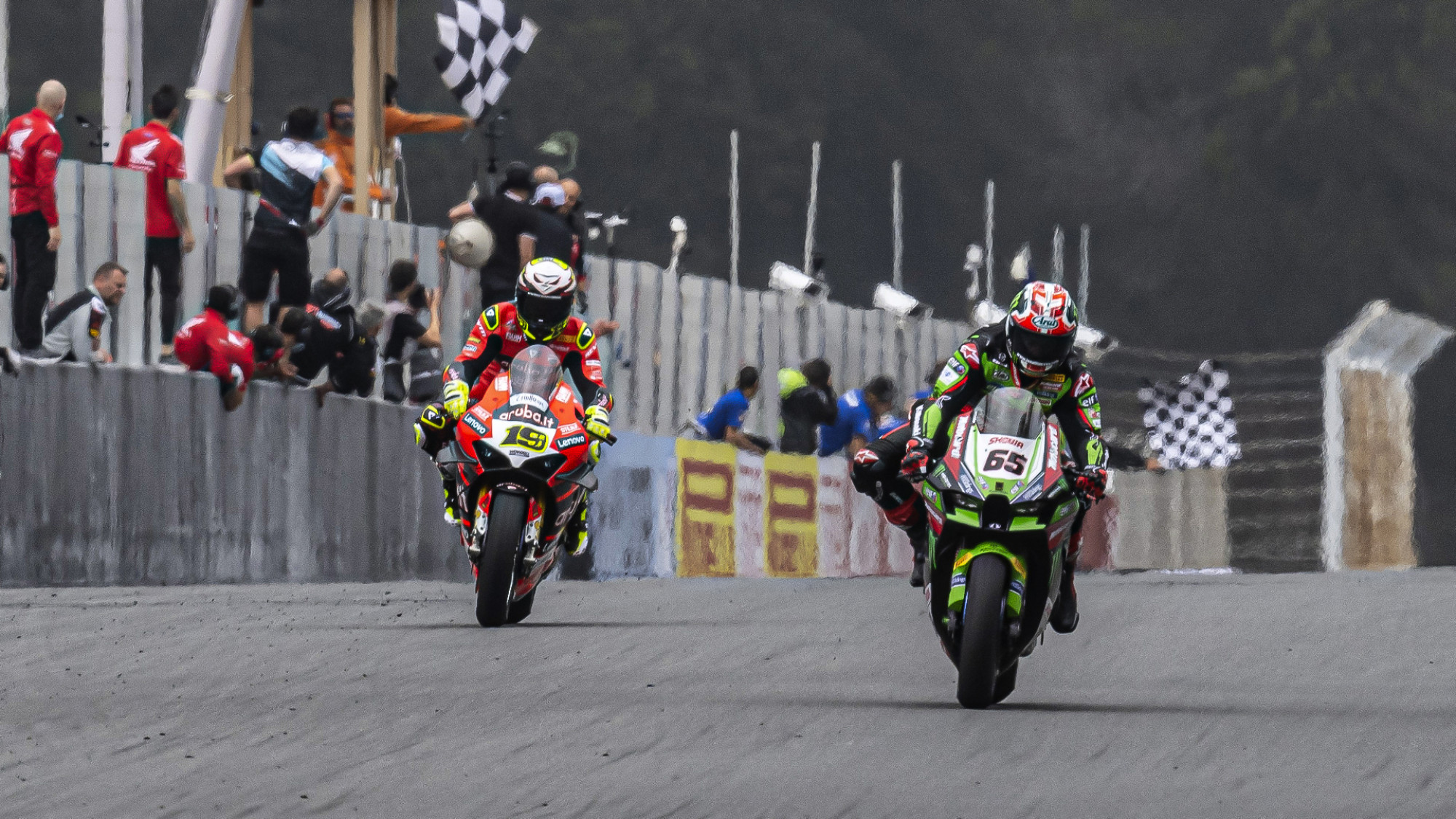 Against the odds and despite a huge last corner slide, Jonathan Rea clung on to a Race 2 win at Estoril against the power of Ducati and Bautista – but how?

The thrilling 2022 MOTUL FIM Superbike World Championship saw one of the biggest battles of the season in Race 2 between Jonathan Rea (Kawasaki Racing Team WorldSBK) and Alvaro Bautista (Aruba.it Racing – Ducati). Rea and Bautista swapped places multiple times on the final lap for the lead in a race which went down until the final chicane. It was Rea who came out on top this time, whilst Championship leader Bautista couldn’t overhaul the Ulsterman. However, given one of Ducati’s big strengths is top speed, just how did Jonathan Rea – with a massive rear-end slide on the exit of Turn 13 on the final lap – manage to fend off his title rival?

Talking about the last lap in detail, Rea spoke in detail about the battle to come: “It was exciting from my place! With three or four to go, I made a small mistake and then on the penultimate lap, I was quite strong and able to recover everything. Going on to the last lap, I got a good traction coming off the final corner; I used the slipstream and then said, ‘just brake, don’t mess up’. So, I focused on four because he was braking early into Turn 6. Then, I saw how fast he was from Turn 4 and through Turn 5, I thought, ‘no way’! I released the brake, used the corner speed, picked the bike up and the traction I had was really good.

“This was my chance, so I went! I had two or three opportunities: Turn 7, Turn 9 where I passed or the cutback on the final corner, I thought I had enough edge grip so that I could go inside. I felt the earlier in the lap that I did it, the more I could gain track time for the long straight. I tried at Turn 7 but he cut back, so I parked it on the apex at Turn 9 and just stopped him a little bit from dropping on top of me, then I did my line and made a good exit. I thought I f****d it to be honest because I had such a big slide, so I thought he was going to do me on the line, but eventually, I was able to get the job done. It’s nice when a last lap goes your way!”

When asked if it was a ‘win it or bin it’ final lap, Rea denied it, saying that he was always in control: “I was always in control, I knew for example that at Turn 7, it was going to be a really simple block pass. I didn’t need any trail braking, as I just went straight. Then at the chicane, I went around the outside. The only way it could’ve been a disaster is if he completely shut the door and went to the apex, but he left enough space for me to put my bike inside. We had great feedback from the bike today, the ZX-10RR has been working well. I never thought about the gravel, it wasn’t a decision I made!”

ANALYSIS: how speed impacted the result

Throughout the weekend, the Kawasaki hasn’t quite had the top speed of the Ducati; the biggest difference was in Race 1, when the ZX-10RR’s top speed with Rea was 313.9km/h, whilst Bautista’s was 324.3km/h, a difference of 10.4km/h, although it’s not possible to tell whether slipstreams were involved in either, as well as other variables such as tailwinds. However, in Race 2, the top speed of the Kawasaki was 317.6km/h, and whilst Ducati and Bautista’s had also increased to 325.3km/h, the difference was reduced.

On the contrary, Bautista was able to out-drag Toprak Razgatlioglu (Pata Yamaha with Brixx WorldSBK) to the line on the final lap of Race 1; his 324.3km/h top speed was recorded in the first half of the race but even at 314.9km/h going onto the last lap, he was still 9km/h faster. Two and a half tenths faster on the last lap than Toprak, Bautista could overhaul the Yamaha; so why not the Kawasaki, which also had a huge slide?

On the final lap, the sectors tell the story; Rea set his fastest first sector of the race on Lap 21 and was faster than Bautista in sector three and four. Only in sector two, where Bautista could lead out of Turn 4 and carry the speed down the backstraight, was the Spaniard quicker. In the final sector, Rea was nearly three tenths quicker than Bautista, as he put the hammer down, which takes into account the massive slide he had on the exit. Bautista’s top speed onto the straight was still faster, but not enough to catch Rea, who did a 1’37.693 on the final lap compared to Bautista’s 1’38.044.

BAUTISTA BOWLED OVER IN BATTLE: “I expected him to attack!”

Speaking about the final lap from his perspective, Bautista cited rain in the final sector: “In the last overtake, I lost the line because I closed the door and then he opened it! I had to pick up and I lost more than with Toprak yesterday in the exit. In the last lap, the light rain which had been there all the race was a bit harder. This time I didn’t win, but I am happy because I felt better than this morning. I battled with the others, braking hard, so I’m happy with this.

“I expected him to attack! In Turn 7, he tried to pass but I was prepared. In the chicane, I knew he would try but I defended, leaving only a few metres between the inside kerb and me but he just put the bike inside. It’s difficult to defend that corner more than I did. It’s also difficult to recover the position because it’s very close to the next corner and you don’t have space. I tried to defend, and, in the end, I can’t defend it and he gains it very well. From Turn 8 until Turn 12, I lost a lot compared to Jonny and Toprak, but I can’t improve a lot there because my bike is strong in another point. In a slow sector, we aren’t so strong.”

The fact is that after not having a last lap battle between Rea and Bautista in 2019, we have had three last lap fights for victory in 2022 from the opening nine races between them: Race 1 at Aragon, Superpole Race at Assen and Race 2 at Estoril. All three circuits have gone the way of Rea thus far but with these two, plus Toprak Razgatlioglu in this mix at every round and in every race, the season will have plenty more battles to come. Top speed won’t be key at all, such as the next two rounds at Misano and Donington Park, but agility, hard braking, patience, strategy and determination will always be a part. Who knows which was the season will go?

Watch all of 2022 and never miss a pass with the WorldSBK VideoPass!