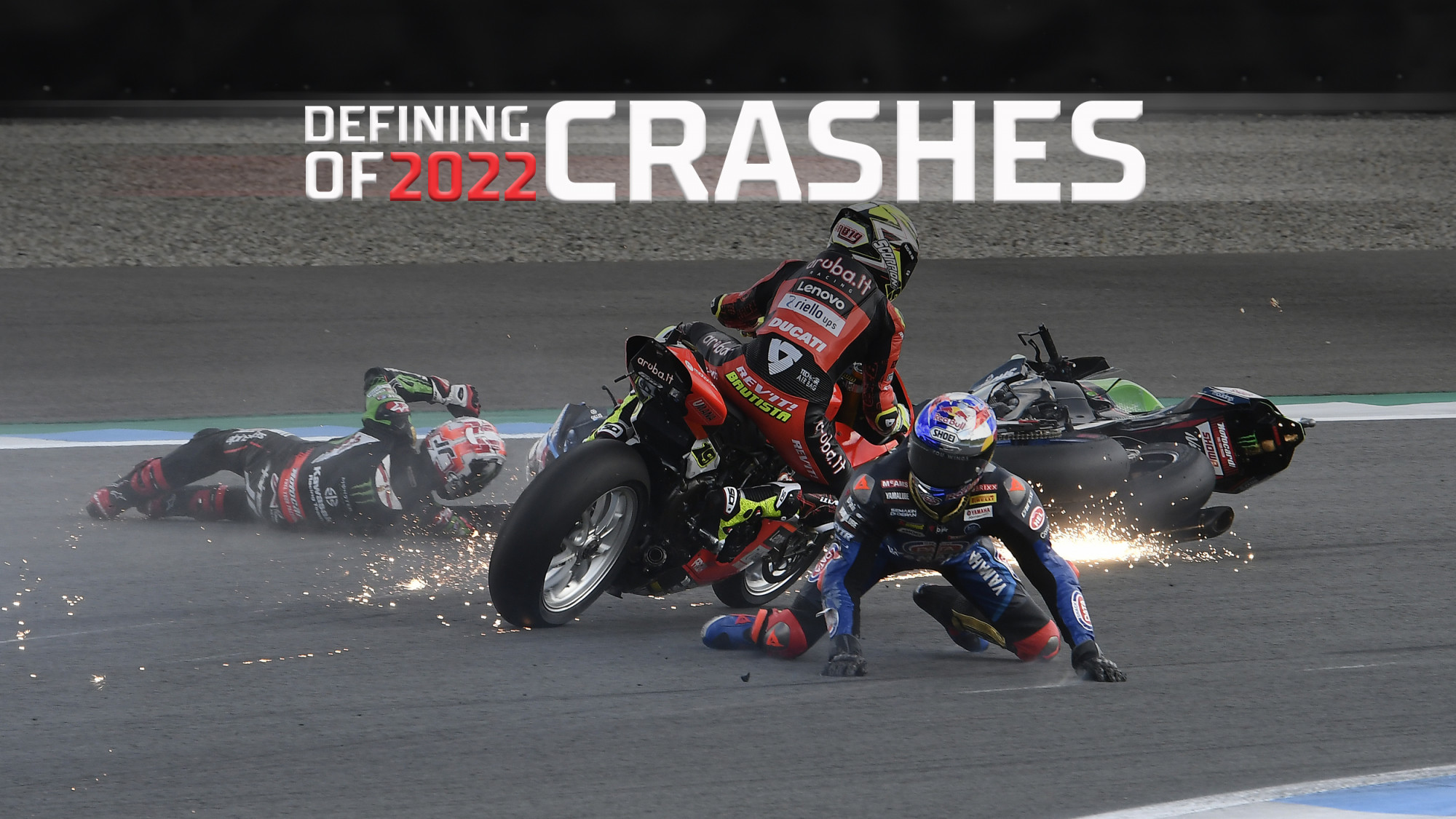 There was plenty of drama throughout the 2022 season across all classes, including plenty of spills for riders up and down the grid…

The 2022 MOTUL FIM Superbike World Championship was full of drama throughout the 12 rounds that made up the 2022 season, with last-lap fights, incredible fights as well as crashes throughout the season which proved pivotal in the title battle. With all the data reviewed, take a look at some of the key information coming from the annual falls report for this season including the circuit and turn there were more crashes at and the rider who crashed the most.

Loris Baz (Bonovo Action BMW) was the rider who had the most crashes throughout 2022 as he went down 11 times. Baz was the only rider to have crash numbers in double figures, with Kohta Nozane (GYTR GRT Yamaha WorldSBK Team) in second place on nine and Iker Lecuona (Team HRC) and Michael van der Mark (BMW Motorrad WorldSBK Team) in third on seven each, despite the Dutchman missing most of the first half of the season through injuries. In terms of full-time riders, Axel Bassani (Motocorsa Racing) had the fewest crashes this season (out of those who did crash) with one.

In terms of the ‘Titanic Trio’, Alvaro Bautista (Aruba.it Racing – Ducati) crashed the most in 2022 with five falls. 2021 Champion Toprak Razgatlioglu (Pata Yamaha with Brixx WorldSBK) and Jonathan Rea (Kawasaki Racing Team WorldSBK) both had three each throughout the season, tying for seventh spot in terms of number of crashes. Bautista was in fifth place in the list of crashes for the season.

In WorldSSP, Yari Montella, racing for the Kawasaki Puccetti Racing team, crashed the most times with 17 falls throughout his rookie season, closely followed by Glenn van Straalen (EAB Racing Team) in second place with 16 falls. Tom Booth-Amos, who raced for both the Motozoo Racing by Puccetti and Prodina Racing WorldSSP teams, was third with 11 falls throughout his rookie campaign. Of all the full-time riders, Ondrej Vostatek (MS Racing Yamaha WorldSSP) and Filippo Fuligni (D34G Racing) had the fewest crashes with one each.

Ruben Bijman, racing for MTM Kawasaki, had 10 crashes in WorldSSP300’s eight rounds in 2022, putting him at the top of the list. Harry Khouri (Fusport – RT Motorsports by SKM – Kawasaki) was second with eight falls while three riders were in third place. Inigo Iglesias (SMW Racing), Kevin Sabatucci (Kawasaki GP Project) and Fenton Seabright (Vinales Racing Team) all had seven crashes in 2022. Out of the full-time riders who crashed, Marc Garcia (Yamaha MS Racing), Daniel Mogeda (Team#109 Kawasaki) and Indy Offer (Team BrCorse) had the fewest with one each.

The round with the most crashes was the Emilia-Romagna Round at the Misano World Circuit “Marco Simoncelli”, with 61 crashes across all three classes. The Estoril Round was in second place with 58 crashes while the Dutch Round at the iconic TT Circuit Assen had 56. By class, WorldSBK had more crashes at the Circuito Estoril than any other circuit with 31, WorldSSP had 17 at the Circuit de Nevers Magny-Cours and WorldSSP300 had 24 at both the TT Circuit Assen and Misano. The Argentinean Round once again featured the fewest falls with 15 across WorldSBK and WorldSSP.

Individual corners also cause problems for riders and the corner with the most crashes this year, across all three classes, was the Turn 5 hairpin at Magny-Cours which featured 15 crashes across the weekend. Three corners had 14 crashes at, with Turn 1 at Estoril, Turn 4 at Misano and Turn 1 at the Autodrom Most all featuring high up the list.

As always, we would like to send our thanks to every single Marshal, whose invaluable support throughout 2022 helps keep our races and our riders as safe as possible. Without them, we would not be able to enjoy the sport we all love every year.

Total crashes for WorldSBK riders in 2022 (wildcards and replacement riders not included):

Relive an incredible 2022 season and get set for 2023 using the WorldSBK VideoPass!