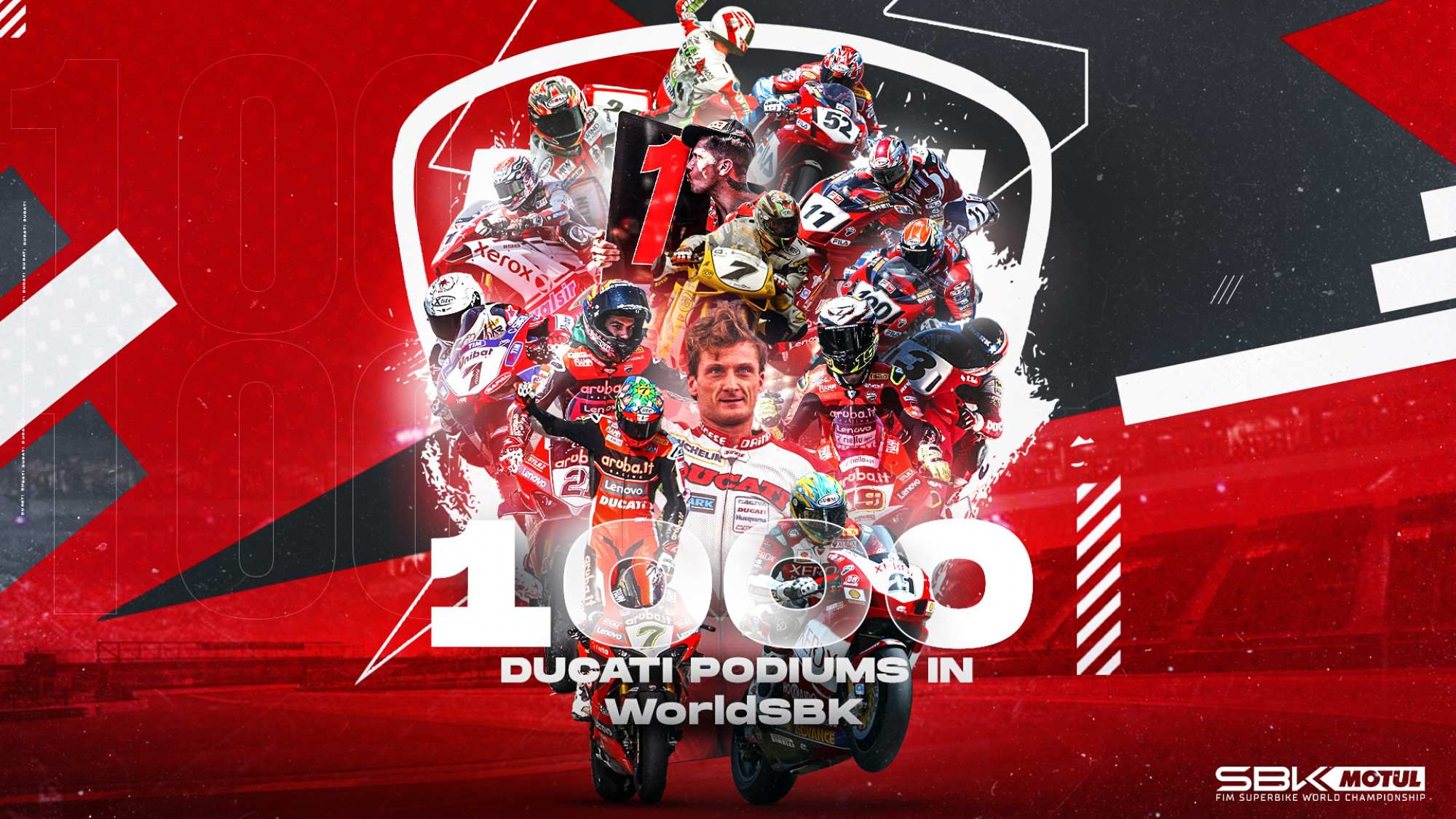 Ducati have snatched a 1000th podium in WorldSBK, a true giant of the sport and destined for more

In 1988, the FIM Superbike World Championship was born and sweeping to success in just the first race, 1981 500cc World Champion Marco Lucchinelli for the Ducati Team Lucky outfit. A fine second place finish would be the first podium for Ducati; he’d go on to win Race 2, the first of two WorldSBK wins. However, that first race podium on a chilly Sunday morning at Donington Park was just the start. 34 years later, another iconic milestone in the Bologna manufacturer’s history – 1000 podiums. Unrivalled success, unparalleled history and an unthinkable achievement, and more to come.

EARLY START: on the box from Race 1

Despite initial success, Ducati’s only representative in 1988 would be Lucchinelli and the promised potential wouldn’t come to fruition. Two wins, two more podiums and fifth overall, Ducati were beaten by Honda to the title and were behind Italian rivals Bimota. 1989 was better; Lucchinelli, now team manager, oversaw Raymond Roche’s entry to the Championship, with the Frenchman winning races and finishing third. By the end of the 80s, Ducati had 16 podiums, seven wins, but no title.

GOLDEN ERA: Ducati storm to success in the 90s

However, as the 1990s kicked in, so did Ducati’s dominance – taking the title by 57 points, Roche was able to put the Italian marque on the map in 1990 and whilst he battled hard in 1991, ultimately losing his crown to fellow Ducati rider Doug Polen, the manufacturer had accumulated 50 podiums before the end of 1991. With a helping hand from Ducati legend Giancarlo Falappa and Belgian star Stephane Mertens, Ducati were on 100 by the time WorldSBK left Jarama in 1992, the first manufacturer to reach the number, as Polen cruised to the title. In 1993, despite Carl Fogarty and Giancarlo Falappa being the main riders and with them reaching 150 podiums, Kawasaki took the crown back to Japan.

However, the manufacturer’s most successful rider was about to embark on what would make him synonymous with the brand the world over and indeed a sporting hero in his native UK and for Ducati in Italy. Carl Fogarty snapped up the 1994 title in the final race of the season against arch-rival Scott Russell and at the start of the next season, a 1-2 at Hockenheim – ‘Foggy’, followed home by Fabrizio Pirovano – made it 200 podiums, as Ducati eased to another riders’ title with Carl, their fifth one from six. Troy Corser was now a race winner too and going into the 1996 season, with Fogarty at Honda, the Australian was a favourite in just his second year and delivered the crown at home in Race 1 at Phillip Island at the end of the season, whilst Pierfrancesco Chili was the new Italian Ducati hero. Fogarty came back to Ducati in 1997 but couldn’t get the crown, although he did in 1998 and with a third place at Donington Park, gave Ducati their 300th podium.

Making it four riders’ crowns in 1999, Fogarty suffered a career-ending injury in Australia in 2000, but a new era was coming through to maintain ‘King Carl’s’ honour. Troy Bayliss was the main man and whilst he gave Ducati a 375th podium at home at Misano, it was wildcard Steve Hislop who, again at Donington Park, hit the next milestone of 400 podiums whilst Ben Bostrom would go on to win five races on the bounce later in the 2001 season. The title would be returned to Ducati by Bayliss with a 425th podium place for Ducati at Assen in Race 2 and whilst Bayliss may not have been able to take the title in 2002, but 2003 would see the halfway house reached.

In an epic Race 1 at Silverstone, Neil Hodgson won at home but it was James Toseland in second who made it 500 – the United Kingdom holding many milestones for Ducati over the years. The riders’ crown went to Hodgson in 2003, before going to Toseland – against the odds – in 2004, as Noriyuki Haga delivered the 575th podium in – you guessed it – the UK, this time at Brands Hatch. The 600th came close to home with Regis Laconi’s last WorldSBK win at Misano in Race 2, 2005.

After Suzuki took the crown in 2005, Troy Bayliss returned from MotoGP™ and took the title straight back in 2006. His rivalry with James Toseland was now fierce and in 2007, despite winning a classic at Assen in Race 2, the crown went to Honda and Toseland. Bayliss entered 2008 with a point to prove, taking 11 wins and the crown in his final season, including a final win in his last race. The legacy continued in 2009 as Noriyuki Haga and Michel Fabrizio racked up wins and podiums – Fabrizio’s third place at Misano in Race 1 being the 700th podium. Neither could take a crown though and it was Carlos Checa who came good in 2011, clinching Ducati’s last title to-date, as well as the 300th win, coming at Silverstone in Race 1.

MODERN ERA: the title eludes but the stats rack up

Wins came in 2012 but then, it’d be a wait of three years until the next one, which was delivered in style by Chaz Davies at Aragon with the Ducati Panigale. Some of Davies’ most iconic wins came in red, such as his last lap fight at Sepang in Race 2, 2015, denying Jonathan Rea the title in that moment, as well as third at home at Misano bringing them their 800th podium place. In 2016, he’d fight for the title throughout the season, although for a second year, it wasn’t to be. In 2017, Davies was once again battling for the title, but Marco Melandri was also back in the Championship, winning Race 2 at Misano. 2018 would be another race winning season with Davies and Melandri, however a MotoGP™ star would write records in 2019.

Alvaro Bautista’s arrival in WorldSBK was emphatic – 11 straight wins, including a 350th for Ducati at MotorLand Aragon, which also saw the 900th Ducati podium, Bautista was set for success from the start. The title missed Bologna again and with Bautista leaving at the end of the year, Scott Redding came in and was straight on the pace with a hat-trick of podiums in his debut round in Australia, whilst he’d likewise challenge for the title until the end. He missed out at Estoril but with Davies winning Race 2 ahead of Redding, 950 Ducati podiums had been achieved. The tally continued to be racked up throughout 2021 with Redding, Italian star Michael Ruben Rinaldi and rookie Axel Bassani, whilst Alvaro Bautista’s return to red in 2022 has seen him lead the way and ultimately clinch the 1000th Ducati podium at Most in an epic Race 1.

100/94 – With the most podiums aboard Ducati, Carl Fogarty accounts for exactly 10% of all Ducati podiums. The next best is Troy Bayliss on 94.

46 – Ducati have won at 46 circuits in WorldSBK, more than any other manufacturer – they’ve missed out at Mandalika, Oran Park, Paul Ricard, Moscow Raceway, Albacete and Istanbul Park.

34 – 34 straight seasons of Ducati achieving at least one podium; no manufacturer has achieved this.