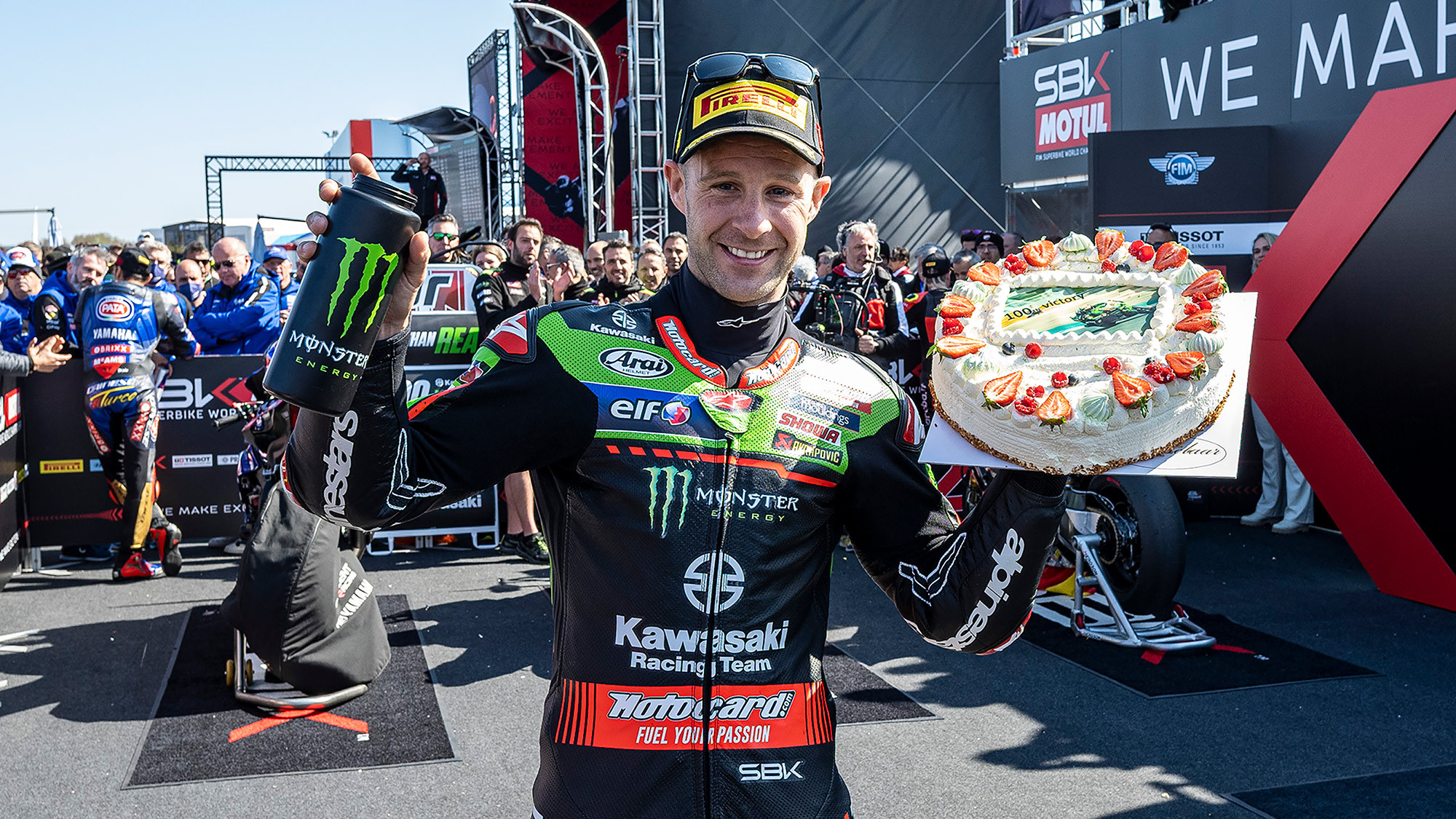 The six-time World Champion took a 100th win with Kawasaki at Assen, thus making him the only rider across World Championship motorcycle road racing to achieve this with one manufacturer

The 2022 MOTUL FIM Superbike World Championship is already shaping up to be a thriller and records are being smashed right from the word go. 12 months ago, Jonathan Rea (Kawasaki Racing Team WorldSBK) started his title defence with a 100th WorldSBK race win, achieved in Race 1 at MotorLand Aragon. In the fifth race of the 2022 season – the Tissot Superpole Race at Assen – the record-breaking six-time world Champion took his 100th win for Kawasaki, thus becoming the first rider in the history of solo World Championship motorcycle road racing to rack up 100 wins with a single manufacturer. So, after his latest achievement, how does it compare to others, what are his best races and statistically, how have those 100 race wins been won?

HAPPY HUNTING GROUNDS: the key circuits for Rea and Kawasaki

Every rider has a favourite circuit, but for Rea and Kawasaki, there’s multiple circuits that they’ve dominated at. Assen and Portimao are without a doubt the pairs’ best tracks, with 12 wins at each of the circuits together. They’ve also taken nine wins together at Magny-Cours, also clinching three titles, whilst MotorLand Aragon has welcomed another nine wins for Rea. At those four circuits, 42 wins have been accumulated, enough to put him fifth in the current standings or fourth if you remove him from his top slot right now. Seven wins at the place he considered a second home, Phillip Island, plus another seven at Misano, six at Imola and five at Donington Park are just some of the places where Rea has racked up wins. Since joining Kawasaki, 28 of his 100 Kawasaki wins have been decided by less than a second, proving it hasn’t all been plain sailing.

Nobody has ever achieved 100 wins for a single manufacturer in either WorldSBK, MotoGP™ or 500cc. In WorldSBK, the next best is Ducati legend Carl Fogarty, who notched up an impressive 55 race wins for the Bologna manufacturer during his tenure there. In terms of Honda, Colin Edwards is the most successful rider in their history with 31 wins and two titles, whilst Noriyuki Haga is Yamaha’s best at 27 but without a title; BMW’s most successful rider in terms of wins is Marco Melandri with 9.

For manufacturers not on the grid, it’s Aprilia leading the way with Max Biaggi taking 18 of the manufacturer’s 52, Troy Corser took 10 of Suzuki’s 32, whilst Bimota are next with 11 wins, of which five were taken by Davide Tardozzi in WorldSBK’s first year in 1988. Looking at MotoGP™ since its introduction in 2002, the most successful is Marc Marquez with 59 wins for Honda, followed by MotoGP™ Legend Valentino Rossi, with 56 wins for Yamaha. Overall in the premier class, Giacomo Agostini, another MotoGP™ Legend, leads the way with 62 wins for MV Agusta.

SOME OF THE BEST: a shortlist of some Rea’s finest wins

The first taste of success for Kawasaki will never be forgotten, from back in 2015’s Race 1 at Phillip Island, whilst later in the year, even a last lap error at Sepang couldn’t defeat him. Going into 2016, Phillip Island’s Race 1 was another classic, whilst 2017 saw his first win in the United Kingdom for Kawasaki, with Race 2 at Donington Park, which was also Kawasaki’s 100th WorldSBK win. Magny-Cours Race 1 welcomed him as the first rider to win three straight WorldSBK titles, before 2018 saw him make more history, taking a 60th win in WorldSBK, surpassing Carl Fogarty’s previous record of 59, at Brno in Race 1.

In 2019, he overcame Alvaro Bautista’s onslaught in the first half of the season with a victory and the title at Magny-Cours in Race 2. 2020 saw his first final lap scrap with Toprak Razgatlioglu as a Yamaha rider, as he passed him at the final corner at Phillip Island in the Superpole Race. He took his sixth and, to-date, last WorldSBK title in Race 1 at Estoril in 2020, before starting 2021 in style with a 100th WorldSBK win at Aragon in Race 1. Even in 2022, Rea’s started well with a final corner battle with Alvaro Bautista (Aruba.it Racing – Ducati) at Aragon in Race 1.

Will Rea make more history? Find out with the 2022 WorldSBK VideoPass!