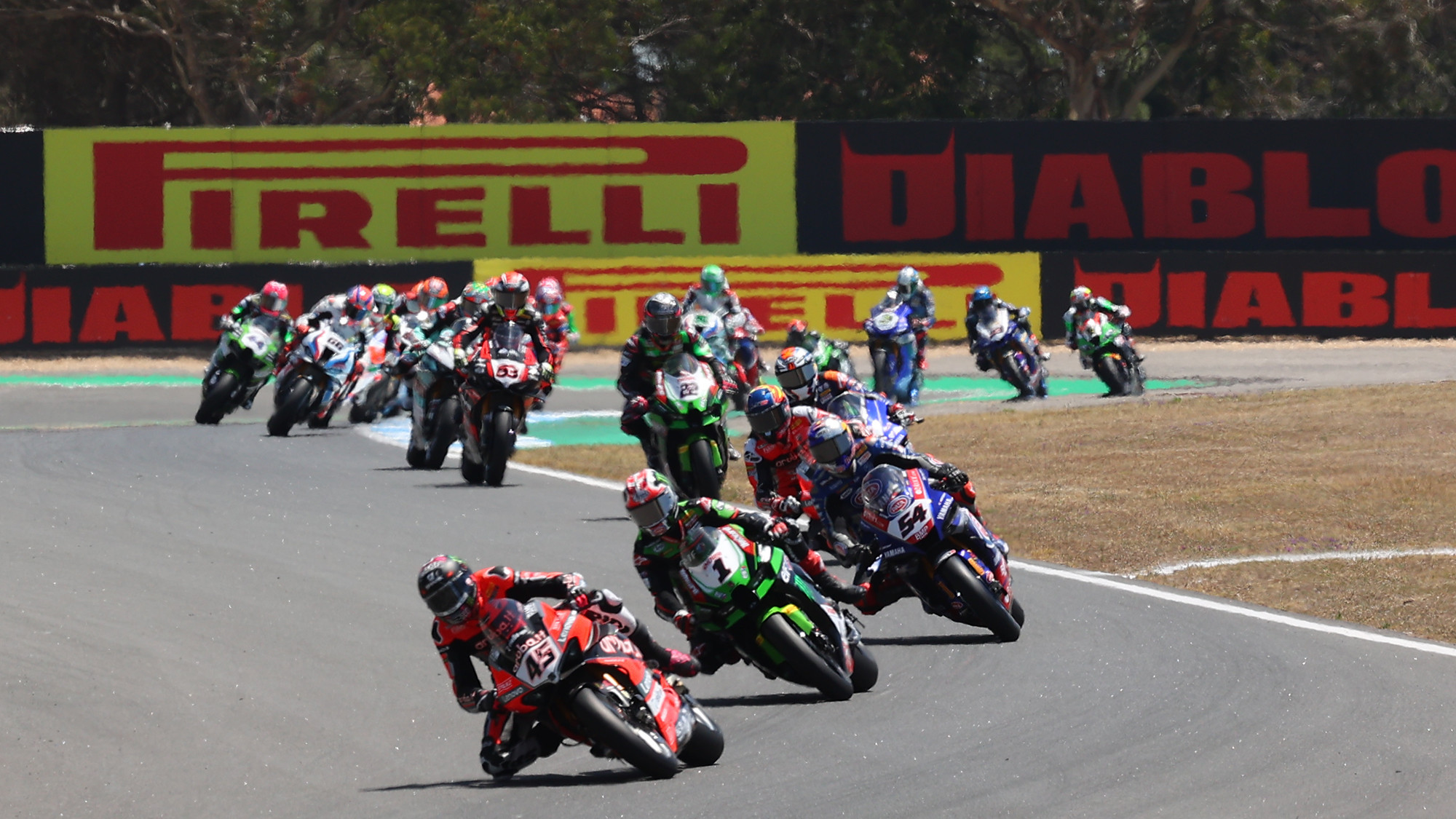 The 2021 MOTUL FIM Superbike World Championship is ready to tackle the first ‘returning’ circuit on the calendar, with the magical, majestic Misano World Circuit “Marco Simoncelli” ready to rock WorldSBK once more. The Championship fight is alive with just 36 points between the top three, with Jonathan Rea (Kawasaki Racing Team WorldSBK) leading Toprak Razgatlioglu (Pata Yamaha with BRIXX WorldSBK) into round three. Misano was the scene of their first final lap showdown for victory back in Race 2 in 2019, so will we see more of the same again?

KAWASAKI VS YAMAHA VS DUCATI: a three-way duel

He’s a maestro of Misano, it’s the scene of his first win; Jonathan Rea’s relentless records tend to be evident at most of the circuits which are a staple feature on the calendar, but Misano has an air of magic around it. Countless victories and a strong circuit for the ZX-10RR, Rea could well be on to create more Misano memories and extend his Championship advantage. On the other side of the garage is teammate Alex Lowes, who suffered a difficult Estoril Round, blighted by bad luck. He’s got a good record at Misano, but it’ll be his first experience of the track on the Kawasaki in racing terms.

It was the setting for one of his first attacks on WorldSBK victory and he gave it everything, although you get the feeling in 2021 that Toprak Razgatlioglu is going to live no stone unturned in his quest for a first win of 2021. Razgatlioglu’s podium from Race 2 in 2019 may seem a distant memory, but the last time WorldSBK raced at Misano, it was the headlining duel with Rea that stole the show and got the fans on their feet. After three podiums at Estoril and nothing but top six finishes so far this year, Toprak wants to taste victory. Local hero Andrea Locatelli (Pata Yamaha with BRIXX WorldSBK) heads for his first home event in the WorldSBK paddock after a best race finish of fifth in Race 2 at Estoril and is top Italian in the standings – could he be a strong outside bet of a good result?

Heading home and eager to strike back after bitter disappointment in Estoril’s Race 2, the factory Ducati team of Scott Redding (Aruba.it Racing – Ducati) and teammate Michael Ruben Rinaldi will aim to utilise all of their preseason testing at Misano to make it count come race action. Redding, who crashed out in the heat of the battle with title rival with seven laps to go at Estoril in Race 2, has never raced a WorldSBK bike at Misano, so it will be a voyage of discovery this weekend; teammate Rinaldi has WorldSBK experience and the warmth of the home fans cheering him on. After a mixed Estoril, will it be a Misano masterclass?

The all-new BMW M 1000 RR has yet to be all-conquering, but Michael van der Mark (BMW Motorrad WorldSBK Team) has been all-action so far this year and also a pleasant surprise inside the top six on occasion. Continuing his adaptation to the bike from his Yamaha of previous years, he has so far had the racing edge over his teammate Tom Sykes. Sykes himself returns to Misano, a happy territory for BMW, after he gave them their first podium in 2019 when they returned as a factory effort to the Championship. Both van der Mark and Sykes have good records in the Adriatic, something that they’ll hope to strengthen in the coming races.

It’s another new experience for Team HRC and the Honda Fireblade CBR1000RR-R SP, with it being the first time that the bike and the factory team have visited Misano. After a disastrous start to his weekend at Estoril with three crashes on Friday, Alvaro Bautista managed to rekindle good feelings with the bike throughout the races as he came through from 18th on the grid for a hat-trick of top ten finishes. He took his first premier-class MotoGP™ at Misano in a final lap showdown back in 2012 and was a race winner in WorldSBK for Ducati in 2019. For Leon Haslam (Team HRC), he’ll hope for a return to being a firm fixture inside the top ten after a relatively unassuming first two rounds.

INDEPENDENT STARS AND ROOKIE REVELATIONS: is an upset on the horizon?

Always thriving off the support of the Ducatisti and the Italian passion, Chaz Davies (Team GoEleven) returns to Misano aboard the Ducati Panigale V4 R, with the aim of building on his first podium of 2021 from last time out at Misano. He’s locked in combat however, with Garrett Gerloff (GRT Yamaha WorldSBK Team) taking it to him as they fight it out to be top Independent. Although Gerloff’s looked like he’s had a stronger pace, mistakes have cost him dearly. They’re also not just battling for top Independent but for the title overall, with Gerloff in particular showing a sparkling pace in the opening two rounds. One rider who is in some sort of form is Eugene Laverty (RC Squadra Corse), who really showed good potential at Estoril. Having never taken the BMW to Misano, it’ll be a new experience and a new learning curve this weekend in Italy.

Leading the rest of the battles for the Independents and mainly the rookies, Axel Bassani (Motocorsa Racing) aims high and wants to shine at home, whilst off the back of two top ten finishes, Tito Rabat (Barni Racing Team) also hopes to continue to figure it out in WorldSBK at a circuit he knows well. Lucas Mahias (Kawasaki Puccetti Racing) put in a stunning Gaerne Estoril Round and will hope to emulate this at Misano, a circuit he has a good record at with podiums in WorldSSP. Kohta Nozane (GRT Yamaha WorldSBK Team) has tested at Misano and has been quietly impressive in the opening two rounds, whilst behind him are the likes of Jonas Folger (Bonovo MGM Racing), Isaac Viñales (ORELAC Racing VerdNatura) and Christophe Ponsson (Alstare Yamaha). Loris Cresson (TPR Team Pedercini Racing) and teammate Samuele Cavalieri aim to score points for the first time in 2021.

Don't forget to check out the FREE official programme from Misano and watch the 2021 season unfold in style with the WorldSBK VideoPass!