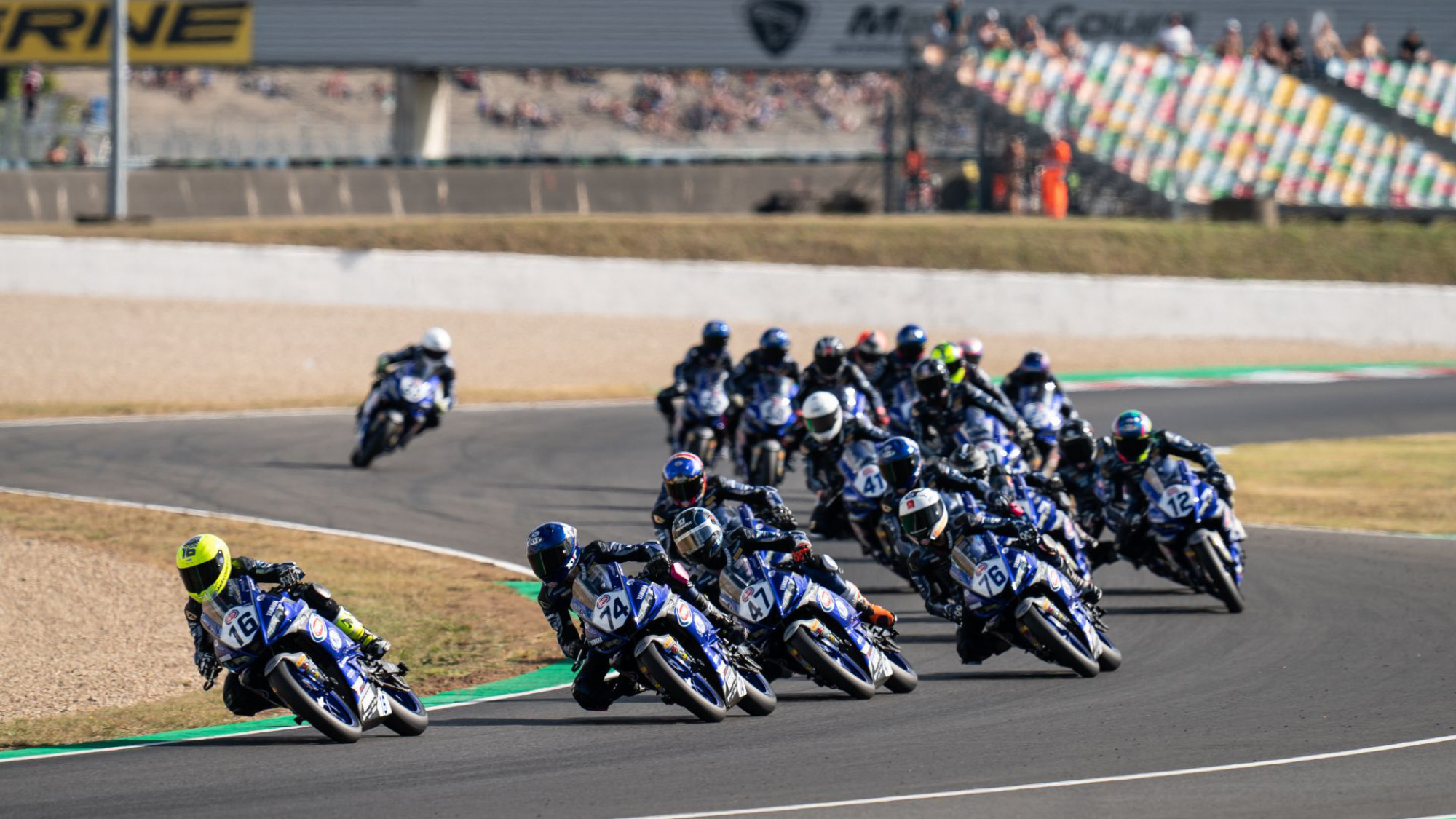 The penultimate round of the maiden Yamaha R3 bLU cRU European Cup season hit the Circuit de Nevers Magny-Cours last weekend, in support of the FIM Superbike World Championship, with Britain’s Fenton Harrison Seabright doing the double, as incidents ensure that the battle for the title come down to the wire at the finale.

While the Magny-Cours venue is renowned for wet weather, temperatures soared towards 30 degrees Centigrade last weekend, and it was Seabright who joined Slovakia’s Maxim Repak as the series’ second double-winner, with the top four now separated by just 22 points as they prepare for the upcoming Barcelona round.

On-track action got underway with the Friday morning Free Practice session, which saw the young riders, all aged 12-20, get their one and only experience of wet track conditions, following overnight rain. Italy’s Edoardo Colombi went fastest of all, ahead of Greece’s Ioannis-Konstantinos Peristeras and Spain’s Juan Antonio Conesa Benito.

By the time the afternoon’s Superpole qualifying session rolled around, the track had dried, and the 21 riders had 30 minutes to get accustomed to the conditions aboard their Yamaha R3 machinery. Championship leader heading into the weekend, Iker Garcia Abella, edged Repak for pole position, with Conesa Benito joining them on the front row. Spain’s Julian Giral headed row two, alongside Seabright and Colombi.

In Race 1, Conesa Benito jumped into the lead, while Repak dropped to eighth. The 15-year-old climbed back into the podium battle but was collected by Peristeras while out front, causing him to DNF. On the final lap, Giral and Garcia Abella were battling for best-of-the-rest behind Seabright, but made contact, with the former coming off worse and crashing out of the race.

Seabright, who was carrying a collarbone injury sustained at the VR46 `Master Camp, crossed the line to take victory, with Brazil’s Humberto Maier second and Conesa Benito eventually being awarded third place after Giral was penalised one place for irresponsible riding on the final lap.

“I went into Race 1 knowing I had the shoulder injury, so I was just aiming to stick with the front group and see how I felt by the end of it,” Seabright said. “About three or four laps in there was a lot of ‘cuffuffle’ in the lead battle and the race pace was quite slow, so I thought maybe I could push. I got to the front and I managed to pull a gap, so at that point it was about hitting my braking and the apex’s at the right point. We managed to do that and got a lead of over three seconds. In the last few laps, I was getting a bit tired with my collarbone, but I managed to bring it home, which I was more than happy with. Not something I was expecting, but I was thrilled with the performance.”

Repak took the lead as the Yamaha R3 bLU cRU European Cup field filed through Turn 1 in the second race, but Garcia Abella had to return to the pits following a mechanical issue. Over the course of the race, the remaining title contenders swapped positions for the lead, but it was Seabright who once again hit the front, this time in the final moments of the last lap, to take victory.

Giral finished second, and with it moved into the championship lead, as Repak completed the podium places.

“In Race 2, I was struggling with some pain even before the start of the race,” Seabright revealed. “But we just had the same plan and pushed through. I stayed with the top five for pretty much the whole race and I was happy with that. With about four laps to go, it became a bit of a struggle, particularly with the chicanes – they’re quite fast and physically demanding. We managed it though, I knew I had to push on the last lap and we came out on top again. I’m really pleased with this race weekend, it’s probably the best weekend of my career, especially with me wearing my mum’s tribute helmet.”

The bLU cRU youngsters will now just have one weekend off before a final showdown at Barcelona (15-16 September) that sees Giral, Garcia Abella, Repak and Seabright separated by just 22 points, and all looking to become the first-ever Yamaha R3 bLU cRU European Cup champion.