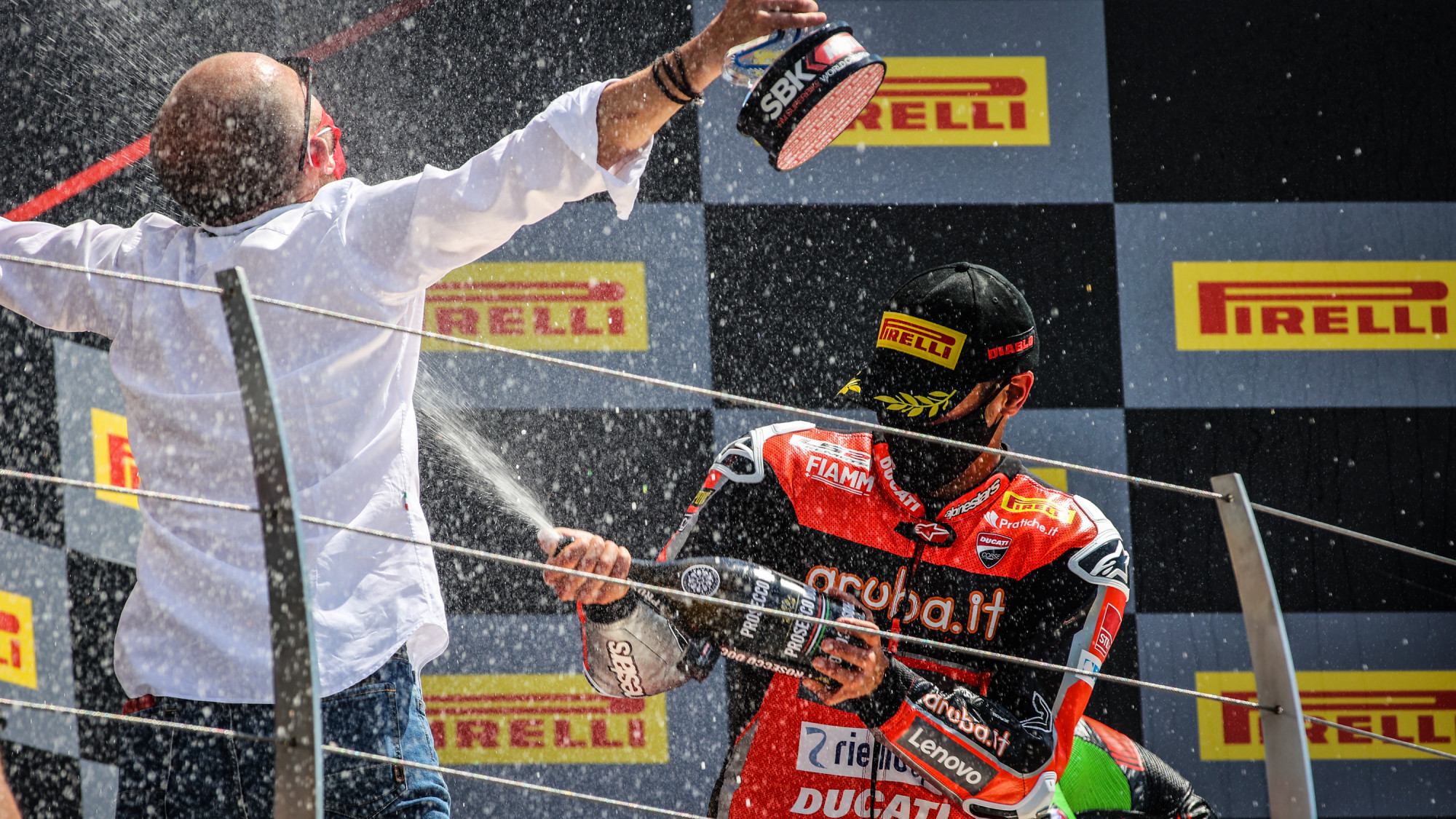 From historic milestones to landmark achievements and new horizon for 2021, Misano proved unpredictable and unmissable

The 2021 MOTUL FIM Superbike World Championship has seen the tide turn at the Misano World Circuit “Marco Simoncelli” with Michael Ruben Rinaldi (Aruba.it Racing – Ducati) and Toprak Razgatlioglu (Pata Yamaha with BRIXX WorldSBK) taking victories in the past weekend. The gap is down to 20 points between Jonathan Rea (Kawasaki Racing Team WorldSBK) and Razgatlioglu in second, with both being super-consistent so far in 2021. However, on the way to that, there were historic numbers racked up throughout the field, and we take a look at some of the big-hitters below in the stats round-up of the round.

370 – Rinaldi’s win in the Tissot Superpole Race was also the 370th for Ducati in World Superbike.

325 – Toprak Razgatlioglu’s win on Sunday in Race 2 was the 325th podium place for Yamaha in WorldSBK. They are 68 behind Honda, who are in third overall.

255 – Jonathan Rea also got to another milestone, with a 255th fastest lap in WorldSBK for Great Britain.

75-76 – Ten Kate Racing Yamaha in World Supersport took a second win with Yamaha in Race 1 with Dominique Aegerter, making it their 75th in the class, before taking a 76th in Race 2.

30 – Jonathan Rea took his 30th career pole at on Saturday during the Tissot Superpole session, he is now 20 behind ex-teammate Tom Sykes.

21 – The number 21 on a factory Ducati was back on the top step with Michael Ruben Rinaldi’s first wins of 2021, the first time the #21 has won on a factory bike since Troy Bayliss at Portimao in Race 2 in 2008.

9 – The pole position by Rea was Kawasaki’s ninth consecutive pole at Misano, an equal circuit record for consecutive poles by a manufacturer at a circuit – the other is Ducati with nine at Brands Hatch.

6 – Rinaldi’s second place in Race 2 at Misano was his sixth podium, putting him level with Alex Barros, Michael Dowson, Xavi Fores, Ryuichi Kiyonari and Andrew Pitt. All besides Dowson achieved their podiums with just one manufacturer.

4 – Four wins for Yamaha for Toprak Razgatlioglu, the same number for the manufacturer as Marco Melandri (all achieved in 2011) and Michael van der Mark (wins achieved 2018 to 2020). Only three riders have achieved more wins for Yamaha: Noriyuki Haga (27), Ben Spies (14) and Fabrizio Pirovano (10).

3 – Axel Bassani (Motocorsa Racing) took his first WorldSBK top ten in Race 1, before following it up with two more top ten finishes, making it three for the weekend. His best result was sixth in the Tissot Superpole Race. It was also the best result for the Motocorsa Racing outfit since the team joined the WorldSBK grid.

3 – For the first time since 2008, Ten Kate Racing have won three consecutive World Supersport races. Back then, it was part of a string of four, when Andrew Pitt won at Nurburgring and Misano, and then Jonathan Rea won at Brno and Brands Hatch.

1 – First time Ten Kate Racing are at the head of the World Supersport Championship since Magny-Cours 2010, when Kenan Sofuoglu won the title.

0 – For the first time in his WorldSBK career, Scott Redding (Aruba.it Racing – Ducati) scored no podiums in a WorldSBK round.

Enjoy all of the action in WorldSBK throughout the 2021 season with the WorldSBK VideoPass!