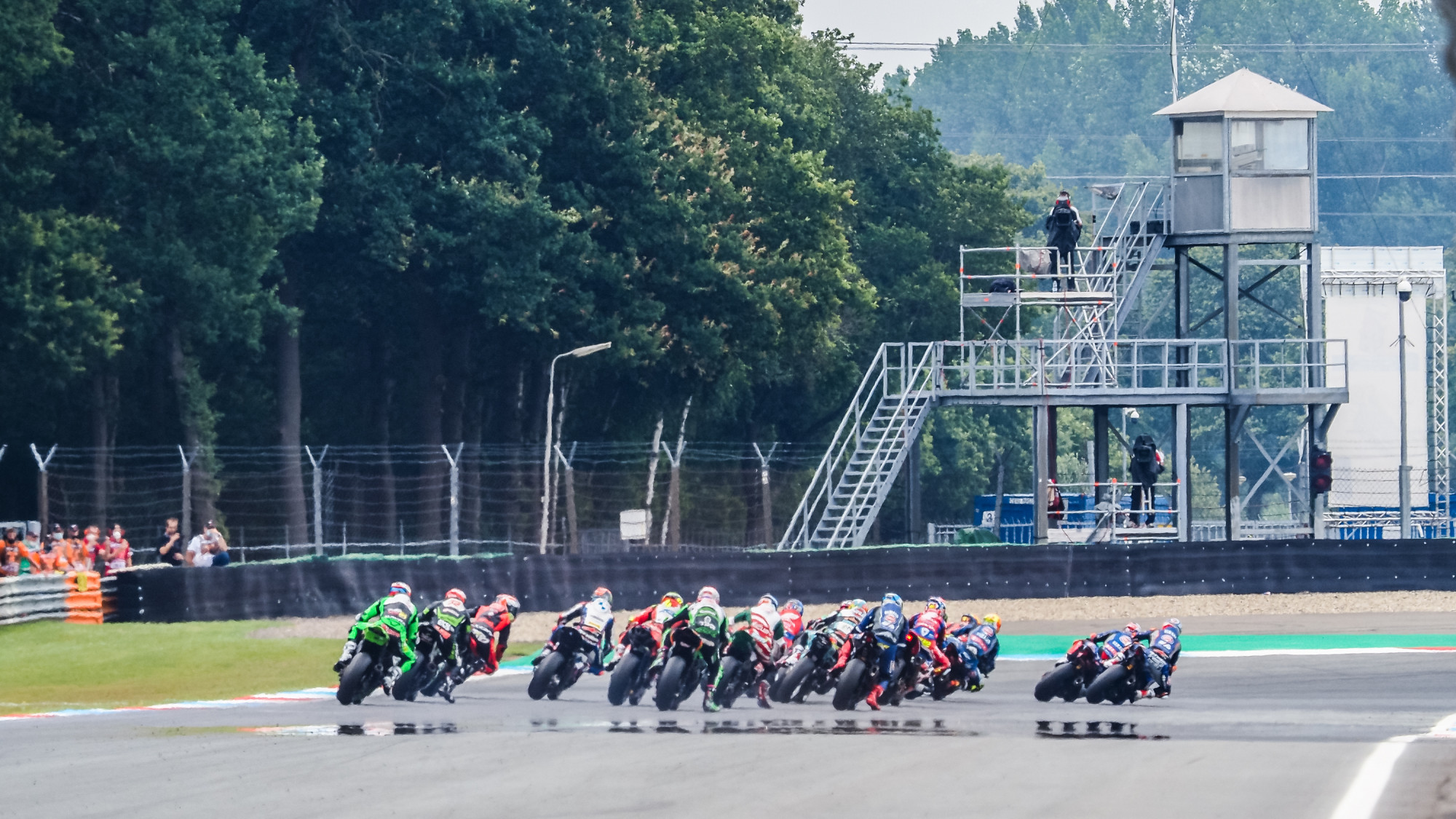 The 2021 WorldSBK season ignited in the Netherlands, and there was history made and records broken throughout

The stats keep piling up and the records keep getting smashed as the 2021 MOTUL FIM Superbike World Championship took yet another dramatic twist and turn at the Cathedral of Speed: the TT Circuit Assen. The Prosecco DOC Dutch Round – the fifth round of 2021 – gave action and drama throughout and you can watch 45-minute highlights of the round here. Meanwhile, we’ve debriefed all the major stats from the weekend and whether it was Jonathan Rea’s (Kawasaki Racing Team WorldSBK) startling Assen dominance or Andrea Locatelli’s (Pata Yamaha with BRIXX WorldSBK) first ever podium, there were plenty of statistical stories to tell.

960 – Ducati took a 960th podium place in Race 2 at Assen, with Scott Redding (Aruba.it Racing – Ducati) in second. Ducati’s first podium place came in Race 1 at Donington Park in 1988 (the first race of WorldSBK), when Marco Lucchinelli was second.

331 – Finishing third in Race 2 and taking his first ever World Superbike podium, Andrea Locatelli (Pata Yamaha with BRIXX WorldSBK) gave Yamaha a 331st podium placement, a race after teammate Toprak Razgatlioglu gave them their 330th in the Tissot Superpole Race.

288 – Following on from Jonathan Rea’s dominant weekend in the Netherlands, Great Britain is now on 288 wins. The next one will put them 170 clear of the next best country (USA, 119).

210 – The pole position by Rea was the 210th front row for Kawasaki in WorldSBK.

199 – Jonathan Rea took his 199th podium in Race 2 at Assen, meaning he could become the first WorldSBK rider ever to achieve 200 on the Championship’s first visit to Most.

125 – Locatelli’s astounding podium meant he was the 125th rider on the podium in WorldSBK. The 100th different rider also came at Assen, with Juan Borja in 2000 in Race 1, with 2nd.

55 – Locatelli’s podium is the first podium for the #55 in WorldSBK since Regis Laconi took his last podium at Brands Hatch with 3rd in Race 1, 2005.

35 – Toprak Razgatlioglu (Pata Yamaha with BRIXX WorldSBK) took his 35th WorldSBK podium in the Tissot Superpole Race, the 27th rider in WorldSBK history to achieve this.

19 – Locatelli’s podium means he is the 19th different Italian on the podium.

16 – 16 top ten finishes for BMW in the last 13 WorldSBK races (including Estoril Race 2, 2020), achieved by Tom Sykes (BMW Motorrad WorldSBK Team) and teammate Michael van der Mark. The last time this happened was back in 2013 with Marco Melandri and Chaz Davies, as part of a 42-race top ten streak, which stretched back to Misano Race 2, 2012 and involved other names such as Michel Fabrizio, Ayrton Badovini and Leon Haslam.

15 – Jonathan Rea’s hat-trick of wins saw him set a record for wins at one circuit in WorldSBK: 15. This number is also a magical number at Assen, as with his Race 2 win, it was the 15th race won at Assen by a rider with the #1 on the front of their bike.

7 – Michael Ruben Rinaldi (Aruba.it Racing – Ducati) took a seventh career podium in the Tissot Superpole Race. All of his podiums have been for Ducati, means he matches the podium tally for the manufacturer of Mauro Lucchiari, Max Biaggi and Lorenzo Lanzi. The next target is ten, achieved by Sylvain Guintoli across 2011 and 2012.

6 – It has been six years since the last WorldSSP Champion stepped up to WorldSBK and took a podium in their rookie season – it was Michael van der Mark on a Honda back then, also third place, also at Assen. It’s also been six years since the last time two Italians were able to achieve a podium in a single season – Davide Giugliano and Max Biaggi in 2015 at Imola and Sepang respectively (Giugliano also at Portimao and Laguna Seca).

5 – Andrea Locatelli becomes the fifth different Italian rider to take a podium for Yamaha in WorldSBK. The others are Fabrizio Pirovano (43), Marco Melandri (18), Vittoriano Guareschi (2) and Paolo Casoli (2). He is the first Italian on a Yamaha to take a podium at Assen since Paolo Casoli took his first ever podium, also at Assen, also from fourth on the grid, in second place in 1994.¡

5 – Alvaro Bautista (Team HRC) gave Honda their best full-race finish of the year with a fifth place at Assen in Race 2; this is Honda’s first fifth place at Assen since Bautista’s current teammate, Leon Haslam, achieved fifth in Race 2 2014. It was also Honda’s best result at the circuit since 2016 when van der Mark was on the podium.

3 – The first points achieved by Loris Cresson (OUTDO TPR Team Pedercini Racing) in his rookie season with 13th in Race 1 at Assen. These were the first points for a Belgian rider in WorldSBK since the late Michael Paquay in 1996 at Brands Hatch in Race 2, with 12th.

Watch the rest of the 2021 World Superbike season with the WorldSBK VideoPass!