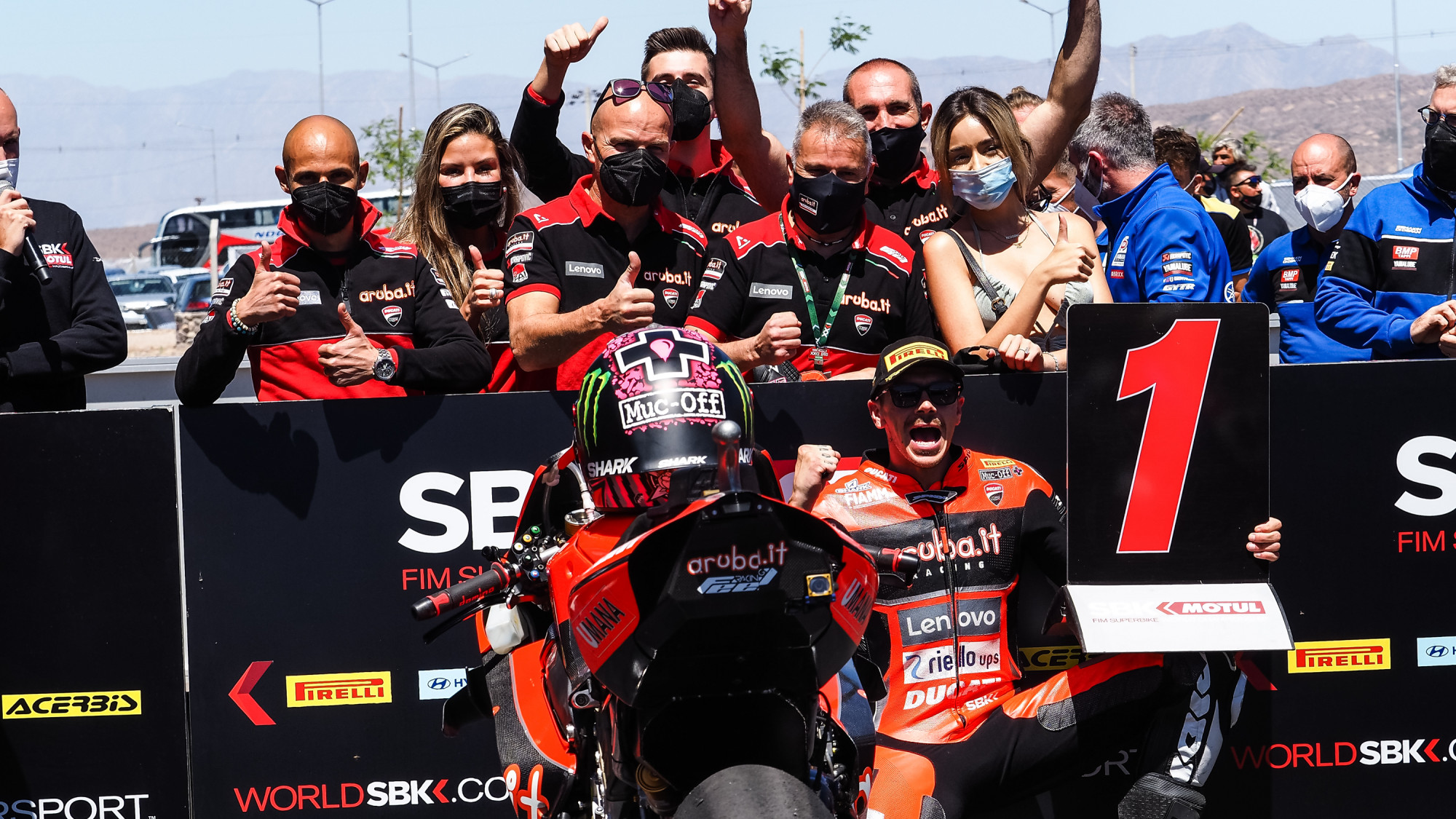 In what was the 150th pole for Great Britain, Scott Redding gave Ducati their first pole of the season, whilst there was a huge surprise on – and off – the front row…

The 2021 MOTUL FIM Superbike World Championship’s penultimate Tissot Superpole session of the season erupted as the Motul Argentinean Round at the Circuito San Juan Villicum continued to unfold. Having set the pace through every single Free Practice session, Championship leader Toprak Razgatlioglu (Pata Yamaha with Brixx WorldSBK) was the favourite for pole position, but it was Scott Redding (Aruba.it Racing – Ducati) who stormed to pole, his first in over a year.

STORY OF THE SESSION: strategy is key

As the green flag waved, riders took to the track for their first run and their first Superpole session in San Juan since 2019. Razgatlioglu, Jonathan Rea (Kawasaki Racing Team WorldSBK) and teammate Alex Lowes were on the Q tyre straight away, along with the likes of Gerloff (GRT Yamaha WorldSBK Team), Michael Ruben Rinaldi (Aruba.it Racing – Ducati) and Andrea Locatelli (Pata Yamaha with Brixx WorldSBK). After the first runs were done, Razgatlioglu led the way ahead of Rea and Locatelli, with Lowes and Gerloff fourth and fifth ahead of an impressive Axel Bassani (Motocorsa Racing). Rea made a mistake on his second flying lap before returning to the pitlane, whilst Toprak, Locatelli and Gerloff all improved on their second flying lap, meaning Rea had time to find and potential to do it.

Lying slightly outside of everyone else’s schedule was Scott Redding (Aruba.it Racing – Ducati), who originally went out with a race tyre before he put in a Q tyre in the final eight minutes and was looking good, setting overall best sector times, taking provisional pole. With less than five minutes to go, everyone was out for their second runs, everyone else was also on their next run with Q tyres, with Lowes moving into third before Bassani moved into third with two minutes to go. Jonathan Rea made a mistake on his first lap of his second run, meaning he now had to push on during his second lap, something he didn’t do on his first run. The first crasher of the session was home-hero Leandro ‘Tati’ Mercado (MIE Racing Honda Team), going down at Turn 2; he was OK and walked away.

Mercado’s crash brought out the yellow flags, meaning that there was nobody else who was on a ‘live’ lap, so pole position went to San Juan debutant Scott Redding, his first pole position of the season and his first since Jerez last year – his only other pole. Redding’s pole is also the 150th for Great Britain in WorldSBK and Ducati’s third consecutive in Argentina. Razgatlioglu wasn’t able to capitalise on his pace as he could only manage second place, albeit the fifth consecutive front row start for the Turkish rider, whilst it was a sublime performance for Axel Bassani, taking third place and became the 152nd rider to get a front row after WorldSBK Superpole and the 25th from Italy.

ROW TWO: the title flight to come from there?

On the second row of the grid and the first Kawasaki, Alex Lowes was able to hold off his teammate Jonathan Rea. Rea’s mistakes on both his runs mean that his time isn’t indicative of the potential he had, as he misses the front row for the first time since he was 15th at Estoril in 2020. It was an impressive sixth place for Andrea Locatelli, as the Italian rookie took a solid starting position on his San Juan debut; he will look to get in and amongst the fight with the Kawasakis he starts alongside.

ACTION-PACKED ROW 3 AND 4: watch for a surprise

Heading up the third row of the grid, Michael van der Mark (BMW Motorrad WorldSBK Team) was on the second row until the closing stages and with another third row start for van der Mark, he’ll be primed for a strong set of races. Eighth place went to Garrett Gerloff (GRT Yamaha WorldSBK Team), with the American making a solid San Juan debut ahead of Michael Ruben Rinaldi, who failed to make a strong impression in the battle for pole. Leon Haslam (Team HRC) made it five manufacturers inside the top ten as he took tenth and heads up row four. Isaac Viñales (Orelac Racing VerdNatura) and Eugene Laverty (BMW Motorrad WorldSBK Team) join Haslam on the fourth row.

BEST OF THE REST: Davies and Bautista out of position

Chaz Davies was 13th and less than a second from pole, ahead of Mercado who in the end, despite crashing, didn’t lose too many positions. The big surprise was that Alvaro Bautista (Team HRC) was mired all the way down in 15th place, less than half a tenth ahead of Samuele Cavalieri (Barni Racing Team). Kohta Nozane (GRT Yamaha WorldSBK Team) took 17th ahead of Tito Rabat (Kawasaki Puccetti Racing), with Christophe Ponsson (Gil Motor Sport Yamaha), Luciano Ribodino (OUTDO TPR Team Pedercini Racing) and teammate Marco Solorza bringing up the rear.

WorldSBK Race 1 kicks off at 15:00 local time (GMT-3) and you can watch all the drama with the WorldSBK VideoPass!