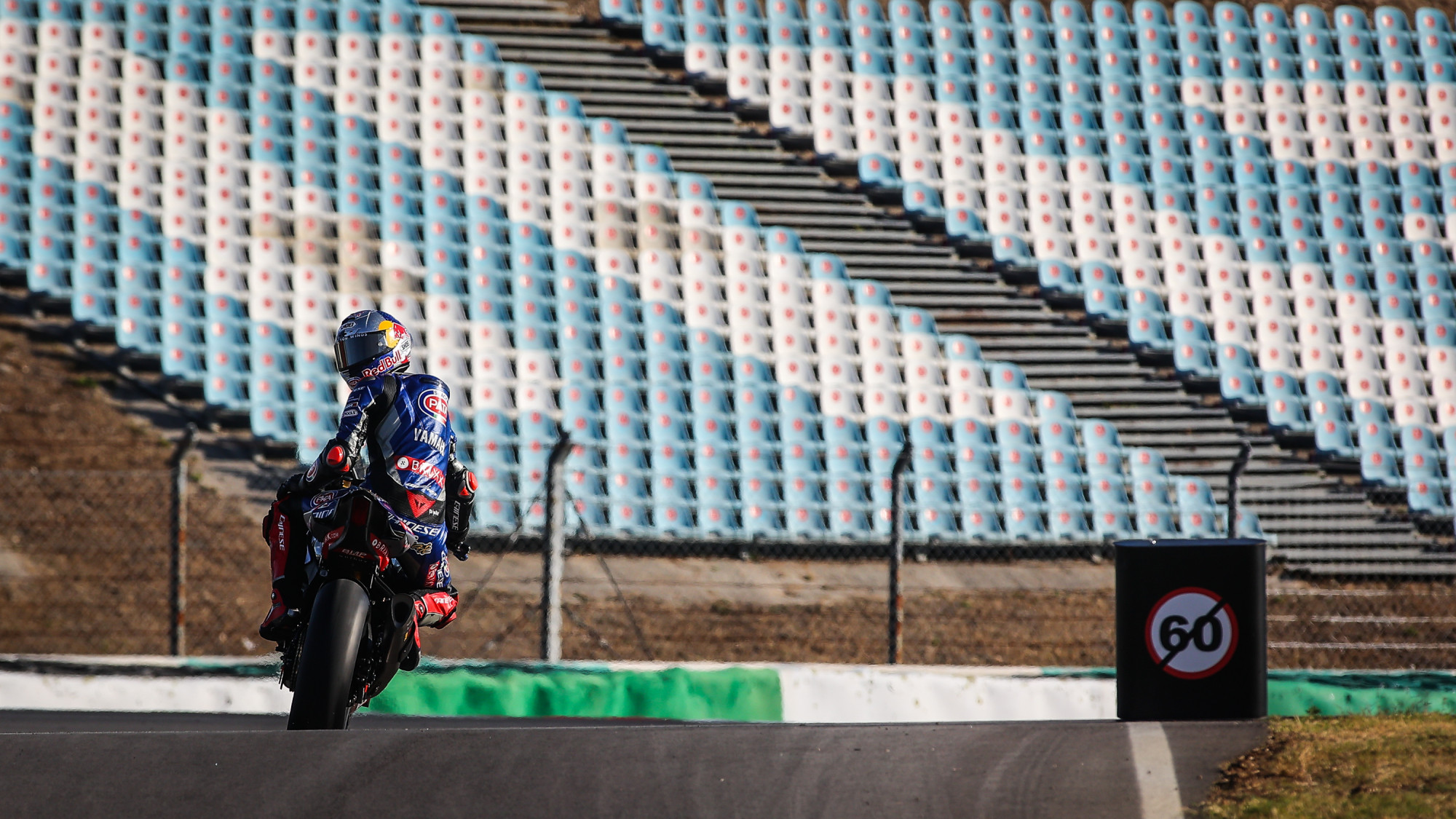 Five factory manufacturers inside the top five places on the grid, the stage is set for a thriller at the rollercoaster

The 2021 MOTUL FIM Superbike World Championship’s final European round of the year is well underway at the Autodromo Internacional do Algarve in Portugal. The Motul Portuguese Round at Portimao saw WorldSBK’s Tissot Superpole session come alive as the fight for pole ignited. As the session ended, it was Toprak Razgatlioglu (Pata Yamaha with Brixx WorldSBK) who stormed to the top with a sensational final flying lap, whilst Jonathan Rea (Kawasaki Racing Team WorldSBK) was pushed back to second.

FIRING UP: the opening stages

As the first laps came in for WorldSBK, Jonathan Rea smashed in the first lap time, with a 1’40.697 being the benchmark time after the opening five minutes with the Q tyre propelling him to provisional pole. Toprak Razgatlioglu put in a strong time to put him second, although just under three tenths from Rea’s top time. Completing the provisional front row was Scott Redding (Aruba.it Racing – Ducati), with him setting his first fast lap slightly out of sync with everyone else. Soon enough though, Leon Haslam (Team HRC), who was fourth on Friday, popped up to second and was a tenth and a half from Rea’s top time.

With just over three minutes to go, most riders came out of pitlane and started their final runs and attacks for pole position. Razgatlioglu and teammate Andrea Locatelli went out on track together, whilst Jonathan Rea was on his own on track, although it didn’t hinder him as he went even quicker on his penultimate flying lap. There was drama for Eugene Laverty (BMW Motorrad WorldSBK Team) who crashed at Turn 13 before remounting, whereas back at the front, the fight was igniting.

First time with back-to-back poles for a @yamaharacingcom rider since 2010: @calcrutchlow in Brno and Silverstone.

Coming to the line to take the chequered flag, it looked like Rea would have pole sorted, but title rival and Championship leader Toprak Razgatlioglu rocketed to pole on his final flying lap. Razgatlioglu kept increasing his margin throughout his fast lap, eventually going some three tenths quicker than Rea to outqualify him for a third consecutive round. Razgatlioglu makes it back-to-back pole positions, the first of his career, whilst Jonathan Rea’s second place is his 11th consecutive front row and thus giving him the Tissot Superpole Award for the year. In third, a mesmerising lap from Leon Haslam gave him a first front row of the year and a first since Estoril in 2020, whilst also being the 200th front row Honda has featured on after Superpole.

Top Ducati honours and leading off the second row, Scott Redding was fourth, although 0.655s behind Razgatlioglu’s stunning time. Making it five manufacturers inside the top five in Superpole was Michael van der Mark (BMW Motorrad WorldSBK), with the Dutchman taking his first top five on the grid after Superpole since Donington Park in July. The only manufacturer with both factory bikes inside the top six were Honda, confirming their rapid improvement in the last few rounds. Alvaro Bautista (Team HRC) completed the top six, his best Superpole session of the 2021 season.

Time for the last flying laps!

Just being bumped off the top two rows thanks to a late-improving Bautista, Andrea Locatelli was seventh ahead of fellow Yamaha rider Garrett Gerloff (GRT Yamaha WorldSBK Team), back inside the top eight on the grid after Superpole since Most, when he was fifth. Gerloff looks like he has rekindled his form from the start of the season, whilst completing the third row was Loris Baz (Team GoEleven), with the super-sub doing another fine job, outqualifying the factory Ducati of Michael Ruben Rinaldi (Aruba.it Racing – Ducati), who rounds out the top ten.

THE REST: surprises behind