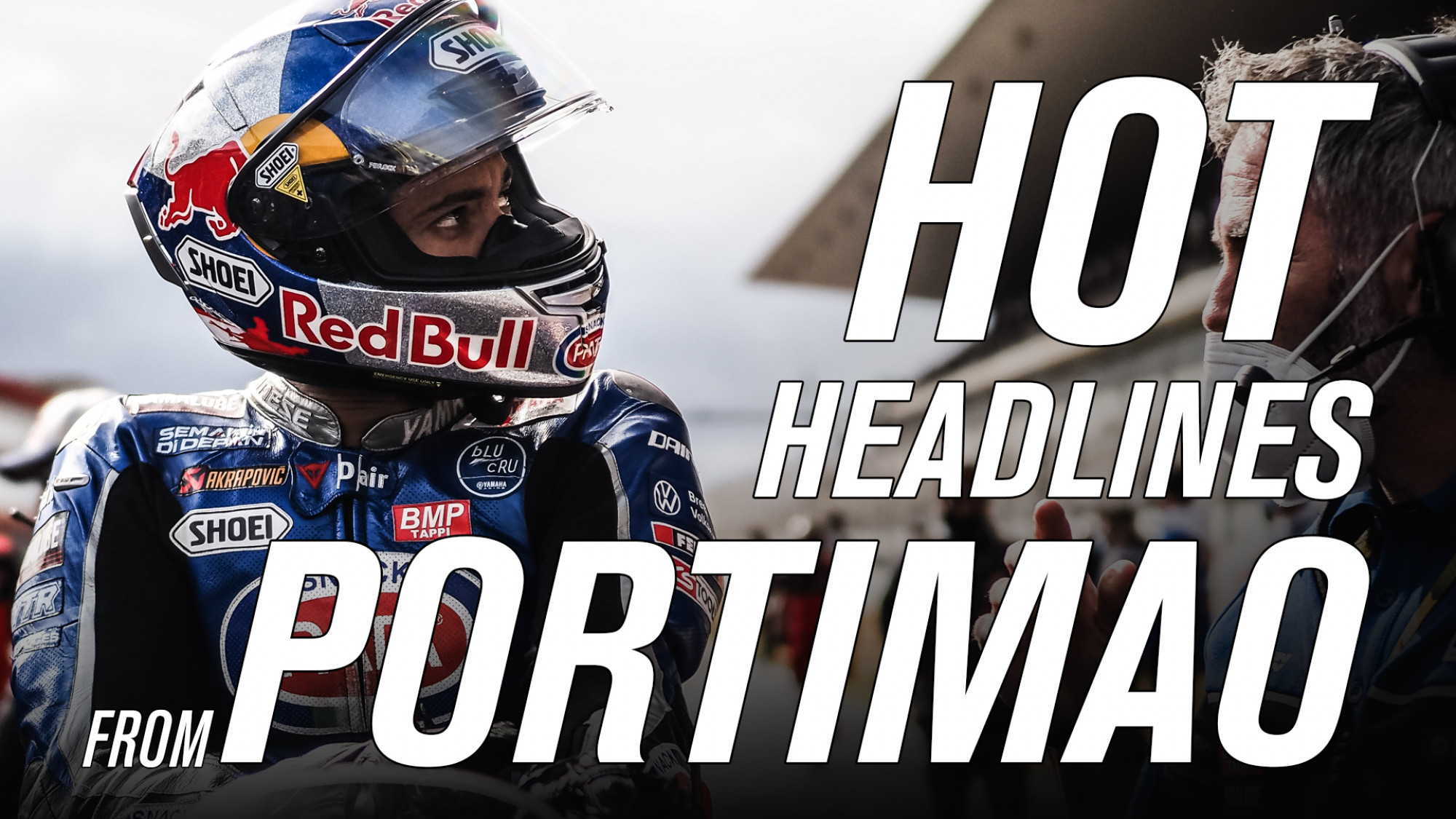 Following a titanic Motul Portuguese Round, no words were minced by WorldSBK stars…

In what was one of the most dramatic weekends in the 2021 MOTUL FIM Superbike World Championship, the Motul Portuguese Round featured plenty of talking points, both on-track and off it. With title rivals clashing off track, a battle for the podium ending in tears during Race 2 and return to winning ways for one manufacturer, emotions ran high at Portimao. There is quite literally plenty of fallout, so who said what in this week’s hot headlines?

Talking on Saturday in his media debrief and speaking about the early battles in Race 1 at Portimao, Jonathan Rea commented on Toprak: “I don’t want to put s**t on Toprak about how he rides, because he is clearly doing a good job and he’s not even at his limit. However, the guy he’s passing is on their limit with the bike and tyres and the combination of everything. I don’t want to complain too much; I’m ready to fight like that and I’m going to fight like that. I can shake his hand after that and not complain, but I’m happy to let the brakes off and use him as a berm. I’m not going to grumble; rubbing is racing. He can train on his kart track in Turkey, but I grew up motocrossing, and that’s also hard.”

“I’m riding completely on my limit… it is every single corner 100%.”

Rea then turned attention to the next round on Sunday afternoon in the debriefs, talking about his approach to Argentina: “It’s the same mentality for Argentina; we can’t think clever about things and ride in a conservative manner; I’m riding completely on my limit to be with these guys. I’m struggling in a few areas, there’s no margin to relax and to sit on top of yourself and guide around the lap. It is every single corner 100%.”

Toprak Razgatlioglu (Pata Yamaha with Brixx WorldSBK): “This is my style; I will never change…”

Following the comments made by Jonathan Rea on Saturday, Toprak Razgatlioglu responded on Sunday, saying: “Jonny started talking about my style; I say again, this is my style, I will never change. I am smiling because now Jonny starts talking, whereas normally it was Scott, saying that I ride a little bit dangerous, but this is my style. I am not scared, maybe Jonny and Scott are scared. For me, it’s not a problem, but it’s better to not talk and to just ride the bike in the track. Jonny was touching me in Navarra, but I didn’t talk. He’s started talking but this is good because it means he’s very angry for the Championship. I don’t like the talking because this is my style and it’s never changing. Every race weekend, I’m fighting like this. I’m not scared, maybe he and Scott are. For me, no problem.” You can read the full fallout here.

Alvaro Bautista (Team HRC): “He doesn’t care about turning. He just cared about putting me out and not losing the position…”

After a late race collision with Loris Baz (Team GoEleven) that took him out of the race, Alvaro Bautista was far from impressed with the Frenchman: “Just exiting from the corner, he was straight to me. If you see the image, you see that exiting the corner, he was over the kerb. In that corner, it’s not a corner we use the kerb for exit like, for example, Turn 14. Even when I saw him, because I didn’t expect, I tried to pick up the bike, but he doesn’t care about turning. He just cared about putting me out and not losing the position. I’m very angry with this movement from Loris but at the same time we have to be happy with the performance, with the work we did. In both races, we were fighting for the podium. That’s the important thing at the end. This is racing and these things can happen.

Loris Baz (Team GoEleven): “I’d say it was a racing incident and I’d say the same if it was the other way around”

Responding to Bautista’s comments but before he was given the penalty, Loris Baz said: “This is the best bike I’ve rode in a long, long time. I feel a bit sad that I have to give it back to Chaz. With Bautista, the same thing happened to me with Rinaldi on Lap 2; he came inside, he pushed me, and I got my arm stuck on his wing, but I didn’t crash. We’ve overtaken Alvaro 20 times since yesterday and every time, closer and closer, particularly at Turn 1. I didn’t expect him at Turn 5 to be honest, I was braking really deep there, and I saw he went wide, so I crossed back and then we touched when we were side-by-side. I’d say it was a racing incident and I’d say the same if it was the other way around. Sometimes, you just want to apologise because that’s never how you want a battle to end up, you always want the battle to go to the chequered flag.”

Giving BMW a first win since 2013, Michael van der Mark had reason to celebrate after his Tissot Superpole Race glory: “To be honest, the first time I rode the M 1000 RR in the wet was at Aragon, and I felt really good. So, I knew, in a wet race, we could do well. We showed that in Superpole at Donington Park when we did quite good but this morning, I must say, I went out and I felt really strong straight away. I was really enjoying it; I think Pirelli brought a harder rain tyre which is in our favour. We didn’t have this in Barcelona, where I was struggling quite a lot; I had a good pace, but I struggled. I was happy it was here, and I could use it. I didn’t know the number of years since the last BMW win, but I knew it was the first one for us; I am happy but if we can get the one in the dry, that’s the real story.

Leon Haslam (Team HRC): “I expected a podium… we’ve made big progress with the bike”

Speaking about his Race 1 and being in the fight for the podium, Leon Haslam said: “Honestly, I expected a podium after being in that battle with Baz. I was head of that battle, struggling a little bit with the front brake from lap one and I didn’t have the confidence in trail braking. I was riding a little bit cautious and when I was with the group, I didn’t have the confidence going into the corner. When I lost a bit of time when I ran off the track, I found it quite easy to catch back up, so I was quite happy that the pace was there. Then, I passed some people for the first time this year on brakes, so for me we’ve made big progress with the bike.”

Michael Ruben Rinaldi’s Saturday was also intriguing, having been in the podium fight before settling for fourth: “I didn’t expect to fight for the podium but when the temperature changes a lot, anything can happen. The level of WorldSBK is huge; everybody inside the top ten is covered by less than a second, so everyday counts. Apart from that, the constant is that Toprak, Jonny and Scott are always on top, and you have to be very precise to stay with them or to stay close to them.”

The Championship race is erupting: watch it all unfold with the WorldSBK VideoPass!