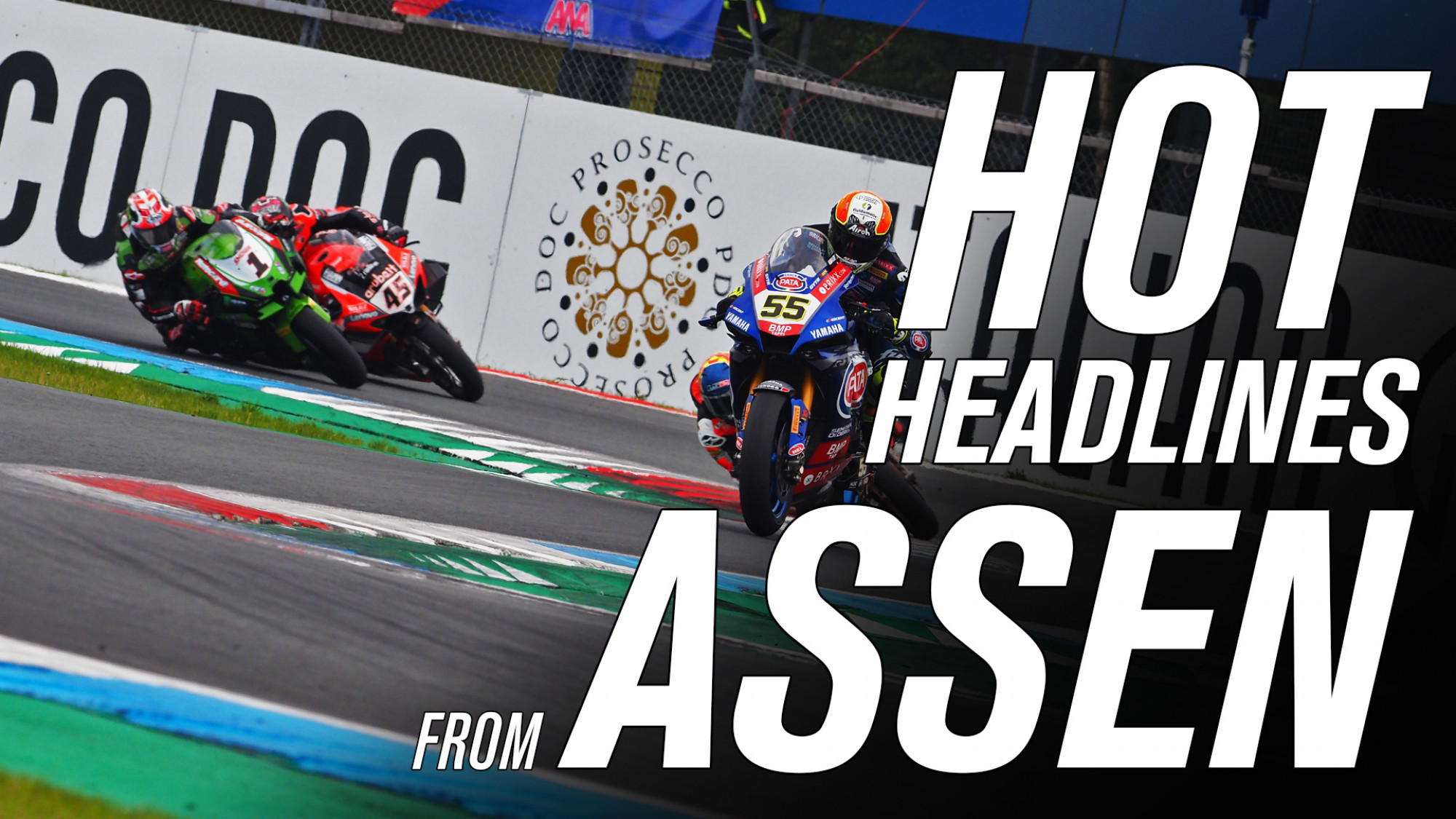 The 2021 MOTUL FIM Superbike World Championship saw a mesmerising Prosecco DOC Dutch Round at the TT Circuit Assen, with talking points aplenty from the Netherlands. Turn 1 drama, tyre conversation, 2022 prospects, a little bit of character building and even picking a fight with your own motorcycle, it’s all covered in this week’s hot headlines. Catching up with the main protagonists, they revealed all as they debriefed their fifth round of 2021.

Andrea Locatelli: “Maybe we need to sit at the table – with a beer – and talk about next year!”

After a penalty demoted him from the Tissot Superpole Race podium, Andrea Locatelli led for half of Race 2 before ultimately finishing third, giving him plenty to be happy about: “In Race 1 we rode with the SC0; maybe in Race 2, I could’ve done much better. I might have been able to push the front tyre immediately but unfortunately, it is the last five laps that are the hardest to ride. We are so close sometimes. For me, WorldSBK is like MotoGP™; my dream was always to ride in MotoGP™ but now that isn’t possible, so WorldSBK becomes my dream and I love this paddock so much.

“Is my first year in WorldSBK and Yamaha and we get the podium – after just five weekends! It’s so amazing for me! In my mind, it’s time to enjoy a lot, fight more in the race and then with Yamaha, we see in the future. Yamaha is a good family for me so maybe we need to sit at the table – with a beer – and talk about next year!”

Scott Redding (Aruba.it Racing – Ducati) “I'm one for hard racing, I never shy away from a good battle, but…”

Scott Redding made his feelings clear after the Turn 1 drama between Garrett Gerloff (GRT Yamaha WorldSBK Team) and Toprak Razgatlioglu (Pata Yamaha with BRIXX WorldSBK), saying: "I went into Turn 1, Garrett came up alongside me, I braked a bit late, and he broke even later than me. I thought, ‘that isn’t happening. Not a chance’ Are you here to win races or win the first corner? You’re costing yourself the race, and someone else is on the receiving end as well.

“We’re meant to be world-class riders, and it’s hit-and-miss as to whether we get through the first corner. I like Gerloff and I get on with him, but when he puts the helmet on, sometimes I think, ‘what are you doing?’ I'm one for hard racing, I never shy away from a good battle, but I keep it clean and respectful. It can happen, but he just needs to think a little bit.”

Jonathan Rea (Kawasaki Racing Team WorldSBK): “Sometimes, you come away with egg on your face, but we pulled it off”

Having made great progress with the tyres across the weekend, Jonathan Rea hailed the teamwork at KRT on Saturday after using the all-new front SC0 on offer: “I’ve used every slick rear tyre available to me this year. The SCX, the SCX evolution and also the SC0. I was listening to what Scott was saying and it is true that different circuits and different temperatures can have different requests for the bike and the tyre and that’s the biggest influence of the race.

“I did a long run on Friday on the new front and felt quite comfortable. Pere made a plan; Pirelli brought a new front tyre and we ended up with the only bike in Race 1 Parc Ferme with that and it’s a good feeling when you see that you do your homework, and it pays off. Sometimes, you come away with egg on your face, but we pulled it off; the decision was clear-cut.”

A testament to his strength, Tom Sykes’ humour once again prevailed after a difficult Saturday at Assen, whilst also explaining how unlucky he was to just miss out on a fast time: “Saturday here at Assen… I’d put it down to character building. That’s what it was. That’s what Saturday here is. It’s such a shame because we’ve been working on a good base setup on the M 1000 RR. Unfortunately, we had an unbelievably small technical problem at the start of Superpole.

“I don’t know whether it was finally me who let the side down, but the long and short of it is the guys worked unbelievably to swap the fuel tank. When I came in, there were five minutes remaining and I thought there wasn’t a chance. New wheels on, changing the components and away we go. They say I missed the flag by 0.4 seconds. The lap time was good enough for second on the grid, which is promising as that was just my first tyre and didn’t want to make any mistakes. It would’ve been nice to have a second bite at the cherry. The disappointment is the consequence of starting at the back of the grid. Hell’s bells, to be frustrated is an understatement!”

It was fair to say that despite being elevated to the podium following penalties for Toprak Razgatlioglu and Andrea Locatelli in the Superpole Race, Michael Ruben Rinaldi was still bitter on Sunday afternoon after Race 2: “Sincerely, I’m not happy at all. We have proven that when we are good with the bike and I can do my 100%, we are there, so I don’t feel like a rider who finishes eighth and I am upset about that. I’m not happy; this morning [Tissot Superpole Race], I felt good with the bike only for a few laps and for those laps I was able to stay with Jonny. Then, when I don’t have the feeling, we go backwards, and we can’t fix that problem or feeling. We are not consistent at the moment like other riders because if you look at Jonny or Toprak, then they are always there. Maybe I need to improve as a rider in comparison to them, but I am not a rider who finishes eighth, and I’m very disappointed.”

Michael van der Mark (BMW Motorrad WorldSBK Team): “I was testing to see what the limit of the strength of the windscreen was!”

After taking his frustration out on his BMW M 1000 RR in FP3, Michael van der Mark reviewed the issue, whilst also humorously joking about the windscreen incident: “We had an issue with the bike. We thought we fixed it but as you saw, I went out again and we didn’t fix it. I was really frustrated because we had a lot of things to try and also to get into a little bit of a rhythm on Saturday morning is always good. Unfortunately, it didn’t work out. I was testing to see what the limit of the strength of the windscreen was! I must say, I had to hit it twice to break it, so it is quality stuff!”

Watch all the races LIVE and OnDemand with the comprehensive WorldSBK VideoPass!