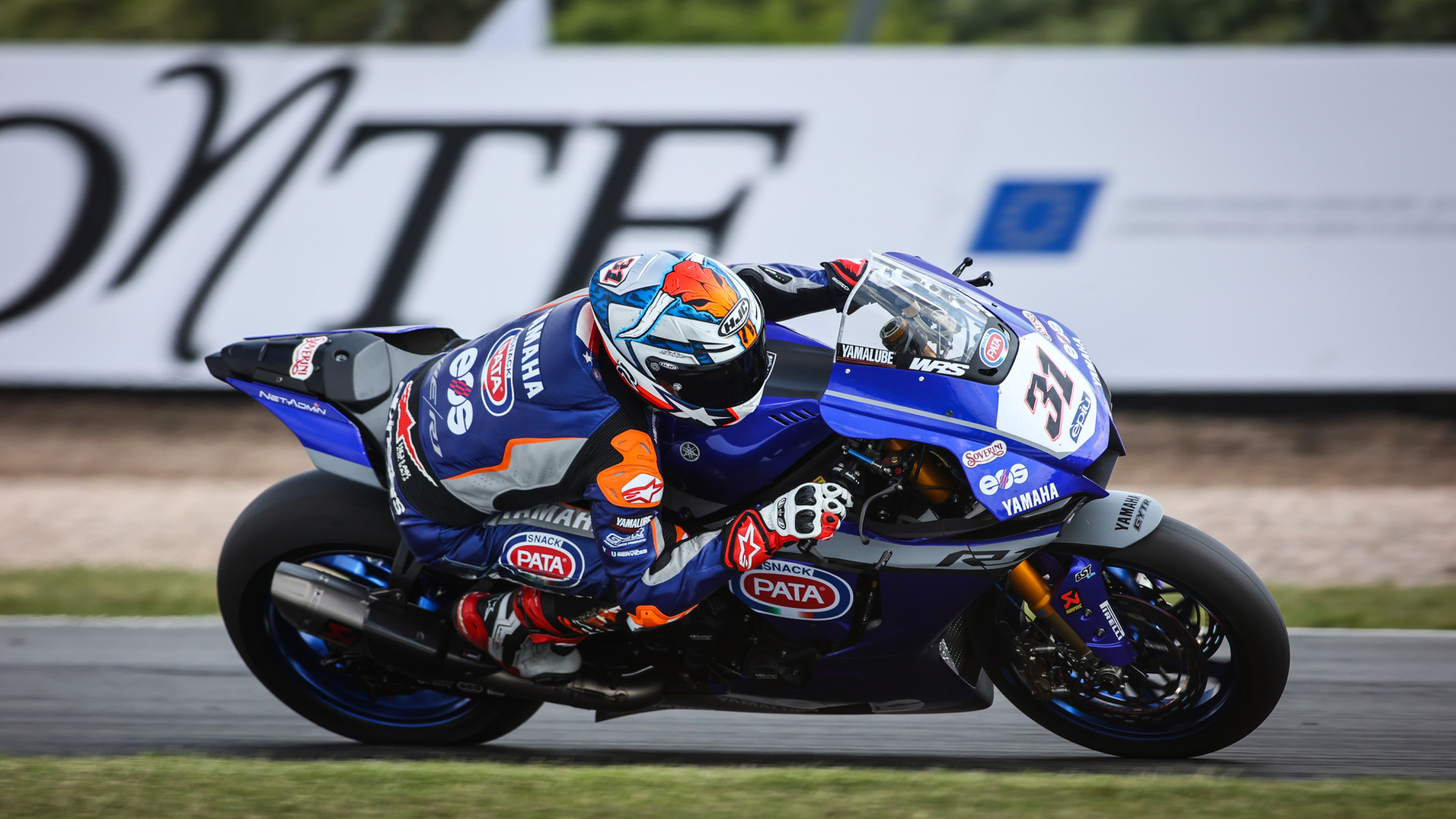 The 2021 MOTUL FIM Superbike World Championship’s opening day of action saw Garrett Gerloff (GRT Yamaha WorldSBK Team) hit the headlines by stunning on his debut at Donington Park for the Prosecco DOC UK Round. He was fastest on a blissfully sunny Friday afternoon, enough to put him on top overall with a 1’27.524, ahead of Jonathan Rea (Kawasaki Racing Team WorldSBK) and Toprak Razgatlioglu (Pata Yamaha with BRIXX WorldSBK).

It was an Independent on top on Friday in the UK as Garrett Gerloff (GRT Yamaha WorldSBK Team) improved significantly throughout the opening day of action to go top on an SCX tyre in the closing stages. An irrepressible Gerloff topped every single sector around the Donington Park circuit, as he made his debut at the British venue. Impressively going about his business at a brand new circuit and less than a week after a solid substitute performance at the Dutch GP in MotoGP™, Gerloff hopes to continue his form into Saturday and Sunday. On the other side of the garage, it was a nightmare for Kohta Nozane, who was ruled unfit following his Navarra testing crash which left him with a fractured middle finger on his right hand.

The Kawasaki Racing Team WorldSBK duo of Jonathan Rea and Alex Lowes enjoyed a positive session, as both riders hit the ground running right from the start of the session. Both riders were running 1-2 in the session in the opening 20 minutes as they continued their work at their home round. Rea was super consistent throughout the opening day and ended the day in second place, whilst Lowes was also in fine form in the afternoon to finish fourth, leaving him on the combined.

NEW DEAL, SAME CONTENTION: Razgatlioglu on fire, Ducati in behind

The factory Yamaha charge was led by Toprak Razgatlioglu (Pata Yamaha with BRIXX WorldSBK), as he celebrated a new Yamaha Motor Europe contract that was announced prior to the first track action of the day. Despite a massive moment in the opening moments of the session, he was able to continue on his way and cement his position in the leading positions in third, putting in a long run in his second stint. Teammate Andrea Locatelli was impressive and was as high as fourth in the afternoon session before finishing eleventh overall.

It was the Aruba.it Racing – Ducati outfit who were also in contention, with home-hero Scott Redding debuting in front of his home fans in WorldSBK, finishing the day in fifth overall as he adapted to WorldSBK machinery at the circuit of which he won his first ever World Championship race at in 2008 in 125cc Grand Prix. Michael Ruben Rinaldi (Aruba.it Racing – Ducati) finished sixth in the afternoon session but was seventh overall as he also aimed to make a solid start after his double win at Misano last time out.

BMW AND HONDA: in hot pursuit

Finishing in sixth overall was Tom Sykes (BMW Motorrad WorldSBK Team), as he endured a busy day at Donington Park. A crash in FP1 at the Melbourne Loop (Turn 11) left Sykes unscathed but he suffered a faster crash in the opening five minutes of FP2, leaving him out at McLean’s (Turn 7). He rejoined the session later on but relied on his morning time to put him sixth, whilst teammate Michael van der Mark had a rather unassuming day at Donington Park – the site of his first WorldSBK win – as he completed the day in tenth overall.

Over with Leon Haslam (Team HRC) and teammate Alvaro Bautista, it was the ‘Pocket Rocket’ who was on-song as he put the Honda CBR1000RR-R inside the top ten at his local circuit. Across the box and it was Alvaro Bautista who seemingly struggled to get up to speed on Friday, having a very quiet day outside of the top ten. Come the close of business on Friday, it was Haslam who finished eighth with Bautista in 15th.

THE (REST OF THE) INDEPENDENTS

With Gerloff on top, the rest of the Independent riders were further down but after following Jonathan Rea for a few laps, it was once again Lucas Mahias (Kawasaki Puccetti Racing) who was the next best in ninth, whilst Chaz Davies (Team GoEleven) could only manage 12th, ahead of Axel Bassani (Motocorsa Racing) and Tito Rabat (Barni Racing Team), with the three Independent Ducatis together. Isaac Viñales (ORELAC Racing VerdNatura) was 16th ahead of a solid Luke Mossey (OUTDO TPR Team Pedercini Racing) and Germany’s Jonas Folger (Bonovo MGM Racing). Eugene Laverty (RC Squadra Corse) completed 21 few laps in the day as he was blighted by tech issues in 19th ahead of Christophe Ponsson (Alstare Yamaha) and Loris Cresson (OUTDO TPR Team Pedercini Racing).

Watch all of the action unfold and get involved on social media using #GBRWorldSBK and the WorldSBK VideoPass!