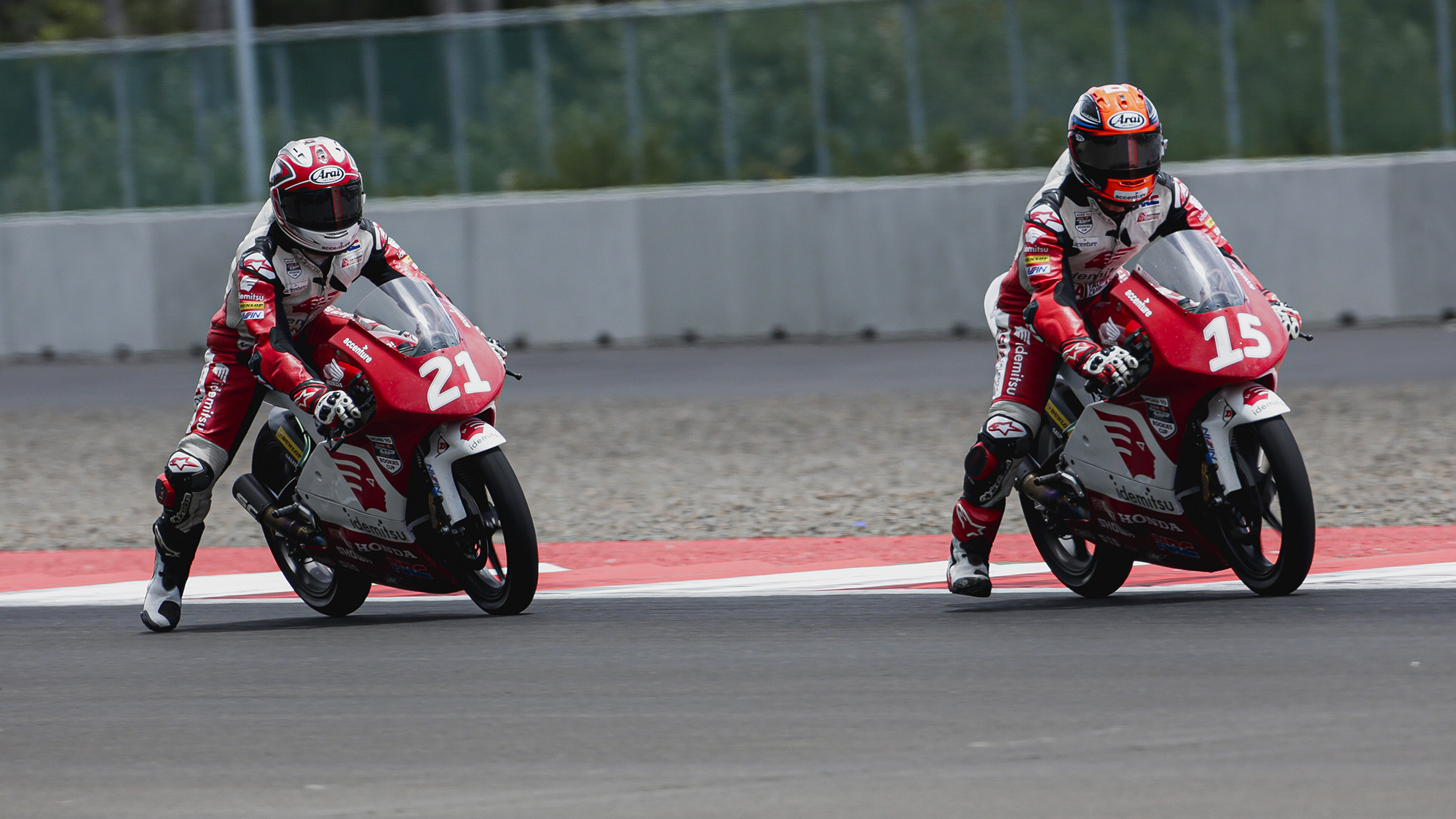 The Japanese rider secures the crown in style, taking his sixth win in six after another duel vs Danial Sharil

Taiyo Furusato has officially hit the competition for six in 2021. The Japanese rider opened the season with a stunning four victories from four in the first two rounds at the Qatar and Doha Grands Prix, and the winning streak continued in Race 1 at Mandalika. That set the number 15 up with his first match point in the 2021 Cup, and he wrapped up the crown in style: with a win. Six races and six victories make him the 2021 Idemitsu Asia Talent Cup winner!

Once again, however, he was pushed all the way by Danial Sharil as the two put on another spectacular duel - all the way to the final lap. But Furusato stayed cool under pressure and found an answer to come out on top, with Danial Sharil forced to settle for second. Once again, Gun Mie completed the podium as he proved the only rider able to go with the two at the front.

At lights out, Danial Sharil held the hole shot and it was another clean getaway for the field, but the breakaway began early: the Malaysian put the pedal to the metal to start making a gap, with only Furusato and Mie able to tag on and hunt him down. That left a huge group fight behind and a trio in the lead.

At one point Danial Sharil had nearly a second in hand, but the two on the chase were able to reel the Malaysian back in to create another as-you-were. Mie was hanging in there too, the Japanese rider still close as the final lap began.

Onto that last lap, Furusato led Danial Sharil and forced the Malaysian to take to the outside, the number 15 holding firm and the number 21 suffering a small twitch too. They stayed glued together until the next key chance, Turn 10, and this time Danial Sharil chose the outside, looking for the switchback. But he couldn't quite make it stick, instead lining up another attack through 12 and 13 and making it through - briefly. But Furusato answered straight back and sliced up the inside, the number 15 then able to keep the door firmly shut and stay ahead on the drag to the line, taking win six of six.

Danial Sharil was forced to settle for second and will be gunning to convert race his last chance at the top step on Sunday, with Mie losing some ground on the final lap after a big wobble behind the leading duo.

The huge group fight behind split into some different battles by the flag, with Masaya Hongo beating Carter Thompson and Herjun Firduas in a three-way fight for fourth. Tetsuya Fujita had a lonelier finish in P7, ahead of another close trio completing the top ten: wildcard Reykat Fadillah, Rei Wakamatsu and Herlian Dandi, with Sharul Sharil just missing out in P11.

That's a wrap on a shorter Saturday than expected after the weather moved in, and it's also a wrap on the fight for the crown. Taiyo Furusato has had as close to perfect a season as possible so far and is the 2021 Idemitsu Asia Talent Cup winner - can he make it a clean sweep on Sunday? Tune in at 12:30 (GMT +8) local time to find out!