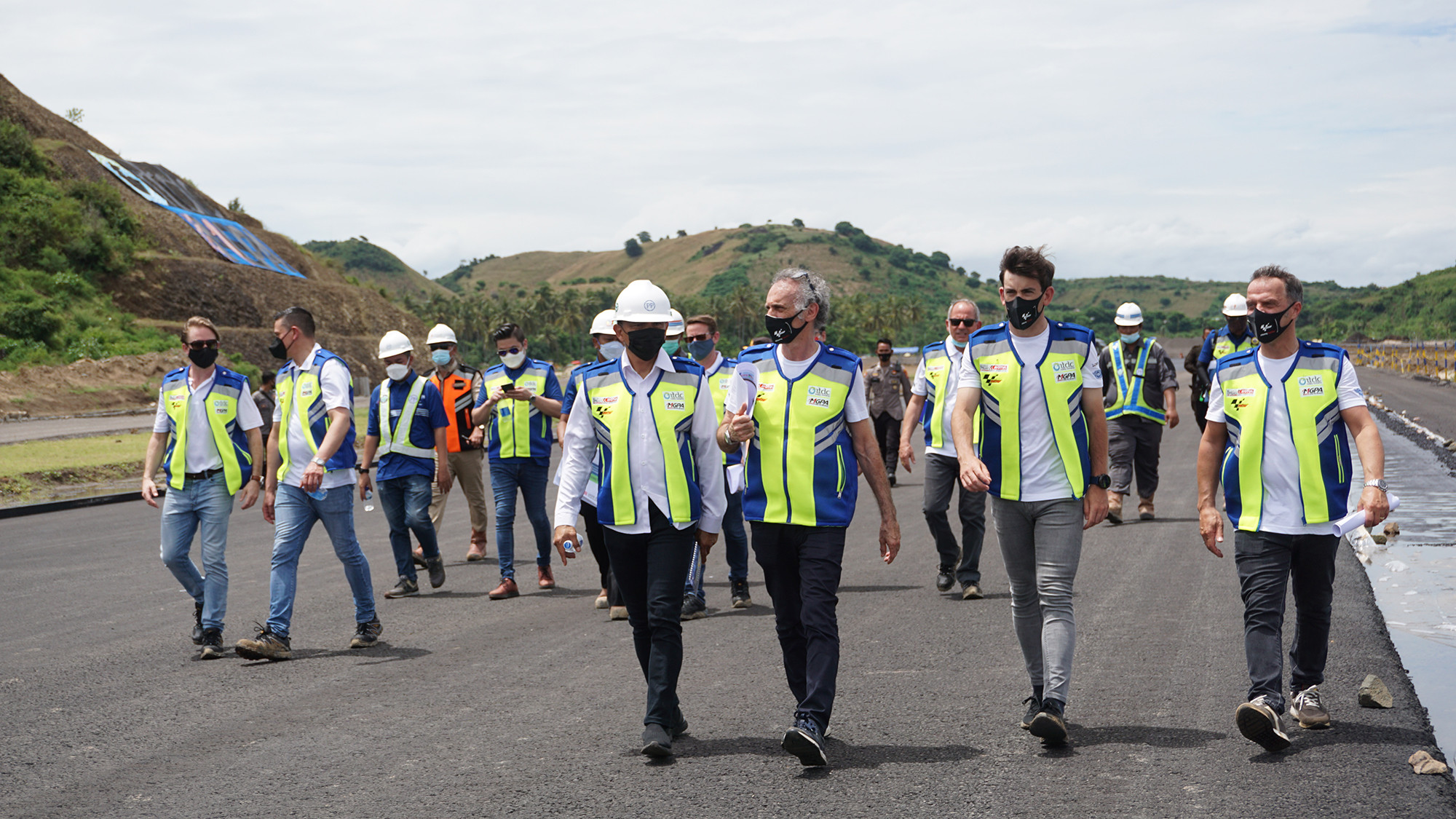 The new Indonesian track, on the Island of Lombok, is on course to welcome WorldSBK and MotoGP™

Following the TISSOT Grand Prix of Doha, representatives from the Fédération Interna-tionale de Motocyclisme (FIM) and Dorna Sports have undertaken an inspection of Man-dalika International Street Circuit on Wednesday, 7th of April 2021. The visit to Lombok, where the circuit is under construction, was made by FIM Grand Prix Safety Officer Fran-co Uncini, Dorna Race Direction Representative Loris Capirossi and Dorna Sports Manag-ing Director Carlos Ezpeleta in order to assess the progress made on the remarkable site.

During the inspection process, the representatives of the FIM and Dorna Sports, who were welcomed by President Director of PT Pengembangan Pariwisata Indonesia (Persero) or Indonesia Tourism Development Corporation / ITDC Abdulbar M. Mansoer and Chief Executive Officer (CEO) of Mandalika Grand Prix Association (MGPA) Ricky Baheramsjah, were impressed by the evolution of the project as well as the safety standards implemented.

The target remains for the new Mandalika International Street Circuit to host the MOTUL FIM Superbike World Championship on the 14th of November 2021. However, due to the ongoing COVID-19 pandemic, all parties involved agreed to hold the first FIM MotoGP™ World Championship Grand Prix at the track in the first part of the 2022 season, in principle during March.

However, if MotoGP™ is able to hold events in South East Asia towards the end of 2021, efforts will be made to undertake a possible test of the MotoGP™ Class Teams at Man-dalika International Street Circuit during that time period in anticipation of the track’s inclusion on the calendar in 2022.

Indonesia State-Owned Enterprises Minister Erick Thohir stated, “I fully support the Mo-toGP™ event to be held in March 2022. This is in line with the Indonesian government’s accelerated national vaccination program. We want to guarantee the safety of both domestic and international visitors.”

President Director of ITDC Abdulbar M. Mansoer stated, “We thank FIM and DORNA for coming and conducting the technical visit which went well and met their expectations. By knowing the firm month for MotoGP:tm: event, we are assured of focusing on finish-ing the Mandalika International Street Circuit development project, while also maximiz-ing the value that this world class sporting event has to offer.”

"The visit to Lombok was very successful and we can confirm that the Mandalika Interna-tional Street Circuit will be one of the most important venues of the calendar in the future and WorldSBK this current season. We also know that the fans from Indonesia will attend massively and the GPs will become one of the most iconic ones of the whole season. Indonesia is a key market, not only for Dorna but for all the stakeholders of the Championship", commented Carmelo Ezpeleta, Dorna CEO.