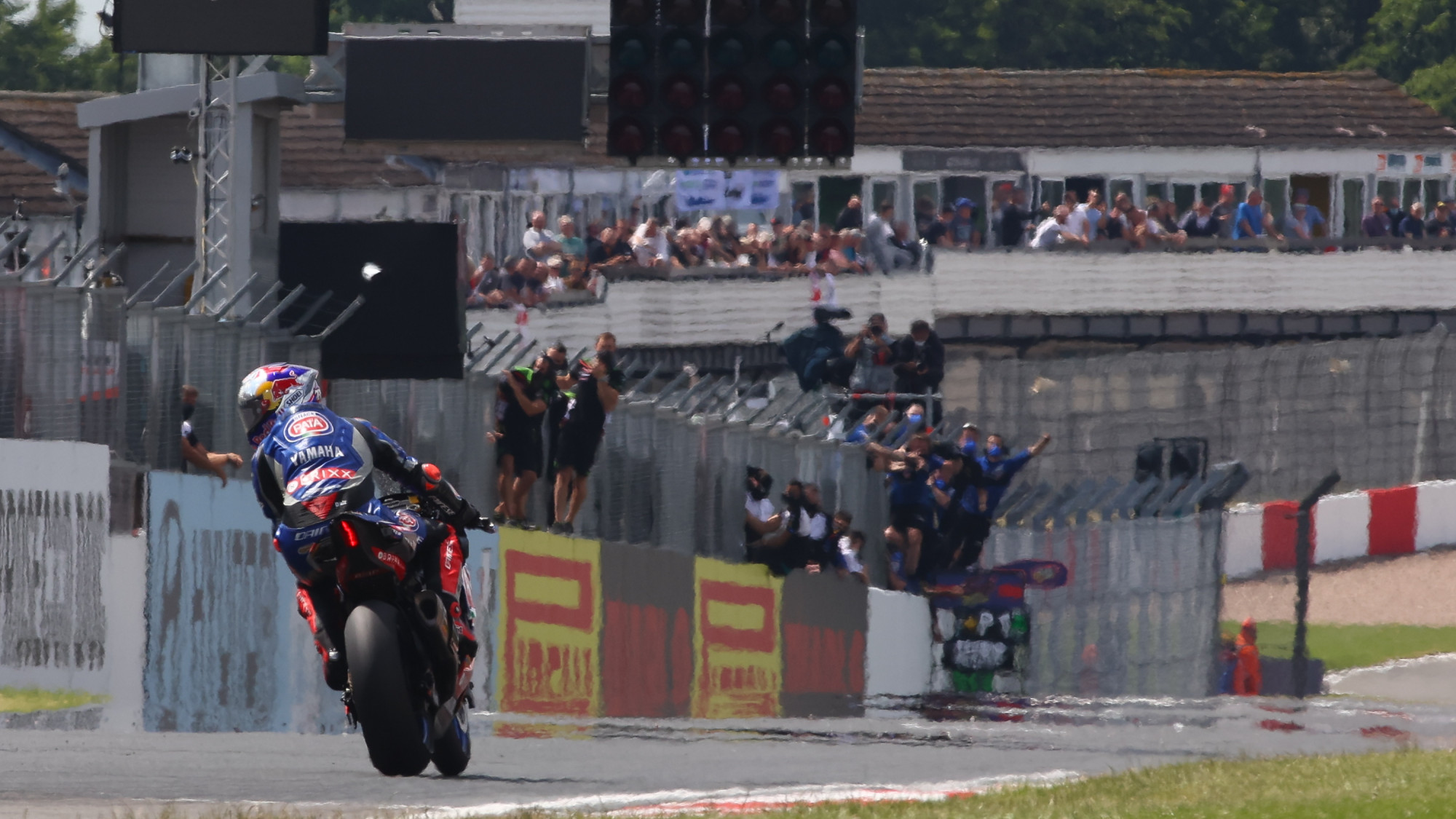 A stunning first lap that was reminiscent of Ayrton Senna in 1993 at Donington Park from Toprak Razgatlioglu (Pata Yamaha with BRIXX WorldSBK) as he secured his second victory of the 2021 MOTUL FIM Superbike World Championship. Starting from 13th place and finding himself in the lead of the race on just the second lap of Race 1, he made his progress count at the Prosecco DOC UK Round at Donington Park.

LIGHTS OUT AND TOPRAK MAKES MOVES

Jonathan Rea (Kawasaki Racing Team WorldSBK) led the field away from pole position but it was Razgatlioglu who caught the eye at the start, moving from 13th to fifth by Turn 1 and up to second by the end of Lap 1. It did not take long for Razgatlioglu to take the lead of the race as he passed the six-time Champion on the second lap.

A rare error from Rea on Lap 3 allowed Razgatlioglu to build up a gap of three seconds ahead of Rea as he looked to close the gap even further in the standings; Razgatlioglu’s victory allowing him to close the gap to just 15 points in the Championship. Victory for the Turkish star means WorldSBK’s streak of wins coming in pairs continues, a run that started at the start of the 2021 campaign. Rea had looked to close in on Razgatlioglu throughout the race after recovering from his trip through the grass on Lap 3 at Turn 2, but a save at Turn 1 meant he lost even more time to the race leader.

Another race, another taxi

This time in a different form!

THE BATTLE FOR THIRD

Behind the two leaders who had broken away, an epic battle for third was brewing between Michael van der Mark (BMW Motorrad WorldSBK Team), teammate Tom Sykes, Alex Lowes (Kawasaki Racing Team WorldSBK) and Garrett Gerloff (GRT Yamaha WorldSBK Team). Van der Mark was running in third place and looked to make a move on Rea for second after his trip through the grass, but found the reigning Champion pulling way while Sykes started closing in at the front of the chasing group.

As Sykes closed in on his teammate, Lowes was on the rear of Sykes’ M 1000 RR as both he and van der Mark searched for BMW’s first podium with the new bike. Lowes made his move at Melbourne Hairpin on Sykes to move up the order, while the two BMWs were battling, with van der Mark falling down the order behind Lowes and Gerloff.

Sykes and van der Mark both gained a position when Gerloff came off his Yamaha YZF R1 at the final corner on his own, with the American able to remount his bike and fight back to finish in seventh. It meant Lowes claimed third place after the titanic battle ahead of the BMW duo of Sykes and van der Mark; with two BMWs finishing inside the top five.

Right after step to the 3rd position he crashes#RiderOK#GBRWorldSBK pic.twitter.com/sgJumGicH7

Leon Haslam (Team HRC) came home in sixth place ahead of Gerloff after the American’s crash, with Gerloff 16s back from the British rider ahead of Alvaro Bautista (Team HRC) in eighth, who was passed by Gerloff during the American’s fightback. Lucas Mahias (Kawasaki Puccetti Racing) put in a solid race to come home in ninth place. The lead Ducati in the race was Axel Bassani (Motocorsa Racing) who completed the top ten after yet another impressive performance from the youngest rider on the 2021 WorldSBK grid. Chaz Davies (Team GoEleven) came home in 11th as he searches for his 100th WorldSBK podium, finishing four seconds behind Bassani.

Scott Redding (Aruba.it Racing – Ducati)’s home race came to an early end after he crashed at Turn 4, with Christophe Ponsson (Alstare Yamaha) following him at the same corner not long after; both riders retiring from the race. Andrea Locatelli (Pata Yamaha with BRIXX WorldSBK) was another retirement after he suffered a huge crash on Lap 7 of the race although the Italian was able to walk away. Spanish rider Tito Rabat (Barni Racing Team) suffered from a technical issue on Lap 14 that forced him out of the race. Jonas Folger (Bonovo MGM Action) retired from the race after being lapped by race winner Razgatlioglu.