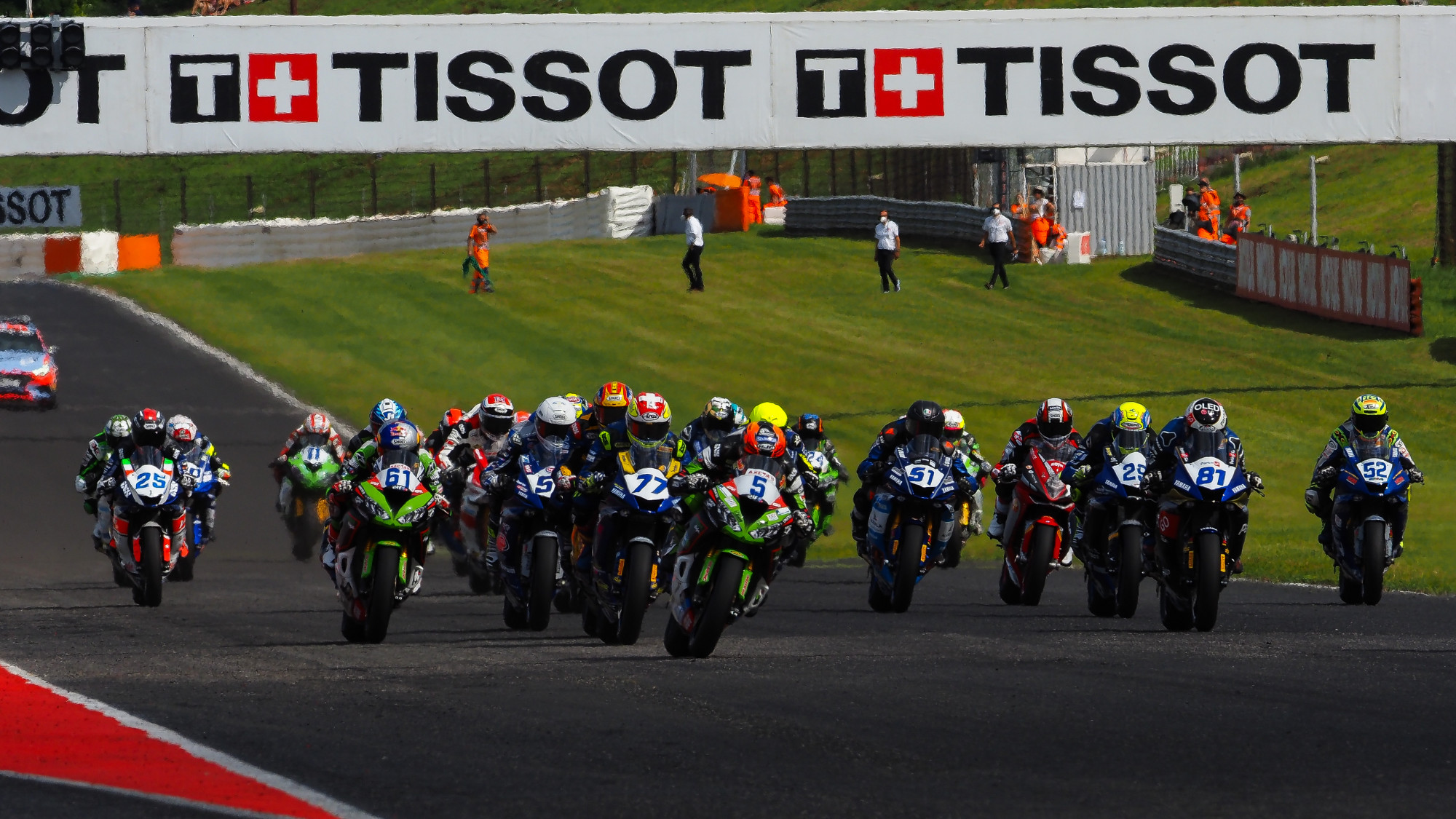 Two weeks on from the FIM Supersport World Championship’s first visit to the Autodrom Most, another new venue presents more challenges for the paddock as the Circuito de Navarra prepares to host WorldSSP for the first-ever time with the Pirelli Navarra Round making its debut on the calendar. New tracks have the potential to spice things up and with the Championship gap being cut last time out, the Navarra Round is set up to be a thrilling encounter.

GAME ON IN THE CHAMPIONSHIP

Dominique Aegerter (Ten Kate Racing Yamaha) continues to lead the standings after five rounds but found his gap at the top of the Championship to 37 points, down from 44 before the Czech Round, after Steven Odendaal (Evan Bros. WorldSSP Yamaha Team) was able to return to the top of the rostrum in Race 1 at the Autodrom Most with Aegerter in fourth; although Aegerter responded in Race 2 to win ahead of Odendaal.  A new venue could spice this Championship battle even more. Will Aegerter extend his lead at the top of the standings or will Odendaal close the gap even further?

German rider Philipp Oettl (Kawasaki Puccetti Racing) lies third in the Championship after taking yet another podium finish last time out, but is still chasing his first win in the class. Oettl is only 33 points behind Odendaal as he searches to finish as high up the Championship as possible. Oettl will be looking over his shoulder though with Manuel Gonzalez (Yamaha ParkinGo Team) only 17 points behind.

The 19-year-old Spanish rider claimed his first WorldSSP podiums at the Autodrom Most and narrowly missed out on a potential first victory as he closed down Odendaal in Race 1; the duo separated by four tenths when Red Flags were shown. Gonzalez will be hoping he can go one better at the Navarra Round and claim his first victory.

The fight for third is a close affair with Sammarinese rider Luca Bernardi (CM Racing) two points behind Gonzalez after a stunning debut campaign in WorldSSP, although he is currently on a four-race podium drought; claiming three top-six finishes across the Dutch and Czech Rounds. Bernardi will be hoping he can return to the podium at the Navarra Round.

A DIFFICULT 2021 CAMPAIGN SO FAR

Jules Cluzel’s (GMT94 Yamaha) campaign so far has been marred with challenges and bad luck, including last time out when he was collected by Kevin Manfredi (Altogo Racing Team) at Turn 1 on the second lap of the race. Despite this, Cluzel sits sixth in the standings on 100 points with three podiums to his name so far: MotorLand Aragon, Circuito Estoril and Misano World Circuit “Marco Simoncelli”. Cluzel will be hoping he is able to make it a fourth podium visit at a fourth circuit in the 2021 campaign.

Danish rider Simon Jespersen will make his WorldSSP debut with Kallio Racing in place of the injured Hannes Soomer, becoming the fourth rider from Denmark to compete in WorldSSP. Jespersen currently competes in the Spanish supersport championship and sits third in the classification with the Danish rider claiming podium finishes this season and has achieved one pole position during the season, being only 30 points behind the leader.

Danny Webb announced his split with the WRP Wepol Racing outfit, and he will be replaced by David Sanchis Martinez at the team, who will also make his WorldSSP debut at Navarra. The Spanish rider has competed in endurance racing in 2021 and made his debut on a superstock bike at the 24 Hours of Le Mans.

WorldSSP Challenge competitor Maria Herrera (Biblion Iberica Yamaha Motoxracing) will be hoping to return to action but will need to undergo a medical check before she is cleared to ride. The team ran with Federico Caricasulo last time out at the Autodrom Most and he will return as a one event rider for the same team. Marc Alcoba (Yamaha MS Racing), Shogo Kawasaki (G.A.P. MOTOZOO Racing by Puccetti), Galang Hendra Pratama (Ten Kate Racing Yamaha) and Christoffer Bergman (Wojcik Racing Team) will also all need to undergo medical checks before racing at Navarra.

Follow all the action from the Circuito de Navarra using the WorldSBK VideoPass!