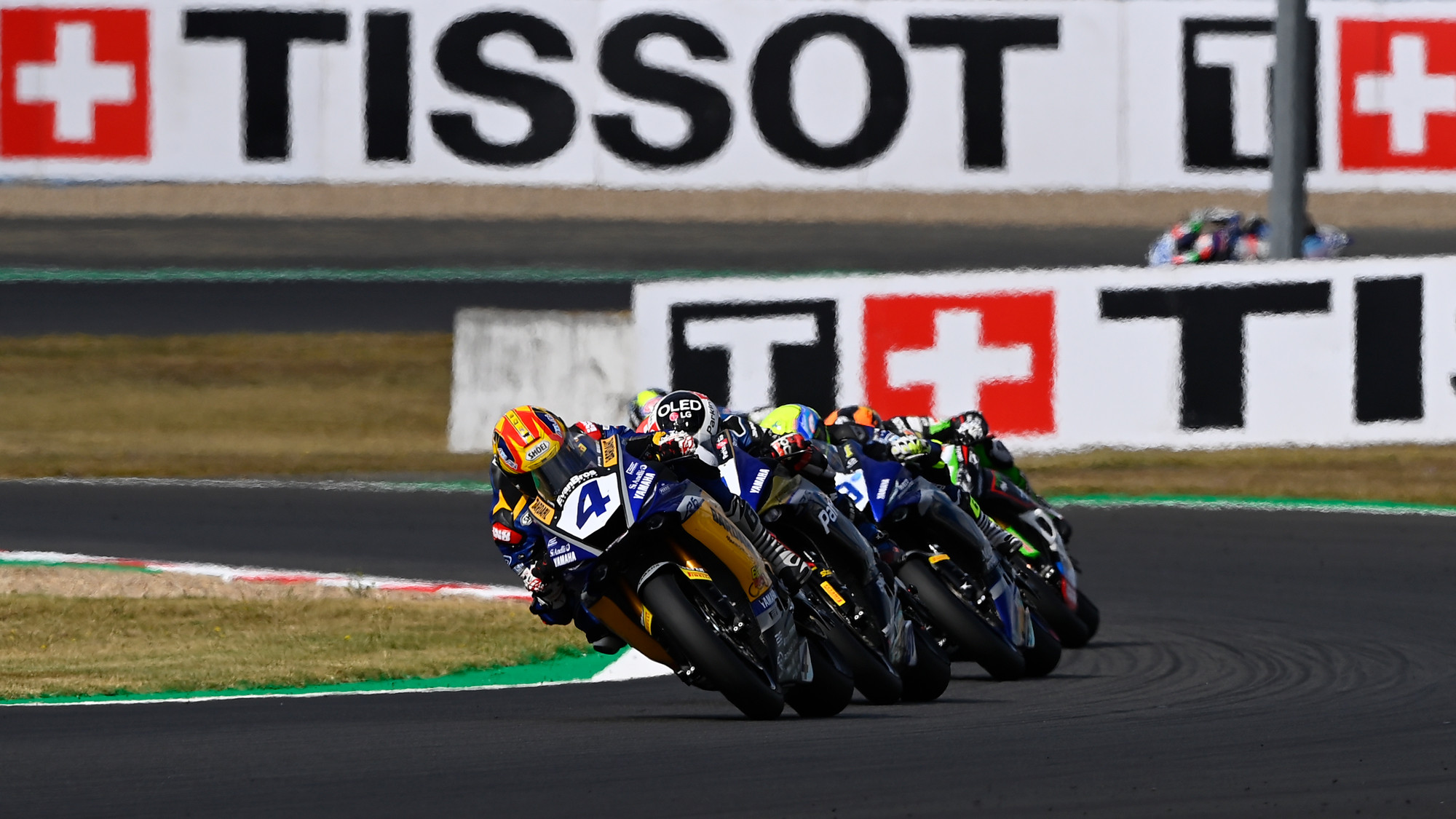 With the Championship leader not in action, things could tighten up at the top of the standings at the close of the weekend…

The 2021 FIM Supersport World Championship thunders into Spain for the third time this season as the Hyundai N Catalunya Round beckons at the Circuit de Barcelona-Catalunya. With Championship leader Dominique Aegerter (Ten Kate Racing Yamaha) missing the event due to his MotoE™ World Cup commitments, there’s a land of opportunity for his rivals to peg him back in the title race and get themselves back into contention. 62 points split him with second-placed Steven Odendaal (Evan Bros. WorldSSP Yamaha Team), so the Swiss rider will lead the standings regardless after the round, but what will the amount be?

TIME TO CAPITALISE: can Aegerter’s opposition make hay whilst he’s away?

With Aegerter’s absence, , attention turns to Steven Odendaal, with the South African coming into this round after a tricky Magny-Cours, where he came from the fourth row of the grid to finish on the podium in Race 1 and sixth in Race 2. With Aegerter beaten in Race 2 at Magny-Cours – albeit not by Odendaal – it will revitalise Odendaal and the rest of the competition as the quest for World Supersport glory continues. Odendaal took a double top six result at Catalunya in 2020, but he’ll have his sights firmly set on a double win.

Third in the Championship and a further 62 points back is Philipp Oettl (Kawasaki Puccetti Racing), with the German being slightly underwhelming in the last couple of events – although he was denied a podium at Magny-Cours by teammate Can Öncü; Oettl was on the podium at Catalunya in 2020, so expect a return to the fore for him. With the in-form young Sammarinese prospect Luca Bernardi (CM Racing) out through injury, Manuel Gonzalez completes the top five in the standings and comes into the triple headers off the back of his first win of his career in WorldSSP at Magny-Cours, as well as his second appearance in the Moto2™ World Championship. Three points behind Bernardi and 20 behind Oettl, the fight for third in the Championship is well and truly alive.

BEHIND THE TOP FIVE: the fight’s alive

Lying sixth is Jules Cluzel (GMT94 Yamaha) and the Frenchman will be keen to be back at the front after his heavy fall with Aegerter and Bernardi at the start of Race 2 at Magny-Cours. Making his first racing appearance at Barcelona-Catalunya since 2010 and his Moto2™ days, Cluzel does at least have some prior testing at the track on the R6 Yamaha. He’s some 37 points ahead of the next rider, ex-teammate and title rival Federico Caricasulo (Biblion Iberica Yamaha Motoxracing), with the Italian gradually growing stronger and back to his old self as the season progresses.

With his first ever World Supersport podium catapulting him up the order, Turkey’s Can Öncü is eighth in the standings. Just the third-youngest podium finisher in the class, fellow countryman ex-racer and WorldSSP legend Kenan Sofuoglu stated that “this is the beginning” of something bigger for Öncü, and the Turkish rider will now hope the first rostrum brings prosperous consistency. He is six points clear of Randy Krummenacher, who replaces Luca Bernardi at CM Racing this weekend and who also makes his Catalunya WorldSSP race debut this weekend and was quick in preseason testing at the venue. Completing the top ten is Raffaele De Rosa (Orelac Racing VerdNatura), with the Italian keen for more top ten consistency.

FURTHER BACK: the riders you can’t discount and some housekeeping

Other notable names that will be keen to make an impression will be Niki Tuuli (MV Agusta Corse Clienti), after a fifth place at Magny-Cours gave him his best result of the season. Andy Verdoïa (GMT94 Yamaha) became the youngest ever World Supersport race winner at Catalunya last year and will hope that his strong showing at Magny-Cours will be the springboard he needs to have another good Catalunya Round. Kallio Racing’s Hannes Soomer will also be aiming for a return to the top ten after scoring points on his return from injury in France.

There’s a fair bit of housekeeping to do ahead of the event; Cluzel being subject to fitness is the first, whilst Dominique Aegerter’s replacement will be Denmark’s Simon Jespersen. Marc Alcoba (Yamaha MS Racing) is scheduled to be back after being declared unfit at Most, whereas Shogo Kawasaki (G.A.P MOTOZOO by Puccetti) and teammate Michel Fabrizio need to be declared fit too. One new rider for the weekend will be Australia’s Billy Van Eerde (IXS-YART Yamaha), making his World Supersport debut with support from MotoGP™ GP winner and factory Ducati rider, Jack Miller.

Watch the whole weekend unfold LIVE and OnDemand wherever you are with the WorldSBK VideoPass!