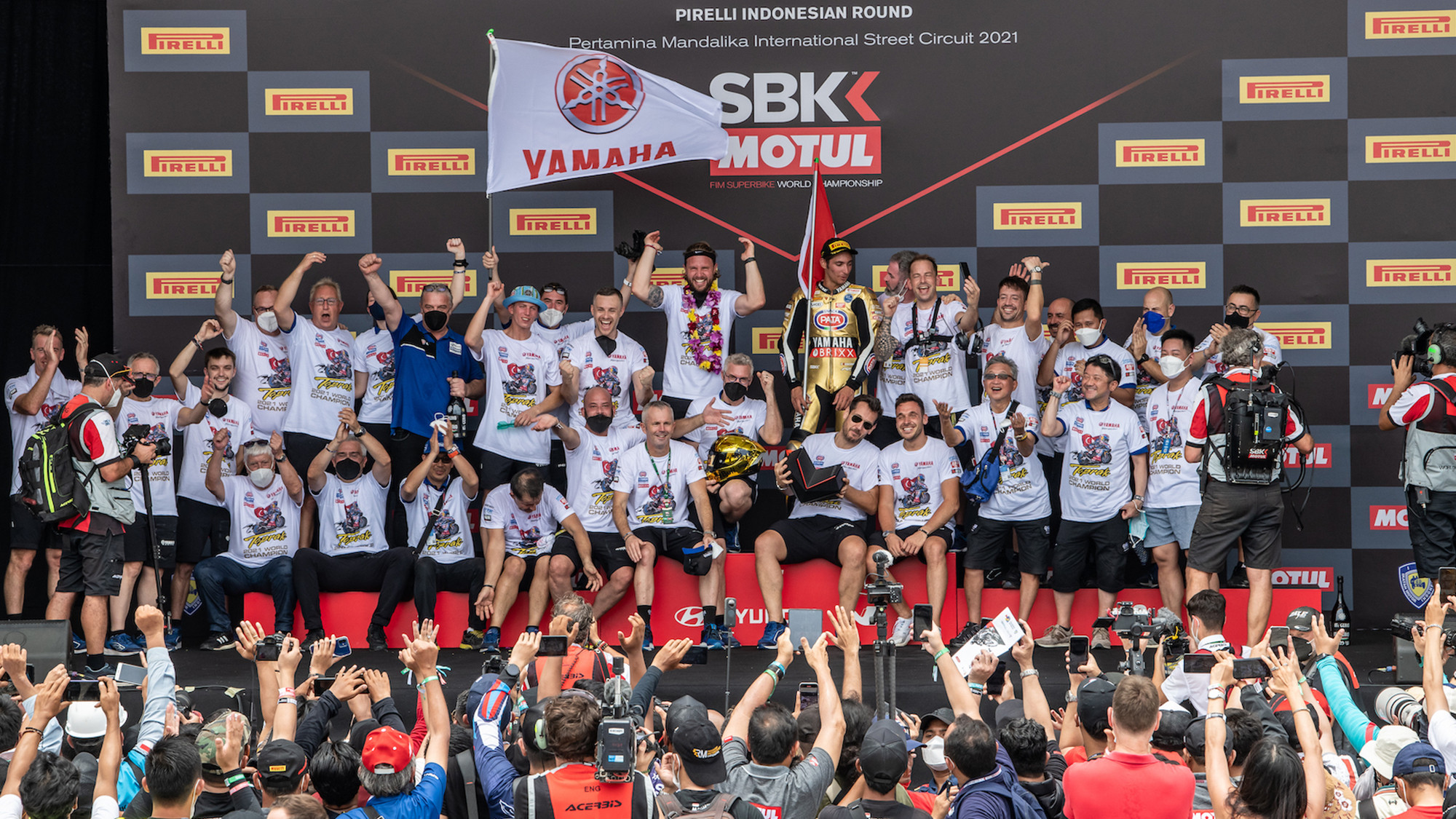 The 2021 season ended with three titles heading to Yamaha after claiming the Riders’, Teams’ and Manufacturers’ Championship in WorldSBK

It has been a long wait for Yamaha to celebrate success in WorldSBK, with their last Manufacturers’ Championship coming in 2007 when they beat Honda by just 28 points after a 25-race season. The 2021 success came after a three-way battle for the majority of the season between Yamaha, Ducati and Kawasaki; although Kawasaki dropped out of contention following the Tissot Superpole Race in Indonesia being cancelled. Yamaha’s success ended Kawasaki’s run of six consecutive Manufacturers’ titles in WorldSBK, a run that started in 2015 and ended a 14-year wait for Yamaha.

With one rider from each manufacturer scoring points towards the Manufacturers’ Championship, Yamaha counted on Toprak Razgatlioglu (Pata Yamaha with Brixx WorldSBK), Andrea Locatelli (Pata Yamaha with Brixx WorldSBK), Garrett Gerloff (GRT Yamaha WorldSBK Team) and Kohta Nozane (GRT Yamaha WorldSBK Team) in contributing to their 607 points in 2021, beating Ducati by just 14 points at the end of the 37-race campaign. It meant Yamaha’s 14-year wait for their second Manufacturers’ title was over in a season where they won all three titles in WorldSBK.

Incredibly, the podium count had one podium between all three manufacturers: once again, Yamaha and Kawasaki were tied at the top with 35 podiums each while Ducati claimed 34 throughout 2021. Yamaha’s tally was contributed to by Razgatlioglu, Locatelli and Gerloff with the American adding two podiums, while Kawasaki only featured two riders on the podium: Rea and teammate Alex Lowes. Five riders claimed podiums for Ducati: Redding and Rinaldi were the highest-scoring podium finishers for the Bologna manufacturer, but Chaz Davies (Team GoEleven), Axel Bassani (Motocorsa Racing) and super-sub Loris Baz (Team GoEleven) all added to the tally.

It helps to wrap up an incredible year of action for Yamaha in motorcycle racing around the globe, having claimed three titles in WorldSBK as well as the Riders’ Championship in MotoGP™ with Fabio Quartararo. The success continues at a national level too, claiming titles in the United States, Great Britain and Japan.

Relive all the incredible action from an unforgettable 2021 season using the WorldSBK VideoPass!