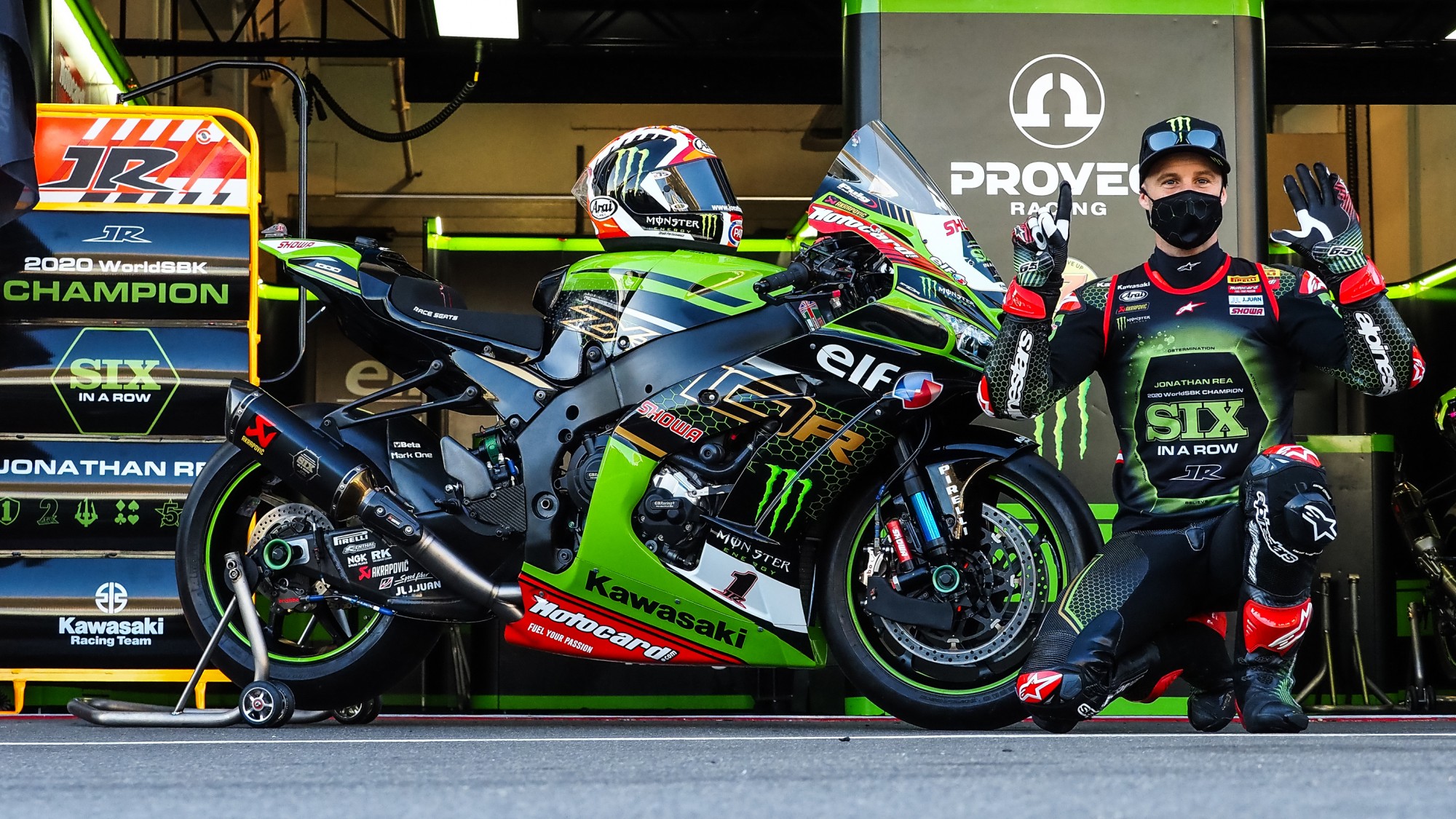 Jonathan Rea (Kawasaki Racing Team WorldSBK) has secured his sixth World Superbike world title in the last Round of the 2020 season after a spectacular performance at the Circuito Estoril as the Northern Irishman continues to write and re-write the MOTUL FIM Superbike World Championship history books.

13 years after he arrived in World Superbike, having won more titles and races than anyone in the history of the Championship, the rider from Ballymena (Northern Ireland) has continued to increase the era of his dominance in the premier class with a new crown in the 2020 campaign. At 33, Rea has once again demonstrated that his ambition, talent and resources have no borders or limits in sight.

And this, despite the fact that the 2020 season started as one of the most contested in recent years, both due to the number of rivals capable of winning races - something that has been confirmed throughout the season - and due to the vigorous competitiveness of all manufacturers. Also, even though the competition was dramatically interrupted by the coronavirus pandemic and condensed by the same circumstance to eight rounds of maximum intensity.

The start at Phillip Island already set the trend for the season by offering three different winners and two Championship leaders, Toprak Razgatlioglu (PATA YAMAHA WorldSBK Official Team) and Rea's teammate Alex Lowes. The Northern Irishman, for his part, started the campaign by winning the Tissot Superpole Race of the Australian Round.

Then the global epidemic of COVID-19 would fall like a blow, which put all competitive activity on standby for almost five months and completely upset the originally planned calendar. The uncertainty and the long wait finally ended with the resumption of the Championship at the Jerez circuit, where Scott Redding (ARUBA.IT Racing - Ducati) shone with special intensity. The English rookie presented his challenge with two victories and a second place that placed him as the new Championship leader, with a 24-point advantage. Rea limited damage at the Andalusian track with a new victory in the Tissot Superpole Race.

The Northern Irishman's reaction came in a thunderous way at the next round, at the Portimao circuit, another recurring talismanic scenario for the Kawasaki rider. The five-time champion's coup of authority came with three dominating victories between Saturday and Sunday, an astonishing hat-trick that gave him the Championship lead for the first time in 2020 and a slim 4-point lead over Redding.

The MotorLand Aragon layout was later the scene of an unprecedented double call-up on consecutive weekends. The fight for the title between the two most prominent contenders intensified over six races, although other protagonists were interspersed among them, such as Michael Rubén Rinaldi, who debuted as a WorldSBK winner in the Teruel Round, or Chaz Davies, who fought for victories and exhibited a return to his best form. Redding won the Aragon Race 1 and the Teruel Superpole race, but he was more inconsistent and dropped more points. The Northern Irishman at Kawasaki had three victories but also achieved consistent results when he failed to win. At the end of those two weeks, Rea had extended his lead to 36 points.

At the Catalunya Round, Rea had to share the victories with two other winners, Chaz Davies and Michael van der Mark, but his victory in Race 1 and again his consistency over the weekend allowed him to extend his lead over Redding to 51 points and reaching Magny-Cours with a chance to win the title at Round 7. However, although he won the first two races in France, the reaction of the Ducati duo in Race 2, with the triumph of Scott Redding and the third place of Chaz Davies, meant the title would be decided at the season finale in Estoril.

With a 59-point lead, Rea had everything going for him to complete his mission in Estoril, and on Saturday he brilliantly conquered his new world title in a setting unheard of for the current generation of WorldSBK.

Despite the arrival of new rivals and the emergence of a new generation of pilots, despite the change in calendar format that the health crisis forced; despite everything, the era of Rea continues to expand. In 2020 he has achieved a previously unthinkable milestone, the sixth consecutive world title, and is already close to 100 career victories, achievements never before achieved in this Championship. A success without borders or limits, only within the reach of the one who is already the best WorldSBK rider in history.

Congratulate Jonathan Rea via social media with the hashtag #Rea6 and celebrate the best moments of his new title with the WorldSBK VideoPass.