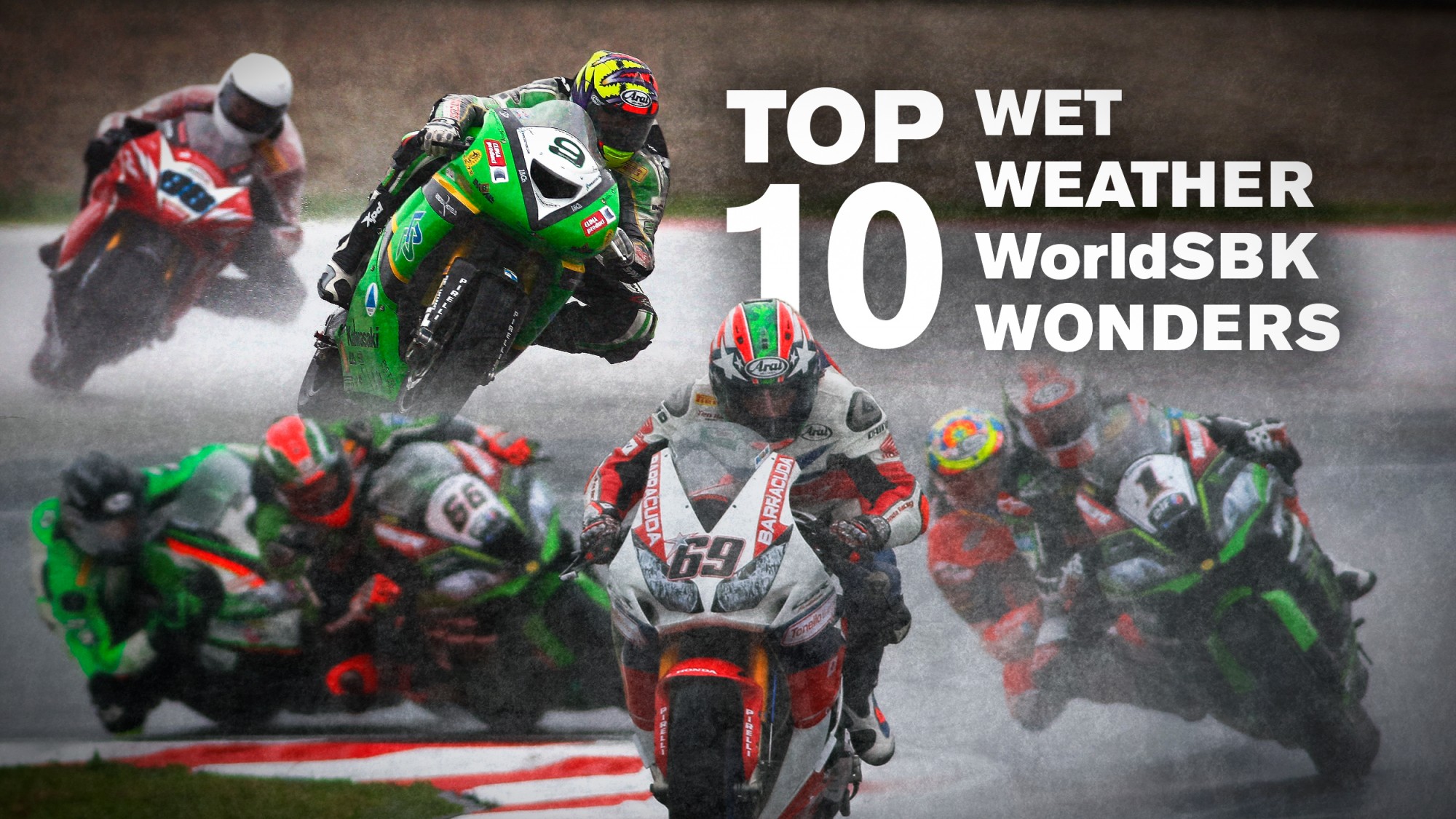 The countdown to number one is on, and there’s certainly no dampening of spirits in these classics…

The 2020 MOTUL FIM Superbike World Championship continues to rest and stay safe meaning we are reminiscing about some of the most incredible wet races in the Championship’s history. After the drama of Part 1, there’s more success stories packing out the top five in Part 2!

After a first podium at Assen, Nicky Hayden didn’t have to wait very long for his first win. The rain of Malaysia gave him and his Honda CBR1000RR Fireblade a level playing field and with a strong start, Hayden built on his advantage lap after lap. However, a late race charge from Davide Giugliano saw the gap sliced to under a second as the last laps began. However, ‘The Kentucky Kid’ used all of his experience and managed the gap to become the first American winner in WorldSBK for seven years.

An incredibly unpredictable races, the last Austrian encounter was a gem. Gregorio Lavilla led initially, whilst privateer Giovanni Bussei from 17th on the grid was astonishingly second. Peter Goddard ran third but crashed, whilst another privateer, home-hero Robert Ulm, was fifth. Lavilla was passed by Chili on Lap 7, before crashing on Lap 9. Chili stormed to a Race 2 win by 17 seconds to give the Alstare Suzuki team a first win, redeeming himself after crashing whilst leading in Race 1.

Anthony Gobert returned to the WorldSBK scene in 2000 and despite riding a relatively uncompetitive Bimota, he was ready to give 100%. However, when it came to round two at home at Phillip Island, he put in one of the most incredible rides in WorldSBK history. With a gamble on tyre choice, he led at the end of Lap 1 by nine seconds and at the end of Lap 7 by 40. He stunned at home to beat Carl Fogarty by 26 seconds at the line; it would be Gobert’s last win and Foggy’s last podium.

The most heroic race comeback in WorldSBK in a completely unpredictable race. Starting from 13th, Chris Walker ran off at Turn 1 at Assen during Race 1 in 2006. More than 20 second back, his race looked all but over. However, crashes for Yukio Kagayama, Troy Corser, Troy Bayliss and Noriyuki Haga meant that suddenly, combined with his phenomenal wet weather pace, Walker was in the hunt. Astonishingly, he took the lead with seven laps left, cruising to his first and only WorldSBK win.

Tyre gambles don’t often unfold as intended but Pierfrancesco Chili struck gold in this Italian thriller. Despite rain before the race start, Frankie went for an intermediate rear tyre; it sent him back to 11th but as the rain stopped and the track dried, he cut his way through the pack. 10 to go and 10 seconds behind race leader Regis Laconi, Chili pushed hard and with the bike sideways and smoke pouring off his tyres, the 40-year-old hit the front on the last lap to take his last win. A classic final lap battle, with rain and with home win for Chili and Ducati; this is a deserving number one wet race!

Don’t forget to enjoy the 2020 World Superbike season when racing resumes with the WorldSBK VideoPass!