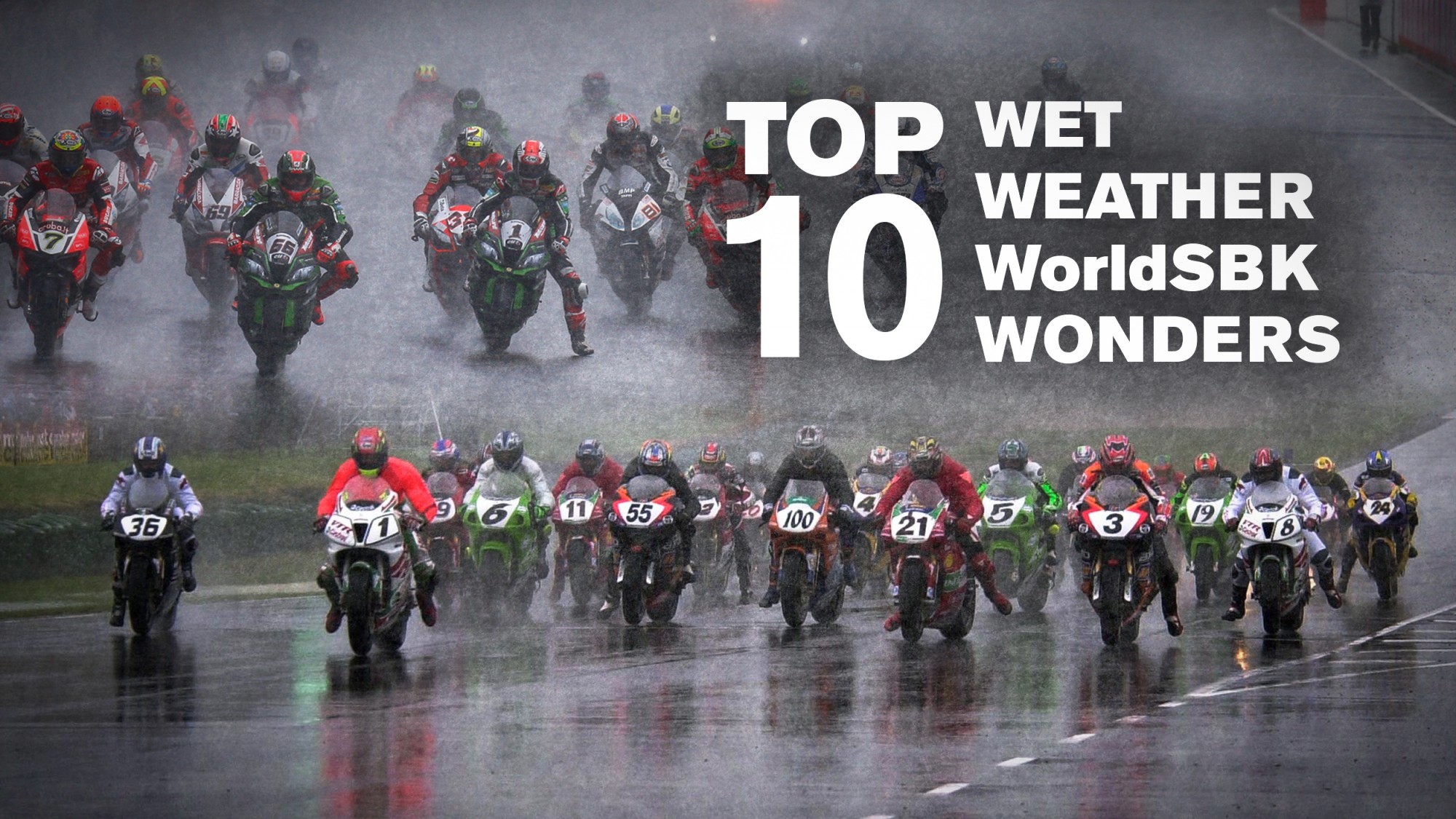 If this doesn’t whet your appetite for World Superbike racing action, we don’t know what will!

The pause continues for the 2020 MOTUL FIM Superbike World Championship but that means we have time to look back at some of the most phenomenal wet weather races in the Championship’s history. From modern thrillers to vintage favourites, Part 1 is crammed with craziness and more!

A more most recent wet race, Jonathan Rea was about to re-enter the title fight at Misano. Delayed starts, a red flag, it was third time lucky as Race 1 kicked-off. Yamaha’s Alex Lowes hounded Rea before leading, although it didn’t last long; crashing out, Rea eased to victory. Other big stories saw Tom Sykes take a heroic second and BMW’s first podium in 6 years, whilst Loris Baz gave Ten Kate Yamaha a best result in fourth and Yuki Takahashi gave Honda a then-best result of 2020 in 8th.

The typical British weather played havoc in Race 1, as Colin Edwards and Troy Bayliss continued their Championship battle. Lap 3 saw Bayliss fall whilst leading at Vale but remounted in 23rd. Fighting back in style, Bayliss made the opposition look like they were standing still. However, he crashed again, this time at Luffield. Remounting a second time and eventually finished fifth, whilst Edwards took his second win of 2002 whilst it was a career-best finish for teammate Mark Heckles in sixth.

After back-to-back DNFs, including a Race 1 crash, Jonathan Rea didn’t want to lose points to those behind him in the standings. Tom Sykes was second overall going into Race 2 but crashed on Lap 1, whilst Race 1 winner Chaz Davies could only manage sixth in the race. Rea escaped and achieved a magical win, but it was rookie Alex de Angelis who came home second ahead of Xavi Fores. Both achieved their first podiums, with de Angelis giving San Marino their only WorldSBK rostrum.

This was a race of patience from the off in awful weather; rookie Tadayuki Okada led before Troy Bayliss passed, with Colin Edwards was in contention too. Only 15 of the 33 starters finished as fast-charging Ruben Xaus fell, as did Regis Laconi and Broc Parkes, although Parkes remounted, finishing fifth. A treacherous and testing race, Edwards took victory, beating teammate Okada and Bayliss. Riders not in the top eight were a lapped and Race 2 was cancelled due to the worsening conditions.

With rain threats, Moscow’s 2013 Race 1 gave drama from the off. Chaz Davies led early amidst the chaos; Tom Sykes’ ZX-10RR burst into flames whilst rain came. The first flag-to-flag race occurred, despite parts of the track being dry. Tyre gambles and crashes followed, and leader Davies and BMW teammate Marco Melandri pitted together. Pandemonium ensued, Melandri hit the front to win ahead of Davies. The round was overshadowed by the loss of Andrea Antonelli in the WorldSSP race.

With Part 1 complete, check back tomorrow (May 6th) to find out which race takes top spot in Part 2!

Watch the 2020 WorldSBK Championship when racing resumes with the WorldSBK VideoPass!